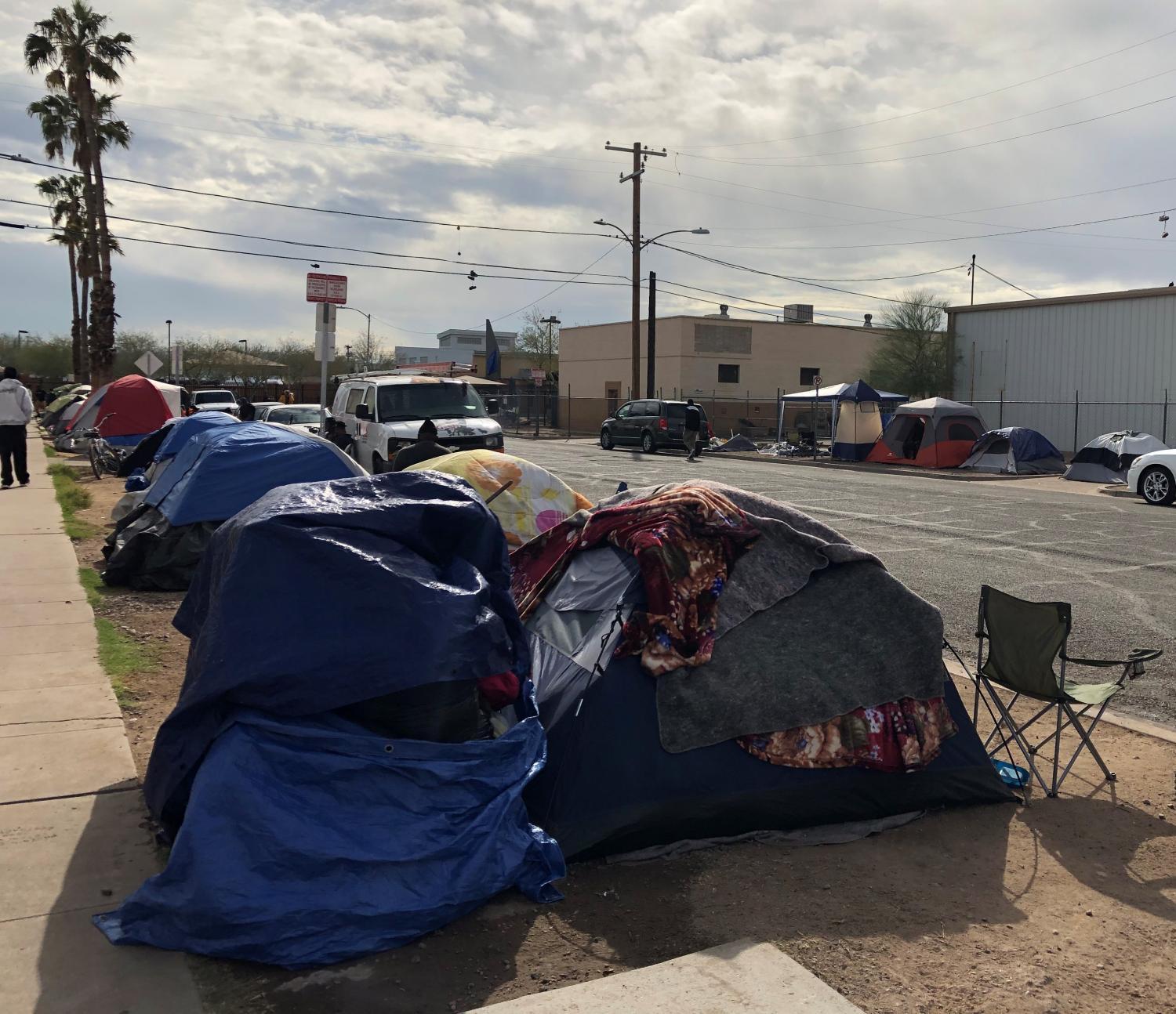 Scott Bourque / KJZZ
Tents line the sidewalks near the intersection of 12th Avenue and Madison Street near the state Capitol on January 29, 2020. This location has one of the highest densities of people living on the street in Phoenix.

STEVE GOLDSTEIN: Central Arizona Shelter Services or CASS has reported a nearly 40% increase in the number of seniors who have sought shelter from homelessness in just the last three years. CASS is the state's largest emergency shelter, and yet even it doesn't have enough space to take so many people in. People who are largely becoming homeless for the very first time in their lives. The crisis has now caught the attention of state officials as it shows no signs of slowing down. Republican state Sen. David Livingston has introduced a bill seeking emergency funding to house homeless seniors. I spoke with the senator earlier and started by asking him how we got here and when he became aware of the problem.

DAVID LIVINGSTON: We're having a growth, an unprecedented growth in senior homeless. Tell you the truth, nonprofits and homeless issues is not my specialty. I'm the budget guy. I do insurance and pension stuff, and they've been working a few years to try to get this done. And they just couldn't. And when they came to me and say that we really need your help, and they presented me the facts, I'm like, OK, I get it. You're right. We need to do this. We need to fight for this.

GOLDSTEIN: And the number we're seeing at this point, at least the proposed number is $5 million to address that need upfront. Do you have thoughts at this point how that money would be distributed?

LIVINGSTON: Yep. So what we're looking to do on the west side of town in Maricopa. It's my heart of my district is Sun City West. So dealing with seniors is what I do all the time. To build a shelter that has somewhere between 150 and 200 beds. They've actually identified two different properties that may qualify. So the $5 million is to build the property and put most of the equipment in. One of the things I've been trying to work with the different nonprofits on is making sure they have ongoing sources of revenue and that they also are partnering with all the cities on the west side of town. And that is happening.

GOLDSTEIN: Is $5 million, in essence, meant to see how things are working, see how effective $5 million is? Are you going to observe it and say, well, maybe there needs to be more in the future? Is it sort of a give and take there?

LIVINGSTON: It's always a give and take. I think for this project, $5 million is the right amount. It will be able to buy the land and build the building. And I think put all the equipment inside of it, but they can get some of their equipment donated also. If this is really successful — and I expect it to be — what we may do in the future, build one of these maybe in the East Valley or down in Apache Junction or out in Yuma. Those type of things. This is kind of a new model to have adult homeless come together and have different providers coming in and provide services to them, because it's a big difference if somebody who's 55 or 65 and they're homeless versus somebody who's 25. There's different needs.

GOLDSTEIN: On our program, we talked with Lisa Glow of CASS, the Central Arizona Shelter Services. And one of the things she pointed out is that the belief of these smaller, more contained models really are the future. It sounds like you agree with that.

LIVINGSTON: I do. Because I think — well, you know, I've never been homeless — but if you're homeless, if you're going into a smaller shelter that you get didn't know the staff, I think you feel more comfortable versus going into a big hotel type thing. And with the cities coming in and providing services and other nonprofits providing services, a lot of the homeless adult have disabilities. And if it's diabetes or heart problems or other disabilities, even though the economy is great and unemployment is really low, If you have this if you have disabilities, it makes it that much harder to get a job.

GOLDSTEIN: Indeed. You mentioned you're a budget guy, but I'll still ask you this. Is this part of a long term solution? Are there ideas that, as you've been looking into this from a money standpoint, are there other ways to keep seniors from becoming homeless to begin with?

LIVINGSTON: That's a little bit out of my specialty. You know, I think education in general helps. I think a good economy helps. But there's a whole bunch of reasons why people become homeless. And I don't think there's one answer. I think it's a combination of doing things over time and having Republicans and Democrats and independents work together to solve this. And if somebody is homeless, they don't wear a badge and say, "I'm a Republican or Democrat." They're just homeless.

GOLDSTEIN: And you also see this as a potential money saver for the state, right?

LIVINGSTON: Well, what the homeless use ERs all the time. They go into hospitals for this issue or that issue — sometimes just to get IVs, sometimes just to get food and a place to stay. Well, there's nothing more expensive than going to an ER. The costs ... homeless, ongoing, on the streets and going to an ER can easily be over $30,000 a year. Where a shelter, the cost is around $10,000 figure. And that's a lot of savings. I mean, somebody has to pay those hospital bills when people show up and they don't have any insurance and they're homeless. It basically comes back to the state.

GOLDSTEIN: It's been a problem for a while. Why do you think action has been taken sooner? Is it an economic situation? Is it an educational situation? How would you describe it?

LIVINGSTON: I actually asked CASS that exact question because Lisa just such a wonderful person, and they've been down here with are two or three years to do this. The House and the Senate, and hen we're in session, it's not designed to pass bills. It's really designed to kill bills. And sometimes it just takes a couple years of working with it and finding out what the issues are and getting a team together that we work on it. Because bottom line: you have to have 16 votes in the Senate and 31 in the House, and the governor need to sign the bill. And I'm hoping we can get this done. I think we're going to be able to. But it's always difficult.

GOLDSTEIN: That a state Sen. David Livingston. Senator, thank you.