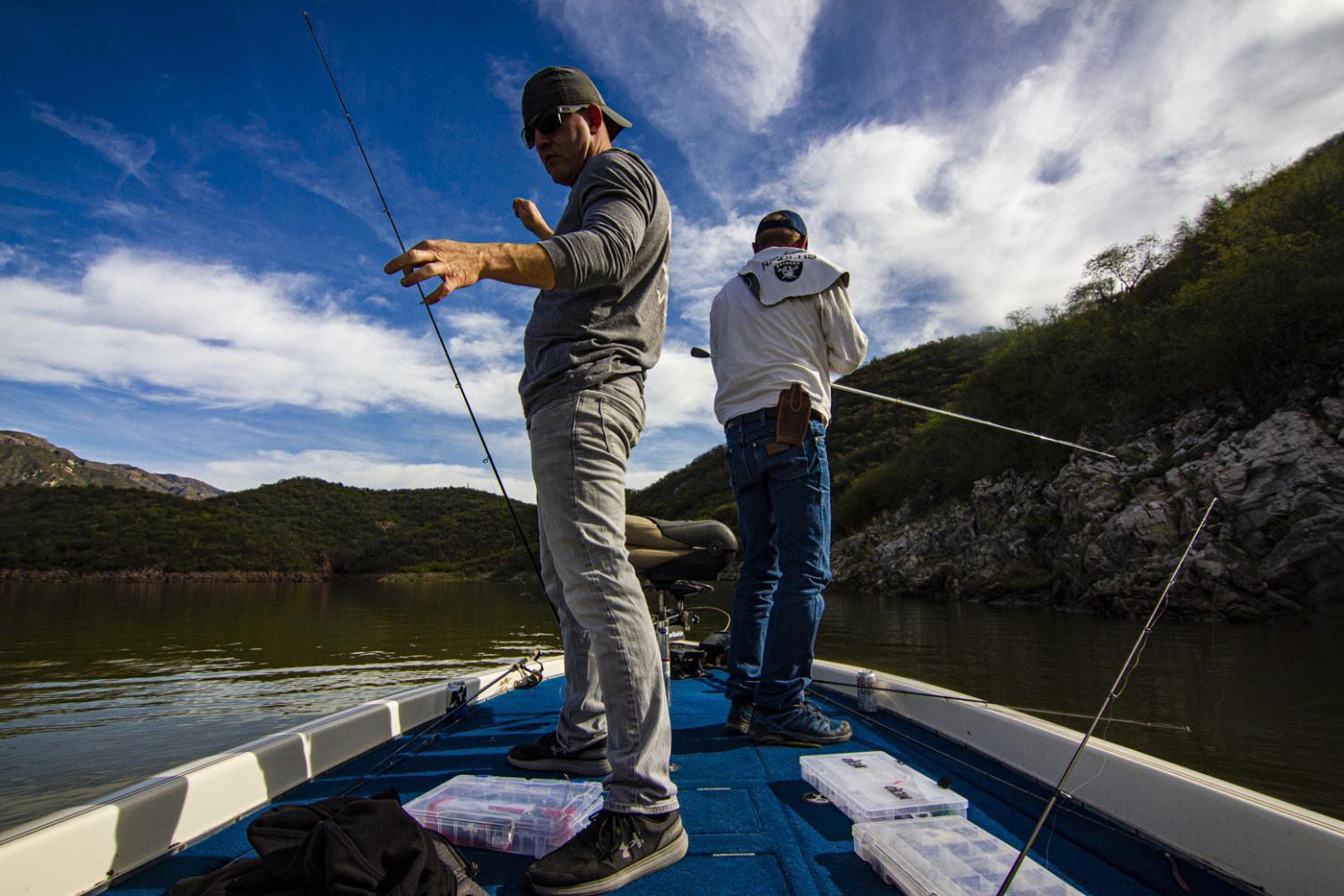 Murphy Woodhouse/KJZZ
Trevor (left) and Gary Chitwood at the tail end of the second day on the lake.

Gary Chitwood had fish on the brain.

“You getting excited?” I asked him at a gas station on the outskirts of Hermosillo just before Christmas. “I’m ready to go fish,” he replied. 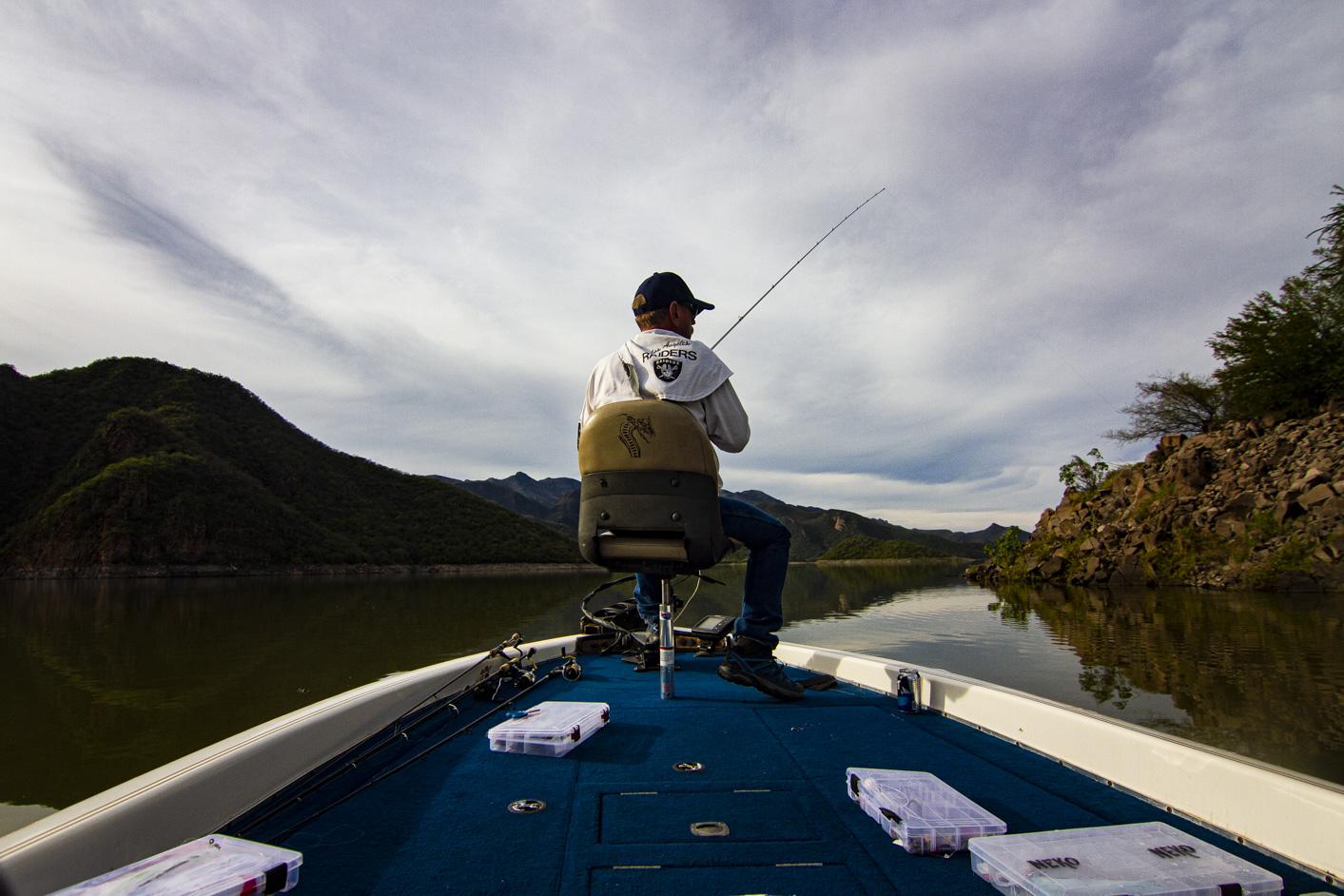 He and his adult son Trevor Chitwood had been driving since well before dawn from Payson. It was Trevor’s first visit to his dad’s beloved Sonoran spot.

From Hermosillo, it’s a more than two-hour drive deep into the rugged Sierra Madre foothills to San Pedro.

The sleepy town of around 1,500 people sits at the north end of the massive El Novillo reservoir, whose snaking fingers stretch for miles.

At Gary’s simple home in town, father and son got their boat and gear ready for the first day on the water.

“So what I’ve done is I’ve rerigged these with all different lines for the different lures to match ‘em with the rods that we’re going to throw.” Gary explained.

“So, he’s got 37 different setups so that he can find the magic combination,” Trevor responded with a laugh.

For about five years, Gary tried to make a go of it on pro bass circuits. The fruit of that is a great deal of angling wisdom. But it also came with sacrifices.

“My boys were playing Friday night football, and I was on a lake in Arizona, and I couldn’t watch. I couldn't be there,” he said. “They were all good athletes, and I’ll always hear the next day, ‘Hey, you should have seen what your son did.’ And so, at that point, I decided, enough’s enough.” 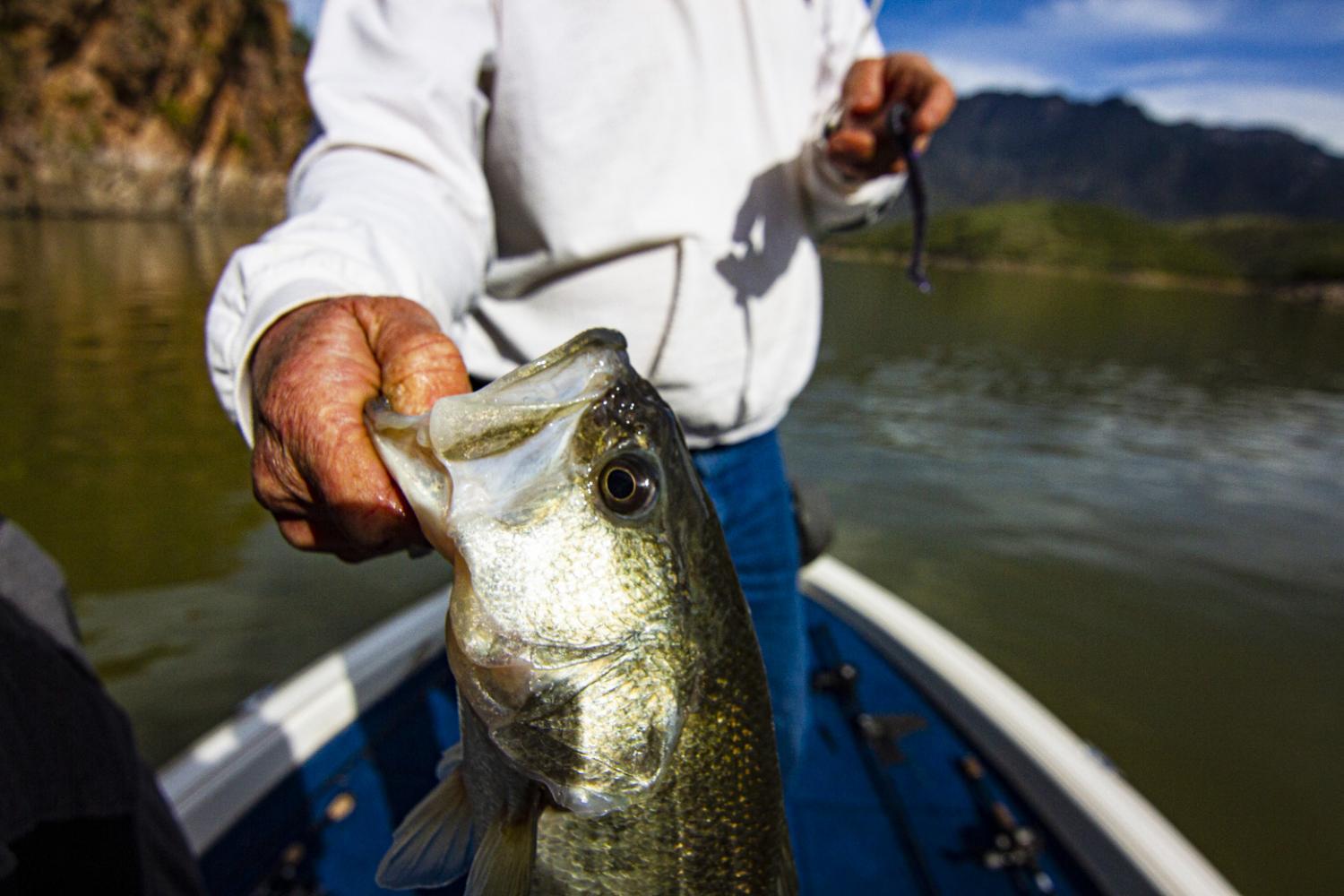 Murphy Woodhouse/KJZZ
Gary Chitwood shows off one of a number of fish he caught the second day on the lake.

And now he mostly fishes for pleasure, and comes down to San Pedro as often as he can. He bought a place here about 15 years ago, joining the sizable, seasonal community of Arizona and other U.S. anglers.

“This lake has no pressure, there are good fish, there are good people here, the atmosphere here is so good,” he said of San Pedro and the reservoir. “I just keep coming because it’s where I come to hide.”

About 12 hours after leaving Payson, Trevor, Gary and his new boat were on the water, and they had it almost to themselves.

After figuring out the boat’s ins and outs, we sped south in search of promising banks. But the conditions were less than ideal. Late season rains had brought a welcome rise in reservoir levels, but also debris and turbid waters.

That didn’t stop Trevor from getting the trip’s first fish in the boat. But it was otherwise a slow start. Before heading back, Gary put together a game plan for the next day. 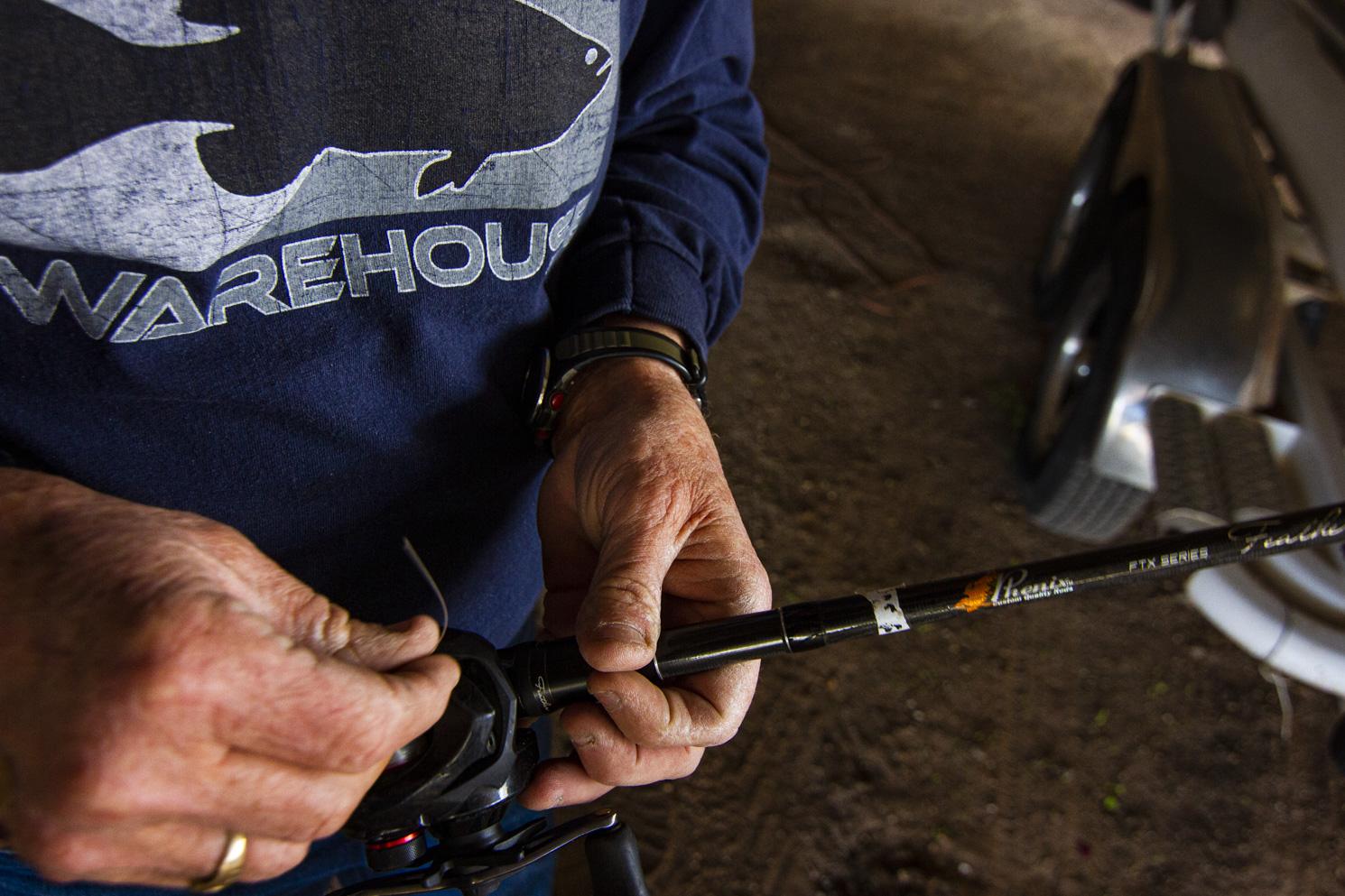 Murphy Woodhouse/KJZZ
Gary Chitwood preps one of many bass rods he took to San Pedro.

“Yeah, we’re prolly gonna have to go up the Yaqui, or go to Big Lake. All the way to Big Lake,” he said. “That would be the clearest water.”

American anglers have been coming to El Novillo since the dam first filled in the mid-1960s. The head of one of the San Pedro clubs estimated there are hundreds of foreigners who flock there in the high season.

To get a sense of what those visitors and residents mean for places like San Pedro, I met up with the state’s fisheries sub-secretary, Juan Pablo Verduzco.

“Sport fishing, since it started but more so in recent years, generates a sizable economic impact in the communities where it’s developed,” he said.

That’s why the state is undertaking an effort to improve the quality of bass specimens in Sonoran reservoirs. This year they’re also starting to allow anglers to get their permits online.

“And we think there’s even more potential if we promote it,” he added. 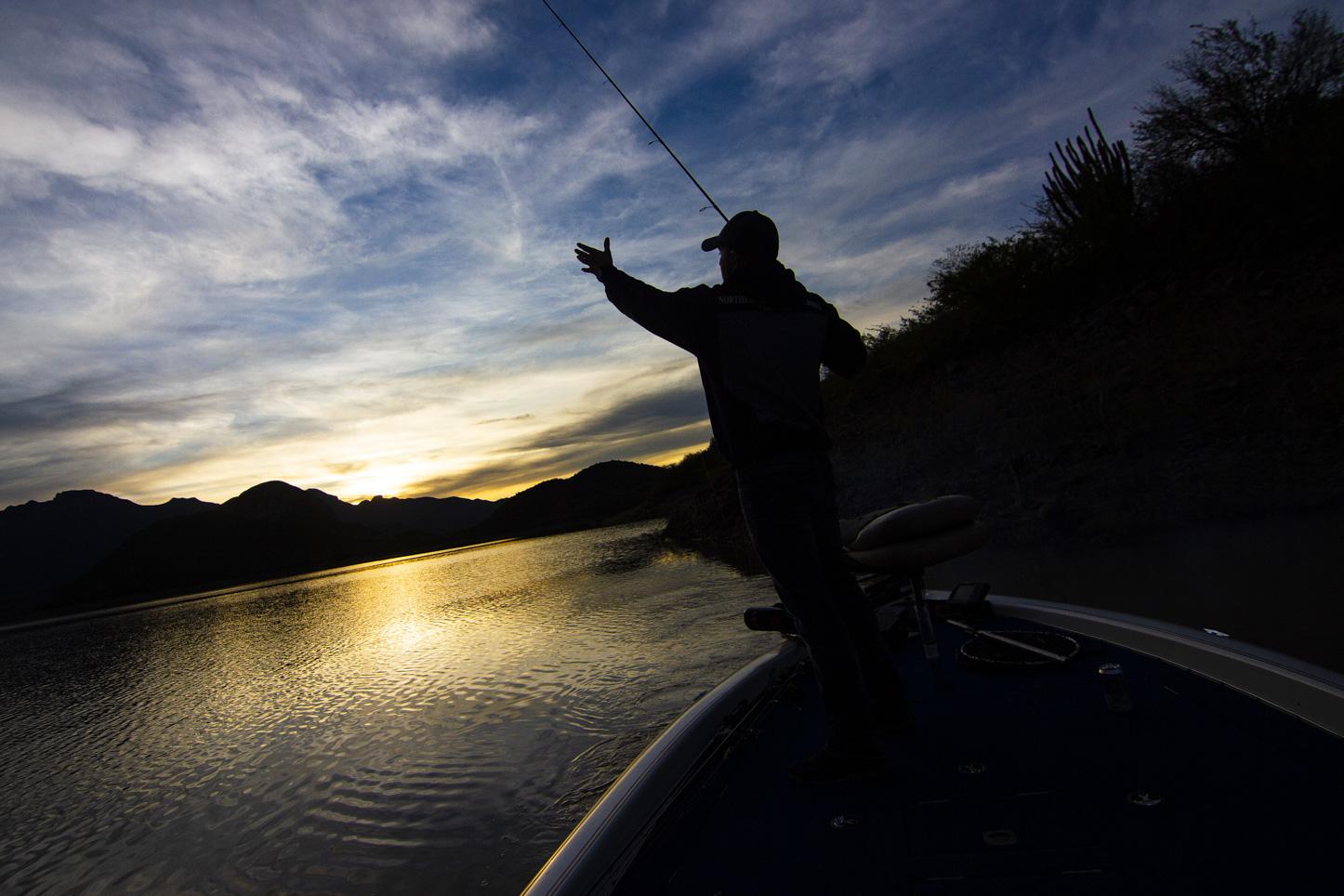 Murphy Woodhouse/KJZZ
Trevor Chitwood didn't have a great first day, but he said the spectacular scenery made up for it.

At the southern end of El Novillo the next day, the water was much clearer. That — and a switch to an unlikely lure — brought the hoped-for change in luck — at least for Gary.

They came one, right after the other.

“We seem to have found something that works. A five-inch lizard’s what’s working,” he explained. “Black seems to be the color.”

The lizard even ended Trevor’s dry spell, just as the sun was getting low over the towering lakeside mountains.

"We’re not going to starve tonight,” Gary said triumphantly. “Here’s what I know. Tomorrow we’ll have a boat full of black lizards, and we will load this boat.”

And with a promising strategy ready for the next day, we packed up and sped north.