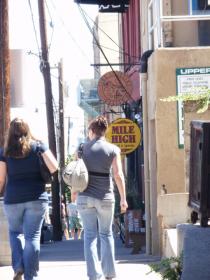 The town of Jerome is known for a lot of things: a raucous past, ghosts, wine and historic homes. Many of those homes have been available as short term vacation rentals – until now. Officials recently told homeowners they’re in violation of Jerome’s planning and zoning regulations.

Situated atop Cleopatra Hill in central Arizona is the tiny town of Jerome. Many of the homes there are more than a hundred years old – like the John Riordan House. Owner Glenn Odegard purchased the 117-year-old, dilapidated property in 2012 with the intention of restoring and renting it:

"And I went through every legal process, obtained proper building permits, signing and zoning approval, design review board approval, got business licenses for operating as a business, so until this came along, I had done everything to the letter of the law," said Odegard.

Odegard and three other homeowners have now been told by officials that it’s illegal to operate short term vacation rentals – and has always been illegal. And that’s the catch. Jared Blanchard is with the Goldwater Institute and represents Odegard and the others.

"This unfortunately looks like an attempt by the town to evade compensating the owners for a loss in their property rights, which their entitled to under Arizona law – notably Proposition 207," said Blanchard.

Under Prop 207, the government has to compensate owners when they enact new or modify existing land use regulations. Jerome town officials said they would not comment at this time. A hearing will be set to determine if the rentals can remain open for business.