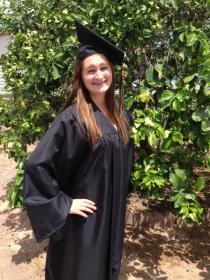 (Photo by Alexandra Olgin - KJZZ)
Ashley Berrier, 21, will walk at graduation with her tassel from 2012. 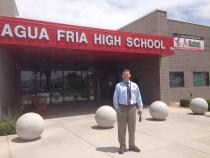 (Photo by Alexandra Olgin - KJZZ)
William Nelson found a majority of the high school students from his district who got diplomas were from Agua Fria High School in Avondale.

A high-school diploma opens doors to college and higher paying jobs. But as many as 5,000 students in Arizona may have missed getting a diploma over the past nine years because they failed a critical test. This graduation season, they have a chance to turn that all around because of a change in state law

“It came to be the last couple of days of senior year,” she said. “I got pulled into the counseling office and they told me that I wasn’t able graduate with my class or walk with my class because I didn’t pass math AIMS.”

AIMS was the standardized test Arizona seniors needed to graduate beginning in 2006. But this past February, Gov. Doug Ducey signed a law removing that requirement, which means students like Berrier are now able to get their high-school diploma retroactively.

“These past three years have been kind of hard without a high-school diploma,” she said.

Since keaving Apache Junction High School, she’s been working at Paradise Bakery and Village Inn. Barrier said it’s hard to get other jobs with a diploma or GED.

Failing one of the AIMS test is common. As many as 60,000 juniors and seniors this year have failed at least one of the three math, science or writing subject exams. But that won’t impact their graduation, as long as they complete all their other credits.

Arizona Department of Education spokesman Charles Tack said it’s hard to know exactly how many former students qualify for these retroactive diplomas because credit requirements for graduation have changed over the past few years.

“The credits come into play now because students who are going to look for diplomas, if they don't have those additional components,” he said. “They won’t be able to graduate.”

Tack estimates somewhere between 2,000 and 5,000 students will be able to get their retroactive diplomas this year. The department isn’t requiring schools to give them out, but Tack said it’s encouraging schools to do so, as long as former students meet the current graduation requirements.

“It made our whole office excited when we talked about it. We said we are going to get these kids a diploma,” he said. “It’s infectious!”

With a team of data analysts, Nelson dug into transcripts as far as back as 2010 to find students who qualified for the diplomas.

“It took a lot of time. We wanted to make sure that we were doing it right,” he said. “We made sure our information was correct we made sure we had the right addresses.”

Nelson didn’t stop there — he even set up a hotline for students to call.  And after three months of work, he was able to send out a batch of 40 diplomas.

Back on the other side of the Valley in Apache Junction, Ashley Berrier is preparing for her new life as a high-school grad. She wants to be a flight attendant.

“I’m going to apply to Southwest and Hawaiian Airlines,” she said. “Now that I’m 21 and have my diploma, I can immediately apply for it.”

She is going to take part in all of the pomp and circumstance of this graduation seven years in the making.

Seven other former Apache Junction students will also get their diplomas this year.