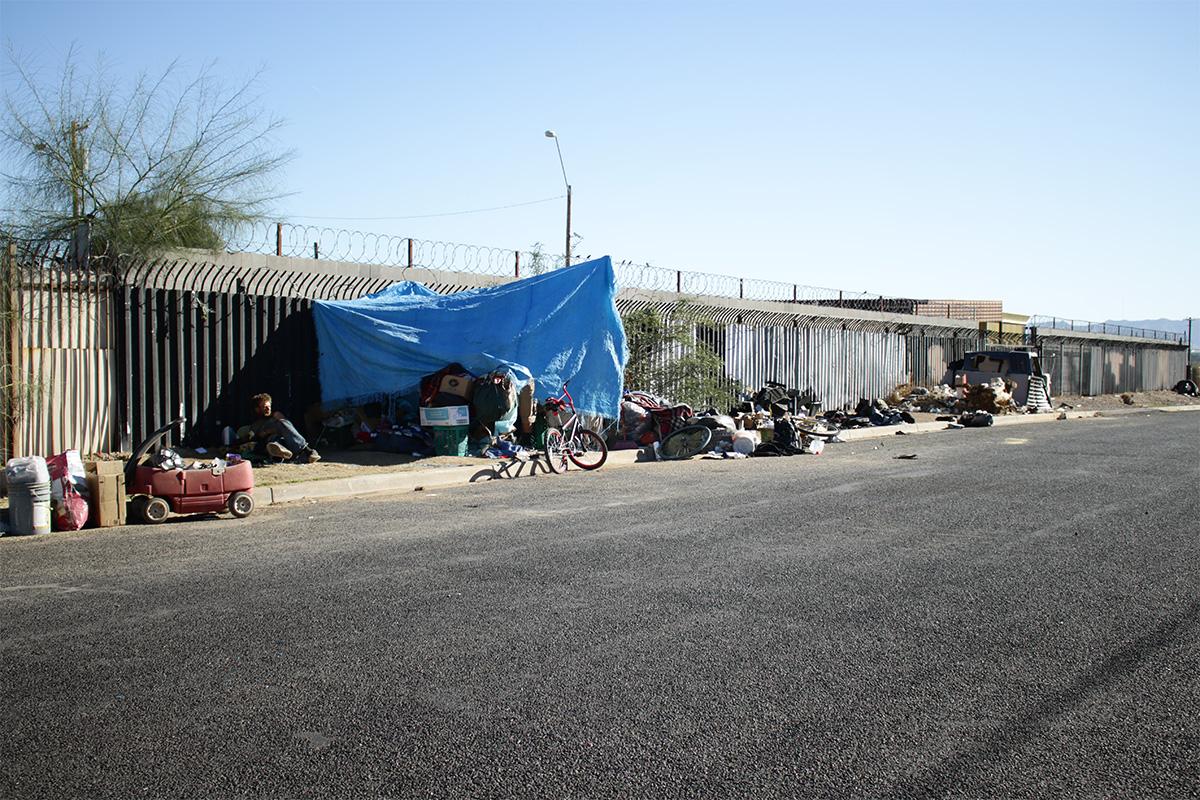 ANNETTE: Been homeless since May of this year, and the reason I became homeless is because I was taking care of an elderly man, and he became seriously ill. And I was no longer able to take care of him successfully. He needed more medical attention that I could do for him, and he needed to go into a proper hospitalized facility. And therefore, I was put out of a job. And I had nowhere else to go.

GILGER: Annette, who only wanted to be identified by her first name, is one of a growing number of seniors who are homeless in Arizona, Central Arizona Shelter Services (CASS), the state's largest emergency shelter, reports a nearly 40% increase in the number of seniors over the age of 62 in their shelter in the last three years.

ANNETTE: I had been homeless years and years ago, and things were looking up. And then all of a sudden this disaster happened. And I had no idea this was going to happen. It was, you know, it just came from nowhere. And now I've just been put out on the shelf.

GILGER: Today, seniors make up about a third of the people CASS serves. And it's happening at a time when the shelter is already over capacity. Each month, hundreds of people, often up to 500, are turned away from the shelter. Last year, nearly 250 people living on the streets died. Ninety five of them were over the age of 55.

ANNETTE: So many are in wheelchairs with walkers and canes. And I don't know what potential they have for further employment themselves, or if they're even over the age of employment. But it's very disconcerting to me that so many people are just out there with nowhere to go, no home, no family. And it's overwhelming.

GILGER: Lisa Glow is the CEO of CASS. I sat down with her to talk more about the growing problem of homeless seniors and why her organization is sounding the alarm about what she calls a humanitarian crisis.

LISA GLOW: On the ground here at CASS, we've seen a dramatic shift in the number of senior citizens — 55 and older and 62 and older — becoming homeless, and most of them for the first time in their lives.

GILGER: And what's behind this? I mean, there are obviously multiple factors here. But this is a sizable enough trend that there must be some broad strokes.

GLOW: The broad strokes are largely due to economics. A lot of senior citizens have a fixed income. They may no longer be employable. They may be medically frail and have a medical condition and use all their savings. They're living one check to the next. Social security of the people who are staying here in our shelter ranges between $600 to $800, some it's higher. So it's a confluence of factors that are economic. When you can't pay a rent increase, which is happening here in Maricopa County and throughout the country, when you can't keep up with your rent, you have to choose: are you going to stay in housing, or ae you going to buy food and medication? And a lot of people are ending up being forced into homelessness who are older, who never imagined they would become homeless.

GILGER: So affordable housing is definitely one of the big narratives behind this. I want to talk also about lack of savings, lack of retirement plans. Like I'm reading a little bit about this. It looks like more seniors are renting, more seniors are retiring with less in the bank account than they have in past generations. Are you hearing stories like that?

GILGER: And during that period of time, they can face some serious consequences, whether it be health consequences or further financial complications, right?

GLOW: Absolutely. So if you're evicted or you move out from somewhere because you don't have sufficient funding, it's not going to be easy to get back into housing. If you're older and you've lost a job, or you can no longer work because of medical conditions — and those are all the stories we hear here at the shelter — it's going to be really difficult to get back on your feet. If there's not the affordable housing to go back to, obviously, that's a barrier. On and on, the challenges that seniors face. They do have higher medical conditions, and we track all of that. Nearly 69% of them have one or more disabling conditions, chronic health conditions, disabilities, wheelchairs, other physical disabilities, mental health issues. It presents other significant challenges. So you can't work. You have physical disability, mental health disability. Your income isn't enough to pay for the rising rents. There's not enough housing. This is the crisis.

GILGER: Perfect storm right there. I want to talk then about the unique challenges that this presents to organizations like yours, like this large shelter system that supports so many people, which probably was not built for this population, right? This has been a shift we've seen just recently.

GLOW: Absolutely. I think that we should have anticipated this. It's easy to say, looking back, we really should have seen this this coming. And it is going to get worse. But we need to take actions, and we can now. So here at our shelter in downtown Phoenix, we have 470 beds. Monthly, we turn away 500 people, approximately, who need shelter. So there are people living on the streets who want to get off the street. So we don't have enough beds, number one. Being able to properly meet the needs of a growing population with even more needs is a second challenge. Some of the solutions we are looking at is building a model program for senior citizens. And secondly — and I think this is the one that's really needed — is building a smaller shelter in another part of the county just for the 55-plus population that is tailored to meet their unique needs. Smaller shelter models are really the trend of the future for specialized populations. And that's exactly what we want to do this legislative session and seek funding, one time capital to get it done.

GILGER: What are the specifications of a shelter like that too, even? How is it different when it's specified for this population?

GLOW: So it's smaller to begin with. Here's 470 beds. It would be maybe 150 — 130 to 150 — smaller, easier to navigate, and we would have more specialized services helping the seniors get on ALTCS (Arizona Long Term Care System) and various disability supports, better meet their medical needs. So having hospital dropoff-like beds for those seniors, rest kind of areas, things to treat people and even identify people with dementia. We'll have people coming into our shelter — we're not trained to spot that, although we're working on getting trained. We're sending some staff to training. But a more specialized kind of model that can help people move on more quickly. Last year we had nearly 1,400 seniors out of our 4,300 here at our adult shelter, who were over the age of 55. Let's say we're able to build a shelter with 150 beds. The majority of those could stay in that shelter and get more specialized treatment and services and help end their homelessness and end their suffering, too.

GILGER: CASS, I know, has also just received a pretty sizable grant to build a model program for seniors. What does that look like? Is this all part of it?

GLOW: Absolutely. So we just received a three year grant from the Piper Trust, the Virginia G. Piper Trust, which we're so grateful for. It will allow us to build a model program for seniors. We're going to be hiring additional case managers to work just with the seniors, doing outreach, doing a more intensive screening of their needs. We also need to influence the housing development. And by that, I mean, how are we as a community going to build more housing for the seniors? And just as importantly, keep more of them out of homelessness so that the disconnects between the partnerships through the non-profits, we're going to build that connectivity, and we're already starting with that. And just as you start to ask the right questions and get the right services linked, you can help people better. It's quite simple in many ways, but you've got to have the staff, and you've got to have the plan to move it forward.

GILGER: So the last thing I want to talk about is just sort of the the bigger picture, what you think needs to change. This seems like a societal shame almost and a societal problem that we should address as a society. How do you think, in the grand scheme of things, we should address this?

GLOW: I think we need to start calling the homeless crisis a humanitarian crisis. Here in the richest nation in the world, housing should be something that we are intentional about for people. People who are homeless now, the vast majority and certainly most of the seniors, they've had housing, and — for reasons that are not their fault, or maybe they made a bad choice or had something unfortunate happen to them, or a spouse died — they become homeless. We don't have a safety net for people. So I do think the lack of affordable housing that's led to a homeless crisis is a humanitarian crisis. And the more we pay attention to it and put our heads together, we're gonna be able to solve it.

GILGER: Lisa Glow, CEO of CASS, thank you so much.

EDITOR'S NOTE: This story's headline has been updated for accuracy.