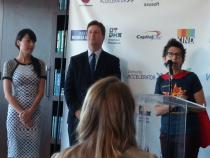 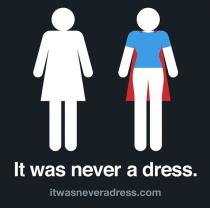 (Photo via itwasneveradress.com)
The logo of the "It Was Never A Dress" campaign to engage girls in STEAM. 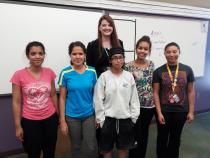 Metro Phoenix is becoming recognized as a diverse hub of technology entrepreneurship. But the tech industry is still having trouble attracting some groups, particularly young women.

San Francisco-based Girls in Tech is nonprofit that engages women in the technology industry with 22,000 members across the world. CEO Adriana Gascoigne explains why their inaugural Catalyst Conference in April was in the Valley of the Sun, not Silicon Valley.

“There’s a huge, diverse group of people and there’s a lot of talent here," Gascoigne said. "And in any tech hub around the world, you see that talent and diversity create creativity and innovation, which is the foundation to any tech ecosystem.”

At the conference was Tania Katan with Axosoft, a Scottsdale-based software company. She launched the “It Was Never A Dress” campaign, manipulating the bathroom-sign woman dress into a superhero cape. While she hopes it becomes a symbol for girls to get excited about science, technology, engineering, arts and math, or STEAM, she knows more needs to be done.

“Actually making connections with diverse communities, so going into schools, like Title IX schools," said Katan. "We offer some mentorship so that we can show technology is actually a space and a choice or an option to pursue.”

Elyse Hallstrom, an engineer at Intel, leads a girls mentoring project at Phoenix BioScience High School. She said even at the professional level, female tech mentors are hard to come by.

“Most of my mentors at work are male, so I take every opportunity to have a female mentor," said Hallstrom. "I think theres become more awareness around the fact that female mentors are needed.”

Hallstrom said girls and boys in STEAM programs are capable of accomplishing the same work, but that girls process things differently.

"They worry more, especially since there hasn’t been a lot of female role models they think there must be some reason for that," Hallstrom said. "So when they hit that stumbling block, they see it as part of a bigger issue that they shouldn’t be there. That’s why I’m very passionate about doing these mentoring programs because if they can see it, they can be it.”

One of her mentees, Grezelda, is a sophomore at BioScience High School. She highlights how a trip to Intel inspired her to pursue engineering.

“That was really something that kind of was eye opening and, it made me feel passionate more towards the subject of engineering," said Grezelda.

At school, she feels supported, but sometimes small things set her back.

“The teachers, I feel, are very gender neutral," said Grezelda. "They help everyone, and I’ve never felt that because I’m a girl I’m not going to be capable of doing something it’s just, sometimes small remarks kind of make you feel a little bit less than, or make you think less than what other people."

Grezelda said having only three girls in her engineering class of 20 is hard. While she appreciates words of encouragement, she feels like they have a hidden meaning.

“It’s more of a challenge being a girl in engineering than it is for a man because they always say: ‘When you get into engineering, be the first girl that actually makes it out with good grades.’ I kind of feel like it’s showing that men are more capable of being successful more than a woman,” Grezelda said.

According to the National Science Foundation, females make up only 20 percent of engineering and technology bachelor’s degrees.

Vasthy Lamadrid is a former mentee of Hallstrom and is now at ASU. Once excited about STEAM in high school, she found a lack of support in college and left the engineering program.

“They would always put me to be secretary of team or to be the note taker," said Lamadrid. "And then there’s also like this underlying, you know, chivalry. So it’s like if I had to cut something like in a laser engraver, or if I had to do anything with materials, it’d be like ‘oh, let me get that for you,’ and it’d be like in a very, tone of ‘i’m trying to be nice to you.' But it’s like ‘no, like we’re in a classroom, I can do it as well.’”

“I always thought the projects that really interested the girls were leaning more towards humanitarian reasons," Lamidrid said. "We had to build a catapult, and all the girls were like, what the hell? We don’t care about this. But then when we had to talk about water filters that help other countries, and their basic needs, feel like that caring side of us came out. We were super excited. The whole curriculum, I felt like, was geared towards the male mind.”

And one male mind at the Girls in Tech Catalyst Conference, Phoenix Mayor Greg Stanton, made it very clear women must be part of the future tech workforce.

“I want young people, in particular women, to be excited about technology for their own future," said Stanton. "We’re going to have the strongest tech sector in the United States if it reflects the diversity that we’re blessed to have here in Phoenix.”

And the excitement is there. Nearly 30 students from Arizona, both male and female, will be competing in the Intel International Science and Engineering Fair in Pittsburgh all this week.