As America Freaks Out About Extreme Heat, Phoenix Could Go Outside And Embrace It

MARK BRODIE: And now we turn to our co-host Lauren Gilger with a conversation that takes a look back at the Arizona of 2019 and how the rest of the world sees us. 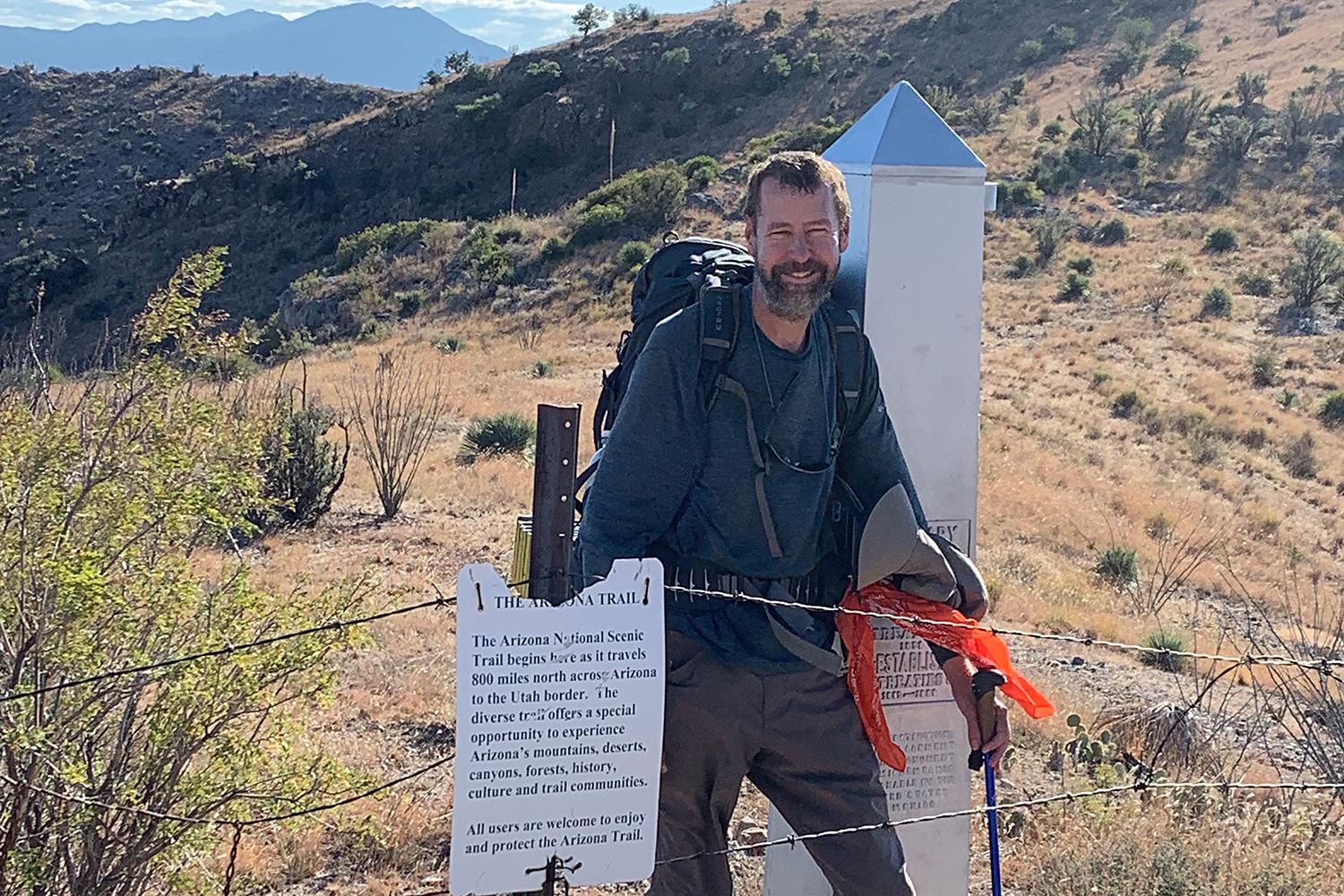 LAUREN GILGER: 2019 was not the year of nuanced takes on life in Phoenix and Arizona in general. There were headlines like 100 Degrees For Days: The Looming Phoenix Heat Wave That Could Harm Thousands from Vox and As Phoenix Heats Up, The Night Comes Alive from the New York Times that, despite some lovely photography, really seemed to hinge on the idea that Phoenix is a wasteland during the summer daylight hours. A Rolling Stone profile of Phoenix's heat paints it as something of an apocalyptic dystopia. "Sunshine assaults you, forcing you to seek cover. The air feels solid, a hazy, ozone-soaked curtain of heat," it reads. But our next guest has a slightly different perspective. Tom Zoellner has seen this state for all that it is. He is a former Arizonan. And while he now lives in Los Angeles, he recently completed a thru-hike of the famous Arizona Trail. This goes from Mexico to Utah and spans the entire north-south length of the state. Yes, he survived the trek, and he's writing about it all and life in Arizona in a book of essays he's calling "Rim to River: Journeys Into the Heart of Arizona." Tom, welcome to The Show. 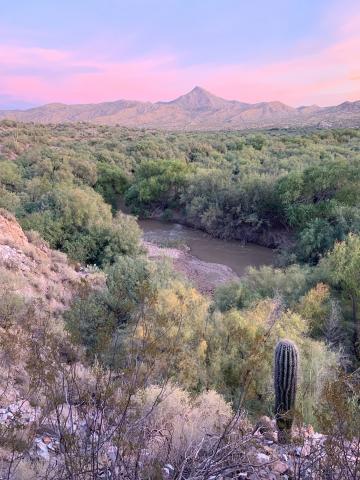 TOM ZOELLNER: Thank you for having me.

GILGER: Thank you for joining us. So I want to start with this first. Get this out of the way. You live in LA now, which may have some of our listeners rolling their eyes at this conversation. But you are not an Arizona novice.

ZOELLNER: No, no. My family has lived in Arizona since before it was a state. I've had a long and profound relationship with it. And I even tried to get hired at the University of Arizona, but that didn't work. So here I am at my university in California.

GILGER: Right. And I know you're in the midst of this book now, and we'll get into that soon. But I want to start with a little bit about your perspective on Arizona and on Phoenix. When you read headlines like some of the ones I just ran through there, what is your reaction?

ZOELLNER: Well, Phoenix has spent much of its adolescence as a city trying to defeat the desert, trying to deny the idea that it even lives in the desert. Perhaps it takes something from the canals in that regard. One of the most instructive drives anyone can take in our city is to head north from downtown on Central all the way to Sunnyslope and look at that north central neighborhood, which is founded on a vernacular of British pastoralism. You know, you look at the Murphy Bridle Trail, you look at those homes that are generously put out on these carpet-like lawns, attempting to recreate the English manor house. And in that sense, it's really interesting. I actually really like that drive. But it speaks to Phoenix's desire to push back, to deny reality, to not admit that it lives in the upper Sonoran Desert.

GILGER: So is that what is defining about the city to you, or do you think that that shifting at this point? Do you think we're starting to see the light, so to speak? 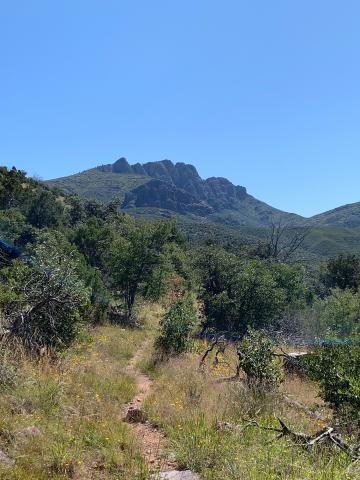 Tom Zoellner
A view of the Mazatzal Mountains.

ZOELLNER: Yes. Grady Gammage, one of the the great intellectuals of Arizona urban development, said where others see sprawl, we see our heritage. That pushing out to the margins into the desert is very much a part of the Arizona story. And that makes summer all the more interesting and challenging.

GILGER: It does. So when you see people who are not from here or don't live here or never have come in and write about Phoenix, especially in those incredibly hot summer months, what do you think they're missing? Do you think that they don't understand that kind of Grady Gammage idea that you just outlined?

ZOELLNER: They're not wrong, but there are ways to think about summers differently. And this is an essential part of being an Arizonan. The relentless, searing heat is for us not just an environmental fact of life, but part of the local narrative in the same way that snow is a part of Christmas fables or that neon reflecting in rain puddles is a signature feature of noir fiction. This is what we have. And instead of trying to defeat it through air conditioning, through these wonderful indoor spaces that we have to muddle through the summer, there are ways to embrace the summer. One of them I might suggest  is — if you can do this, if your job will allow you to do so — to embrace a kind of nocturnalism. This is what we see with, of course, Sonoran Desert wildlife — the great horned owl, the coyote, the bobcat, the gopher. They come out at night. They live nocturnal lives as opposed to diurnal lives.

ZOELLNER: Yeah. A friend of mine in Vermont describes her winter life like cave moss. You know, that sort of burrowing inside for the for the winter. And that's what we do as Phoenicians is burrow inside for the summer. But there's another way to think about that, too, which is — this ought to be a civic requirement, I think if you're if you're going to live in Phoenix — and this is what I suggest: go outside and to let it pour down on you. Not in some horrible urban asphalt heat island, but rather to go out to the desert. And I want to say to the KJZZ listeners, do this safely, by all means. Make sure you know where you are at all times and bring at least two liters of water. Have your GPS sat and charge your phone. But by all means, go out to the desert and experience the heat as it hits down on the desert. Pounds you like a sledgehammer. And this will do a couple of things. It's a reminder of the forces of nature that surround us and control us, that we try to deny and try to push back through air conditioning and technology. But it is the signature fact of life in Phoenix. And it will also, I think, provide a sense of awe for our ancestors, those who came before air conditioning, not just the first Latino and Anglo settlers, but also the the ancient peoples who in a sense made their living from the summers and understood the summers as part of the cycle of life. 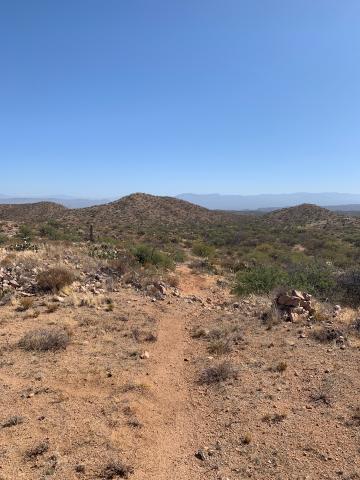 GILGER: So you just did this thru-hike of the entire state on the Arizona trail, and you're writing about it now. What did that teach you about this state and about some of maybe that history?

ZOELLNER: I developed a profound respect for water. I'll put that just as an elemental thing, where it's one thing to be thirsty and to be able to quench that, but it's another thing to be thirsty and not know that you're going to quench it and to be five miles from the nearest spring with with water running low and uncertain. And that's a way to think about Arizona in let's call it an existential way. Secondly, this really doesn't have good words to describe it. But there's places in the Superstition Mountains when you're going along at night where you can see the massive glow of the Valley on the western horizon. And to know it's there but not to be able to see it directly — it is something to know the Valley from an immediate and daytime and commercial and personal and professional perspective. But it's it's kind of another thing to be at some remove from it and see its traces on the horizon.

GILGER: Yeah. So last question for you, Tom. Arizona, Phoenix is sort of always battling with this idea of identity and people being from somewhere else. Everyone, you know, comes here from elsewhere and we're this city of sprawl and strip malls, etc. What do you see as the identity of this place, when you describe it to people and say this is where I'm from?

ZOELLNER: There's some amount of frustration in always wanting Arizona to be what it's not. And yes, we have a state whose culture — politically, especially — is defined by those who come in from elsewhere to sort of remake what we have. But accepting that, accepting that this is, in fact, Arizona and that these newcomers are just as much citizens as we are, they have something to offer and just as I do get frustrated with the same sprawl that Grady Gammage describes, part of coming to terms with Arizona, part of being at peace with it is to accept that reality and in some way to celebrate it even.

GILGER: All right. Tom Zoellner, thank you so much.