Going Behind The Scenes At Cold Stone Creamery 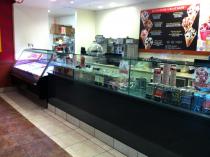 You know, sometimes journalism can be a rocky road. I mean, you sometimes have to really mint a complicated turn of phrase and…

Okay Steve, we get it. You’ve got ice cream on the brain, but there is a good reason for it, at least this time. We recently had what was easily the toughest assignment of either of our careers, touring and tasting our way through the heart of Cold Stone Creamery. But, never fear, they did not just let us loose among the pints.

"I’m the senior tastemaster for Cold Stone Creamery which amounts to research and development in ice cream," said Ray Karam.

Yup. This guy has the job you know you want. He develops...and tastes new flavors of ice cream for a living. We met up with him in his lab, and yes, he was wearing a lab coat, but instead of beakers and bunsen burners, Karem’s lab looks like any Cold Stone you would walk in to.

We met him there at 9:30 a.m. We were still trying to get rid of the taste of toothpaste from our mouths, but not Ray, as you found out.

"I gotta ask you, do you ever get tired of eating ice cream?" Mark asked him.

"Never. In fact, I had some just a few minutes ago, before you got here. I love it," said Karam. "I’ve had it for breakfast. Sometimes, I’ll be eating ice cream alone by myself, and an idea will spark."

Karam said ideas sometimes rattle around in his head like maple bacon. They also come from within Cold Stone or from whatever promotion is going on as well as charity and trends in culinary. He said the latest trends include lots of movement towards chocolate and flavors that make the tongue pop like sweet, sour, salty and bitter.

But, Karam said sales are always there for one of Cold Stone’s most popular flavors, Cake Batter. He showed us how the magic is made.

"So, we start off with the liquid ice cream mix," Karam explained.

The mix Karam starts with is sweet cream. He then adds the cake batter flavoring.

"So, here we go, nothing raw about this," Karam said.

Karam then sends the mixture into a machine, starts to freeze it, adds air and lets it gel into its more familiar form. And a few minutes later…

"Well this is pan number one. -Feel free! I never deprive someone of second spoon, including myself," said Karam.

Now, we should pause here, just to say that this was, without question, the most amazing ice cream either of us had ever tasted. It looked like soft-serve and was only seconds old when we tasted its chilled goodness.

Karam then wrapped the pan in paper, put it in the deep freezer and asked what may be a rhetorical question.

"You know, how can you be in a bad mood when you’re eating ice cream? I mean, it’s impossible," Karam said.

By that logic, yeah, Karam’s probably in a good mood a lot of the time, but our interview could not just be all cookie dough and crushed peppermint. I had to ask him about the pressure of creating flavors for one of the world’s biggest ice cream makers.

Karam said he had not thought about this, and if he did mistakes would happen. They have had very few mistakes, and he does not allow pressure to get to him.
But how does he keep ice cream an all-American thing?

Karam explained the best thing is to keep it simple, as long as you do not get too exotic like sea urchin. Have a good foundation, good American flavors and use common ingredients in a unique way.

But, that does not mean Karam is not thinking about what is next, and no, it does not include anything from the sea. That seems like a missed opportunity, but he is working on a flavor for a certain February holiday.

"I’m not a chocolate guy but I will tell you I literally crave this…" Karam said.

You just lost half our audience, thanks Ray," Steve told him.

"Well, fear not, fear not, we have more in this ice cream coming up for Valentines’ Day. Our first promotion of the year starts in mid-January, and it’s fudge truffle ice cream, and if you’ve ever had a candy, a truffle candy, great sensation, lots of ooo-ahh, I love this," said Karam. "Imagine that frozen into an ice cream, and this thing delivers. I’ve seen women’s knees buckle on this thing, just by the first bite."

Before we left, Karam let us behind the counter to show us how he teaches trainees the tools of the trade.

"Let’s do a strawberry," said Karam.

He decided to add sliced strawberries to his strawberry ice cream as well as chocolate chips and caramel.

"Now we do folding in of ingredients," Karam said. "Chop up the strawberries a little bit.

But, don not let Karam’s enthusiasm for making the ice cream fool you. Ir is all done with a goal in mind.

"The best thing to do is eat it!" Karam exclaimed.

It is a real shame he did not like that, like at all. Seriously. And if you can believe it, Ray actually let Mark have a go with the scoopers. You can see what flavor he choose by watching the video below.