Recent efforts to reclassify 911 operators and dispatchers as first responders federally are stalled. Those who work in the Phoenix alarm room, like Maria Abeyta, may not see trauma like police officers and firefighters, but they hear it.

After her break, Abeyta sits down in her chair in front of seven glowing computer screens, two keyboards and mice. She plugs her headset in and slides it through her hair.

The police radio chatter starts to filter in.

“10-4 shots fired … white male had a gun, shot up in the air then pulled a 101 into the apartment,” Abeyta tells police on the radio.

Right now, she handles calls for crimes in progress.

On a busy day like this, Abeyta and other dispatchers will answer up to 170 calls over a 10-hour shift. The calls they receive range from complaints to situations no one wants to hear.

“When my son was 12 years old, I got a call from a mom. She had just come home from work and found her 12-year-old son had hung himself,” said Louisa Pedraza, a retired police dispatcher of 33 years. “There was really nothing I could do for her except stay on the phone and talk to her.”

Pedraza says she will always remember the traumatic calls she’s answered over her career.

“That’s the kind of job that never mentally or emotionally leaves you,” said Pedraza. “There’s calls that will haunt me for the rest of my life.”

Dispatchers have to answer every 911 call, knowing it could be about a drowning or a suicide. While they aren’t physically present at the scene, sometimes being there auditorily is just as traumatic.

“When you're hearing someone find their significant other that's dead and you hear those cries —  you can't unhear that,” says Abeyta.

Despite the nature of the calls they receive, dispatchers are classified as administrative workers — not first responders. Without this classification, they do not qualify for certain benefits, like mental health leave and an earlier retirement.

Frank Piccioli, a fire dispatcher and president of the union that represents them, says dispatchers often use their sick leave and vacation time for their mental health.

“For firefighters and police, they have a 20-year retirement. And 20 years is about the maximum you really want to do this job before you get burnt out,” said Piccioli.

According to a study by Nova Southeastern University, the rate of post-traumatic stress disorder in 911 dispatchers is similar to the rate in law enforcement and firefighters and is more than three times the rate of an average citizen.

The study says dispatchers are at an increased risk of PTSD and burnout due to the nature of their work.

“It's a different type of PTSD. It's very audio centric,” said Piccioli. “We don't have conclusion to our calls.”

The National Emergency Number Association, an organization many cities model their dispatch centers after, recommends dispatch centers answer 90% of calls within 10 seconds during a busy hour. So when one call ends, another one begins.

Answering traumatic 911 calls for ten hours a day is an experience only dispatchers could understand.

“It is tiresome,” said Abeyta. “I don't necessarily talk as much when I leave work because I'm all talked out.”

Back in the call center, Abeyta prepares for the last two hours of her shift. She swallows store-bought pain medication with a gulp of water.

And she moves onto the next call.

This story was produced by students at the Walter Cronkite School of Journalism and Mass Communication at Arizona State University. Learn more about Phoenix dispatchers at cronkitezine.asu.edu/bootcamp19/911-dispatchers. 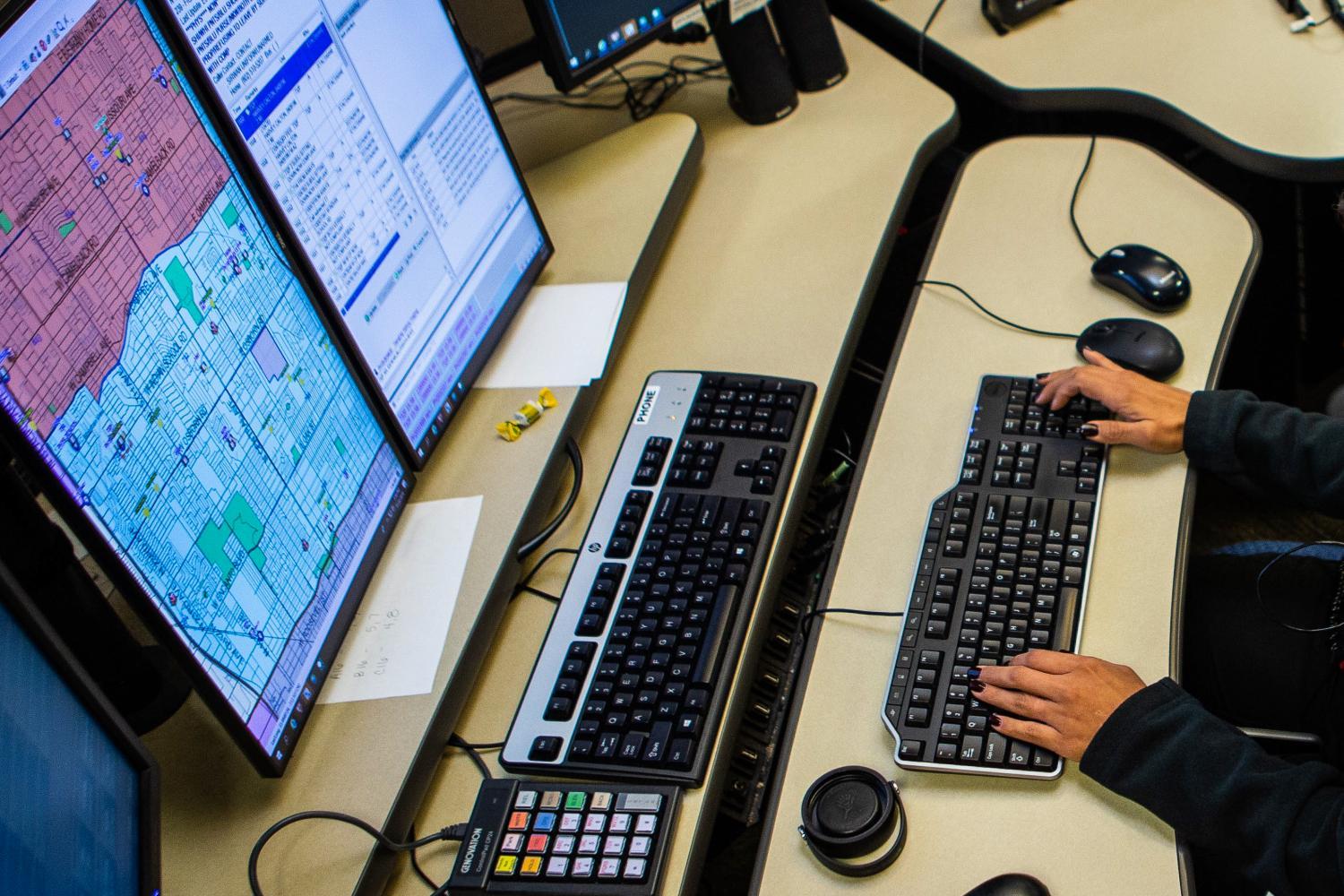 Audrey Jensen
Maria Abeyta dispatches up to six calls at a time at the Phoenix police dispatch center on Nov. 22 2019.
Business Science