Tax Cut Will Save Arizona Breweries Money, But Not As Much As You Think 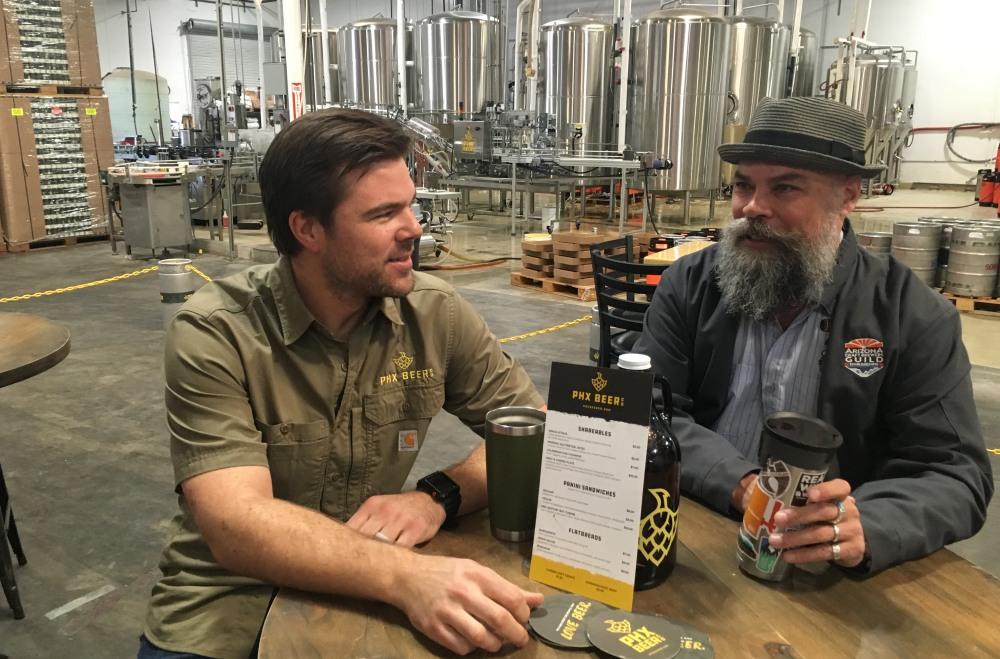 Craft brewers in Arizona can breathe a sigh of relief. They have been fighting against a tax that was scheduled to double come January, arguing it will cost jobs and expansion efforts.

Two years ago, Congress passed the Craft Beverage Modernization and Tax Reform Act. It was part of the 2017 Tax Cut and Jobs Act. It cut in half the federal excise tax most of the nation’s 8,000 breweries pay on the beer they make.

But here’s the thing. The Joint Committee on Taxation found that the tax break mostly benefits large producers and importers of spirits, wine and beer — think megacompanies.

This week, Congress approved a one-year extension of the tax cut. Local breweries will save money, but not as much as you may think.

Phoenix Beer Co. officially opened in October and plans to produce about 4,500 barrels of beer a year. That’s well over a million pints.

"We offer 12 different beers most of them offered here in our tap room, about four or five of them are out in the general market and Phoenix Tucson in Flagstaff,” said Adam Wojcik, brewery director at Phoenix Beer Co. “Our flagship is our IPA, so that's what we're known for and hope to be more known for moving forward.”

You can enjoy an IPA in the taproom/brewery/warehouse on Washington and 30th streets. And come February, you’ll find Phoenix Beer Co. at Sky Harbor Airport.

“So that's a big volume push for us,” Wojcik said. “With that being said, needing equipment is part of that.”

And that’s where the federal excise tax comes in. It’s not a sales tax, it’s a so-called “sin tax” that the federal government charges on things like cigarettes and alcohol.  Brewers who produced smaller amounts of beer were taxed seven-dollars a barrel. But, Congress slashed that tax in half two years ago.

“It was set as temporary to see if, you know, the economic impact was a positive thing,” said Rob Fullmer, executive director of the Arizona Craft Brewers Guild. “And I think what we've demonstrated that.”

In fact, Arizona has added 22 breweries in just the past two years alone. And without an extension of the tax break, they and the dozens of other local breweries would have seen their excise tax bill double. Phoenix Beer Co.’s estimated taxes would jump from $16,000 to $32,000 next year.

“Given the growth mode that we're currently in, we just did our annual business plan, right? And a lot of that is, it's all the financial side of it of how many barrels we’re going to produce? How many bodies are required to do that?” said Phoenix Beer Co.’s Adam Wojcik. “And this is kind of putting a little bit of a roadblock in front of us of, you know, how we're going to pay for these people now that are taxes from a federal standpoint are essentially- are literally doubled.”

Wojcik says the excise tax is due as soon as the beer is brewed, not sold, so it’s more difficult to pass the cost increase on to consumers. Meaning, breweries must make up the money elsewhere. But hold on.

“So I think there is some confusion from average beer drinkers about what these excise taxes mean,” Kate Bernot said. “And that’s understandable. Who the heck follows the ins and outs of tax structure and any kind of industry that they don't work in?”

Bernot is a certified beer judge who happens to be a reporter for Good Beer Hunting, a blog that extensively covers the craft beer industry. Her latest article is titled: “The Sky Isn't Falling — Despite Trade Groups' Dire Prediction, Failure To Renew Brewery Tax Breaks Won't 'Unravel' U.S Business.”

“What I set out to do in my reporting is figure out an increase in these excise taxes — which would have happened if Congress failed to extend the excise tax cuts — I set to find out what that really meant for the average small brewery,” said Bernot.

What she found is that a median size craft brewery only produces about 600 barrels of beer a year, which amounts to $2,100 in excise tax. If the tax break isn’t extended, that amount would double to $4,200 a year. It’s not chump change, but ...

“For a lot of small breweries, it's not to say that the tax increases wouldn't be noticeable or wouldn't really put a pinch in certain plans,” Bernot said. “But they probably wouldn't sink an otherwise healthy craft brewery.”

Bernot says the extension of the tax cut now allows the industry to focus its attention on a different threat. It’s losing market share to wine and liquor.  And the beer industry faces a more ominous threat — the growth in popularity of legal cannabis.