Republic Media Critic: It's Important To Watch 'All The President's Men' 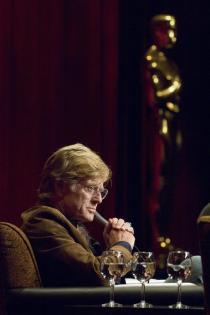 oscars.org
Robert Redford starred in "All the President's Men."

LAUREN GILGER: So, Steve, I don't know if you noticed, but we are in the middle of an impeachment right now. The president.

STEVE GOLDSTEIN: You mean the thing that's preempting some shows, that one.

GILGER: Just a few. And I know there's a lot going on with these hearings and witnesses, etc. So I'm hoping one day they'll just make a movie about it, kind of like "All the President's Men" for the Nixon impeachment. And then I will understand everything that has happened.

GOLDSTEIN: Yes. Well, Bill Goodykoontz, media critic at the Arizona Republic, kind of had the same idea. He suggested in a piece recently people should be watching that 1976 classic in light of the Trump impeachment hearings. But not for the politics, for the reporting.

BILL GOODYKOONTZ: Media has really had the times, sort of the nature of their coverage in a lot of different ways. But here we are up against this genuinely historic moment, and it has to be covered. And I think that that sometimes is not pretty. Good reporting can be a messy business. It can be boring. There are a lot of dead ends that can go down and more than any movie that I've ever seen, I think that "All the President's Men" really get the grunt work and in that sort of boring stuff you have to do.

GILGER: So as a refresher, "All the President's Men" follows around two Washington Post reporters played by, of course, my favorite, Robert Redford and Dustin Hoffman, that end up uncovering the Watergate scandal that led to President  Nixon's impeachment.

GOLDSTEIN: The Oscar-nominated movie was based on a book by Carl Bernstein and Bob Woodward, the two reporters. And even though it serves as a good depiction of what they went through, Goodykoontz doesn't want to remind people, it's — he wants to remind people, rather, — it's not all secret meetings and paid-off sources.

GOODYKOONTZ: It is a fictionalized movie. And no, it's not a documentary. And they take license with a lot of things. You're making a movie. You have to do something to make people watch it for two hours. I mean they're not going to sit there and watch people type.

GILGER: Well, I certainly love that movie, Steve. It is one of my favorites of all time, but I haven't gone back and rewatched it. In light of all this, it might be interesting.

GOLDSTEIN: Yeah, I haven't I haven't seen in a very long time either. It's just amazing to see how even how movies and reporting have changed since the 1970s. Maybe not so much but in other ways a tremendous amount.

GOLDSTEIN: Is that something that they they try to teach at the Cronkite school? Is that sort of thing comes up there?

GILGER: Most definitely. And one of my professors at the Cronkite school was one of the editors of Watergate, Len Downie, who was at the Washington Post for a very long time. And he told some pretty interesting stories about being there when all of this was unraveling at the Washington Post.