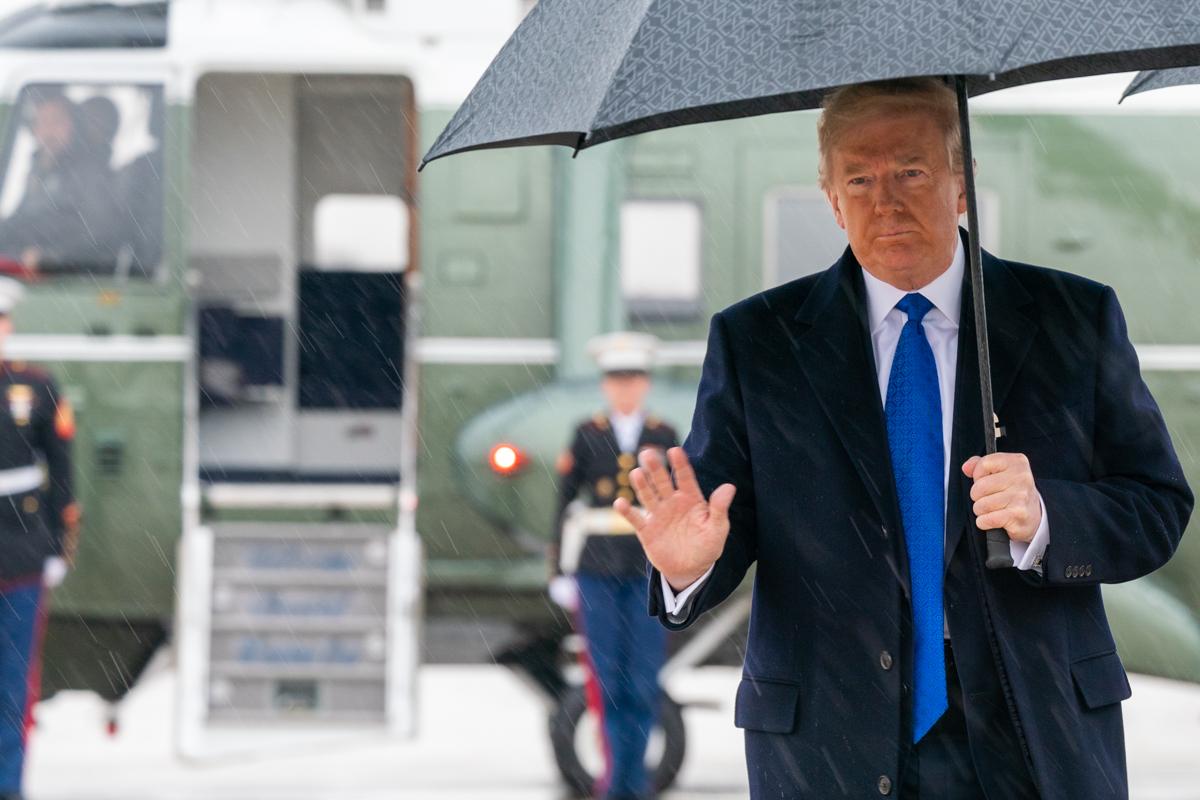 Shealah Craighead/White House
President Donald J. Trump walks to board Air Force One on his way to the NATO leaders' summit in London.

LAUREN GILGER: This morning, the House Judiciary Committee approved two articles of impeachment against President Donald Trump. This comes after an unexpected delay of the vote last night after more than 13 hours of debate. This makes President Trump the fourth president in American history to face impeachment by the House, which is expected to vote on it next week. And here to tell us more about what's happening now is John Bresnahan, congressional bureau chief at Politico. Good morning, John.

GILGER: Can you begin with just what took place in the committee today? Was it just a vote? Was there any discussion?

BRESNAHAN: There was a short period of discussion. As you mentioned in your lead in, here had been a long, a very long hearing yesterday that was very contentious. And there was a lot of back and forth today that, you know, it was over pretty quickly. They had a straight party line vote on both articles of impeachment. It was was 23-17. There's 23 Democrats who were present today to vote. Seventeen Republicans. And then now this will go — actually it goes to the House Rules Committee. It's a little technical step. And then it is scheduled to be on the floor next Wednesday at this point.

GILGER: And there was some controversy, I understand, over the delay of the vote until this morning. What was the calculus there?

BRESNAHAN: Well, Republicans were furious that the House Judiciary Committee chairman, Jerry Nadler, postponed the vote last night. There had been kind of a kind of a handshake agreement that they would that they would wrap up by 5 p.m. yesterday, but Republicans kept pushing it. And then by 11 p.m., Chairman Nadler ... wanted to stop. And he just said, you know, "We're going to stop, and we're going to hold this vote over for the next morning." And Doug Collins, the Georgia Republican who's the top Republican on the committee, was absolutely furious. They thought that Nadler had broken the rules to do this. But again, the Democrats were saying, "Look, we thought this was going to end hours ago. Republicans are just pressing these these amendments. They know they're going to fail. They're just repeating the same arguments over and over again. They just want this to ... look like a late-night vote. In a late-night vote we impeach the president." So there was an optics issue. In the end, of course, it didn't really matter. They were going to vote last night to impeach him, or they were going to vote this morning. So in the end, it had no real impact. But this is the part of the whole Republican complaint about the process, from the very first hearings in the Intelligence Committee going on to yesterday. This is they've just complained over and over again about the process.

MARK BRODIE: John, in all the hours of debate yesterday and the day before, were there any new arguments on either side for why the president should or should not be impeached?

BRESNAHAN: No, not really anything new. I mean, what they are trying to do is Republicans are trying to say that the president did nothing wrong and that there was an aid stoppage, but the Ukrainians were we're not aware of it, and that the president was really concerned about corruption in Ukraine. ... Initially, we thought maybe Republicans would say, "Well, this was you know, not everything Trump did was great, but it's not impeachable." But they've tried to take it like Trump has done nothing wrong at all. And that this was completely justifiable. And they've kind of moved that argument into that vein is that what he did was completely good and proper. And he was really concerned about corruption in Ukraine. That was why he did it instead. It's not, as the Democrats claim, and it is the transcript of the July 25 called greeting President Zelensky mentions that ... that Trump wasn't trying to manipulate the Ukrainians into investigating the Bidens. He was trying to get them to investigate corruption, and in Ukraine has this reputation for corruption. It is a longstanding problem with its institutions. So it wasn't anything new. This was just ... a rehash of of the of the fights that we've had for the last couple of months. But it was extraordinary in the tone of the meeting. I mean, he got really bitter. At one point, Matt Gaetz from Florida, a Republican, was talking about Hunter Biden's allegations that he has a drug problem. And then Hank Johnson, a Democrat from Georgia, brought up that Congressman Gates had actually been arrested for DUI. I mean, it got got pretty nasty. And ... it's gonna be more of the same when it heads to the House floor.

GILGER: Yeah. All right. That is John Bresnahan, congressional bureau chief at Politico, filling us in on all the happenings in Washington. John, thank you so much.