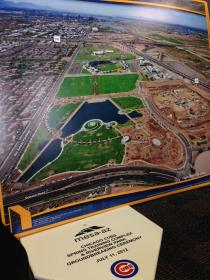 The Chicago Cubs will be coming to Mesa for spring training for the next 30 years. The new stadium will open in January of next year. Riverview Park will open its doors to the public on January 25, 2013.

The park will include a new stadium and a surrounding area with shops and restaurants. It will be called Wrigleyville West. Mesa Mayor Scott Smith said the park will be more than just a stadium.

Mayor Smith said he estimates more than 50,000 cubs fans will travel to Mesa for spring training. The City of Mesa committed $84 million to the complex, and the Cubs organization will pay for anything more than that amount.