'We Are Ashamed': National Organization For Women Holds Rally For Migrant Detainees In Phoenix 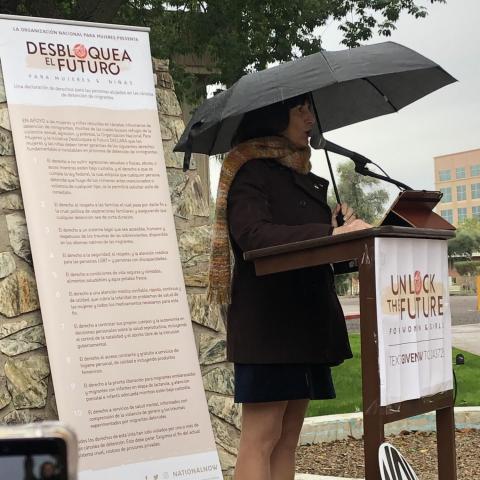 Scott Bourque/KJZZ
President of the National Organization For Women (NOW) Toni Van Pelt addresses an audience during a rally at the state Capitol Dec. 8, 2019.

Activists from the National Organization for Women (NOW) gathered at the state Capitol to protest what they call inhumane conditions for women and girls held in migrant detention centers in Arizona.

According to NOW’s President Toni Van Pelt, more than 10% of all migrants held in the custody of Immigration and Customs Enforcement (ICE) are kept in facilities in Arizona. Many of these detainees are women and girls, who, Van Pelt argues, are more likely to be victims of abuse at the hands of ICE and Border Patrol officials. 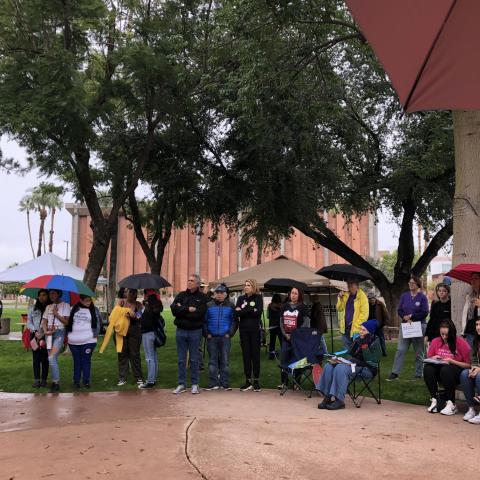 Scott Bourque/KJZZ
An audience gathers during a rally for the National Organization of Women (NOW) at the state Capitol Dec. 8, 2019.

“Women and girls in detention are especially at risk,” Van Pelt said.

Van Pelt and other NOW leadership toured an ICE detention center in Eloy, and reported conditions in violation of both federal and international human rights standards. They accused the Trump administration of routine and pervasive violations of human rights, and argued it will be something Americans will have to apologize for in the future.

Both Van Pelt and Arizona State Sen. Victoria Steele (D-Tucson) brought up the fact that underage girls in migrant detention centers were subjected to having their menstrual cycles and pregnancies monitored by the agents detaining them.

“Their periods are being tracked by creepy government officials,” Van Pelt said.

In 2018, the Trump administration ordered ICE and Border Patrol agents working in detention centers to track the pregnancy and menstrual cycles of detained girls, aged 12 to 17.

“Why would he care about a 13-year-old girl’s menstrual cycle,” Steele asked the crowd at the rally.

According to a lawsuit filed by the American Civil Liberties Union, Scott Lloyd, the former head of the Office of Refugee Resettlement and pro-life activist, tracked the cycles to prevent migrant girls from accessing abortions – which they are entitled to under the law.

“He was an activist against women accessing their legally guaranteed constitutional right,” Steele said. “Many of these girls were pregnant as a result of rape ... but Scott Lloyd blocked the door and prevented any girl who came into the refugee resettlement agency from getting an abortion.” 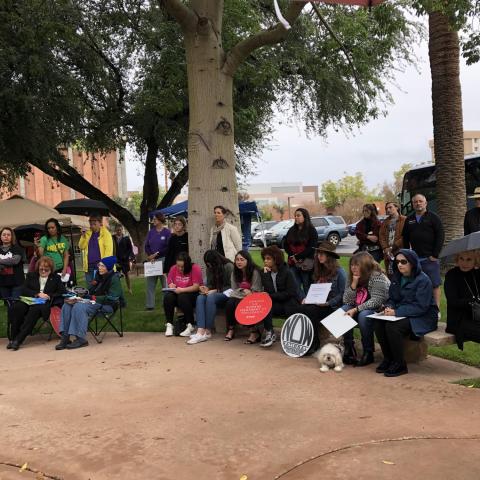 Scott Bourque/KJZZ
An audience gathers during a rally for the National Organization of Women (NOW) at the state Capitol Dec. 8, 2019.

A judge ruled that the government could not block detained girls from accessing abortions and reproductive health care, and ordered Lloyd to stop tracking pregnancies and menstrual cycles.

“We don’t know if he is still doing that today, because his agency is refusing any comment to any journalist that has the courage to stand up and ask,” Steele said. “This is just wrong.”

NOW activists are arguing that the conditions migrants are held in while in ICE custody are inhumane and traumatic to young children and families held in the facilities, and that the consequences of this trauma will be felt for generations.

“I think we need to continue training mental health providers in the reasons why these families come to the us and the deeply troubled political background they are running away from,” she said. “It has to be taken into consideration when we create treatment plans for them.”

Suzanne Hug’s family was held in a Japanese-American internment camp during World War 2. She spoke at the NOW rally because she wants people to understand how the consequences of these actions are felt for generations.

“The way that the White House talks about these people as being dangerous really strikes home with me,” she said. “Japanese Americans were U.S.-born citizens with businesses and families, and suddenly one day, the enemy.”

Her father, who was born in an internment camp in Idaho, struggled for years. She witnessed his struggle. “Even though I was not interned, there is multi-generational trauma,” she said.

Eventually the American government apologized for the internment of Japanese-Americans during the war.

“I see the exact same actions happening that we as an American people are going to have to apologize for again,” Hug said. “And I’d much rather stop it now before it affects thousands and thousands of children, and their children, and really our community, and our national fabric as a whole for generations.”

'White People Were Free In 24 Hours'

Alejandra Pablos has been in deportation proceedings since 2011. She was charged with possession of drug paraphernalia and driving under the influence. U.S. citizens charged with those offenses often serve next to no jail time - but she’s still dealing with the fallout as a non-citizen. 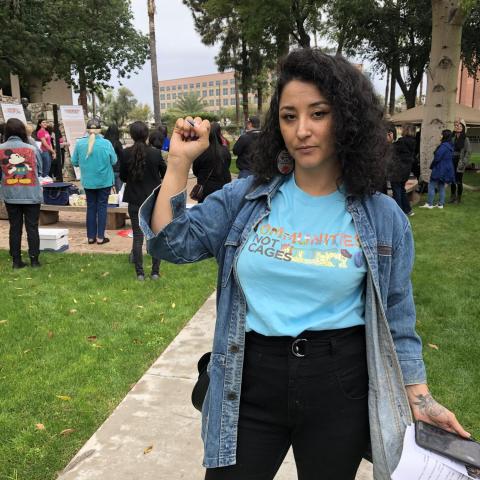 Scott Bourque/KJZZ
Alejandra Pablos, an immigration activist, spoke at the National Organization for Women rally at the state Capitol on Dec. 8, 2019. Pablos has been subject to deportation proceedings for 12 years due to DUI and drug paraphernalia charges.

“Other people just do 24 hours, just do probation,” she said. “For me, probation just wasn’t enough. I did four years of probation, two years at a detention center, I did my time at a county jail and state prison, and 12 years later, I’m still being targeted. Still deemed disposable.”

Her two years in ICE custody turned her into an activist, she said.

“I became very politicized,” she said. “I became an abolitionist, a student of abolition.”

Pablos calls for the decriminalization of migration and changing laws that call for mandatory deportation for certain offenses – laws where citizens might face probation, but immigrants face deportation.

“Laws are criminalizing us,” she said. “My drug charges made me mandatory detention and mandatory deportation, which is hard to fight. I can’t prove that I rehabilitated, that I transformed, I’ve done all these things.”

The Detainee’s Bill Of Rights

NOW is advocating for a universal bill of rights for people detained in migrant detention centers.

It calls for protections against sexual violence while in custody, an end to family separations, accessible legal representation and native-language interpreters, as well as basic human rights like medical care, safe food, and access to hygeine products and reproductive rights.

“Why is this going on in our country,” Van Pelt asked. “We are ashamed of ICE, of Customs and Border Protection, and members of this Administration. We are ashamed of the government of our country. NOW demands these women be treated according to basic human rights.”