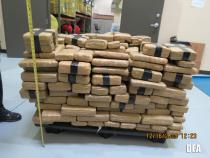 PHOENIX – Eleven people suspected of bringing thousands of pounds of marijuana across the border into Arizona and New Mexico are now in federal custody. The arrests are the result of a year-long investigation by various federal agencies.

The Drug Enforcement Administration alleges the individuals were part of a drug trafficking organization responsible for bringing as much as 27,000 pounds of marijuana into Arizona and New Mexico in the past year.

Most of the drugs came through the Agua Prieta area, said DEA spokeswoman Ramona Sanchez.

"This detail was well organized," Sanchez said. "They used multiple load drivers and multiple vehicles, they used backpackers to facilitate the drug transportation operations in the remote desert of Cochise County near cities like San Simon and Wilcox for further delivery into Tucson and Phoenix."

The DEA alleges the group is linked to the Mexican Sinaloa cartel.