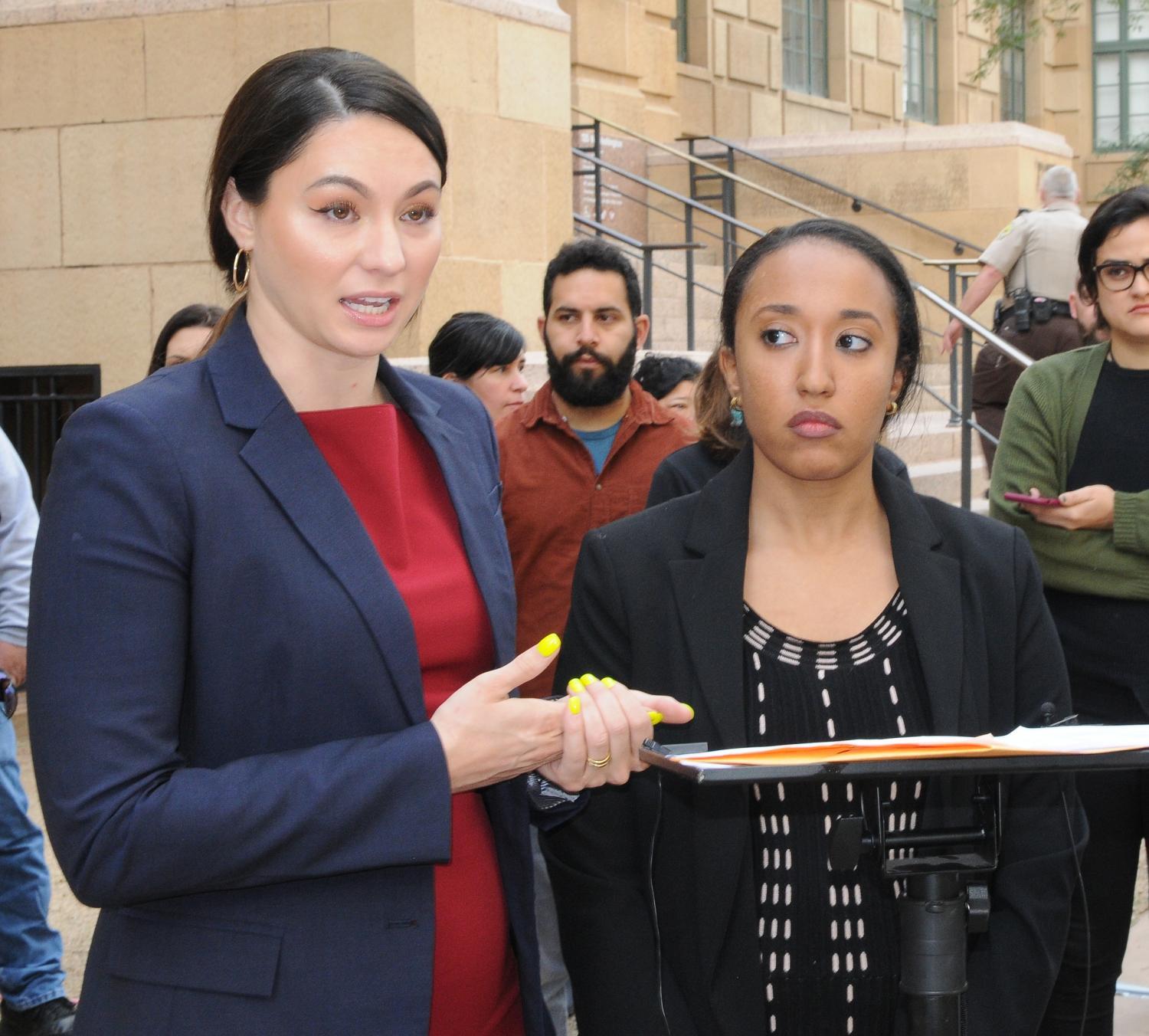 Conservative lawmakers gathering in Arizona Wednesday for a conference of the American Legislative Exchange Council were greeted with protests and a lawsuit.

The council, known as ALEC, has faced growing scrutiny over the model legislation shared at its conferences, which critics say provides corporations and special interest groups a chance to exert influence on state laws.

A group of left-leaning organizations filed a lawsuit Wednesday in Maricopa County Superior Court alleging that Arizona lawmakers participating in the conference are violating an Arizona law that requires deliberations on legislation be conducted in public.

“This secretive process is not conducive to public understanding or basic political accountability,” lawyers for the groups wrote in the lawsuit.

A spokesman for the Republican-controlled House of Representatives, Matt Specht, said officials would review the lawsuit. He did not immediately comment.

ALEC develops model bills that its member lawmakers can introduce in their own state capitols. Critics say the process allows lobbyists for companies or special interest groups to quietly get state legislatures to adopt laws friendly to their interests.

ALEC says its conferences allow lawmakers and industry experts to discuss business and economic issues, share ideas and come up with policies that can advance the principles of limited government, free markets and federalism. It posts the model legislation that it formally adopts on its website.

“We bring people together to talk about ideas, to talk about their own lived experiences and what worked and didn't work in states,” said Bill Meierling, executive vice president of the organization. “And then other legislators learn from that and say, ‘I don’t want to repeat your mistake.’”

Meanwhile, dozens of activists affiliated with left-leaning groups protested the start of the conference at a Scottsdale hotel. They say the conference promotes legislation that seeks to weaken unions, promote charter schools, cut taxes and block efforts to combat climate change.

Waving signs and chanting along the busy road in front of the hotel, demonstrators said they hope to spread the message about ALEC's efforts to promote a conservative agenda.

“If people knew who ALEC really was, they would be outraged,” said Sandra Castro Solis, a co-founder of Puente, an immigrant advocacy group in Phoenix. “Corporations would not be part of ALEC if they didn't have specific investments and they weren't profiting off of the criminalization of our communities and the privatization of our education system.”

ALEC's school choice advocacy encourages “underfunding, starving the public schools so there's no more public education,” said Kelley Fisher, a kindergarten teacher from Sun City who protested with others from the “Red for Ed” movement, which led a teacher walkout movement that secured higher wages for educators.

Republican Gov. Doug Ducey plans to speak at the conference on Friday.

An investigation published earlier this year by USA Today, The Arizona Republic and the Center for Public Integrity found that more than 10,000 bills introduced nationwide were copied almost entirely from proposals written by special interests. More than 2,100 model bills had been signed into law over eight years, the news organizations found.

KJZZ's Ben Giles joined The Show to talk about this issue.