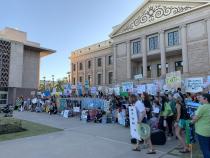 United Nations leaders are gathered in Spain this week for climate change talks. Here in Arizona, youth climate strikes are planned for Dec. 6.

This marks the third time this year Arizona students will demonstrate for climate action. Young people gathered at the state Capitol in March and September.

But this time, rather than focusing on state lawmakers, students are spreading out to target city governments.

“We’re really hoping to pressure our local elected officials, our city council members, our school board members and other governing bodies like that to take action on the climate crisis in whatever manner is in their jurisdiction," said 18-year-old Brian Mecinas, advocacy director with Arizona Youth Climate Strike.