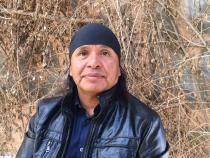 Wendsler Nosie Sr. said the U.S. government won’t protect his holy land, so he’ll have to.

Nosie Sr. is the former chairman of the San Carlos Apache Tribe and a leader of the protest movement against a planned copper mine in the Tonto National Forest. On Thursday, he begins walking west to Chich’il Bildagoteel, Oak Flat from his tribe’s reservation.

“The dream was to go home [where] we originated from, where we came from. Our ancestral homeland,” he said. “I’m going home.”

Nosie’s walk is about 44 miles. Once he arrives on Saturday, he intends to stay in Chich’il Bildagoteel, Oak Flat.

Resolution Copper plans one of the largest and deepest mines in the country there once it secures a land transfer with the U.S. Forest Service. A draft Environmental Impact Statement (EIS) for the mine said there was a “very high potential” the project would adversely impact sites valuable to tribes.

Nosie Sr. delivered a letter to the Forest Service last week to inform them of his plan.

“To let them know that, you know, I’m leaving the reservation and I’m going back to my inherent right, my birthright, my indigenous right,” he said. “To go back to Oak Flat to take care of the place because the United States failed.”

Dan Blondeau, senior adviser of communications with Resolution Copper, said the company “respects the history, beliefs, and culture of our neighbors and local communities. We recognize that all tribes have traditional connections to the land.”

The federal law that allowed for the land transfer also ordered the creation of the Apache Leap Special Management Area. Last year, Resolution Copper, 12 tribes, and the Forest Service settled on a land swap to protect the site where, in the late 1800s, Apache warriors jumped to their deaths rather than be killed by white settlers.

The fight against the planned mine at Oak Flat has been going on for years but is now facing an inflection point, with the release of the draft EIS in August and the close of the public comment period earlier this month. The land exchange with the Forest Service will come no more than 60 days after the final EIS is released, which is expected in the fall of 2020.

The supervisor of the Tonto National Forest, Neil Bosworth, told the Phoenix New Times that due to federal laws and regulations, he is unable to reject the land transfer or the mine.

EDITOR'S NOTE: The headline has been updated to better reflect Wendsler Nosie Sr.'s former position with the tribe.