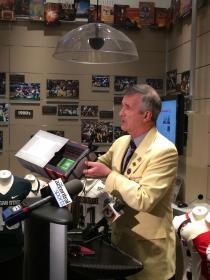 (Photo via @FiestaBowl)
Robert Shelton shows off the Arizona 2016 Bid Box at a press conference following the announcement.

The management committee for the new College Football Playoff system has picked University of Phoenix Stadium for its 2016 national championship game. Glendale was chosen over Jacksonville, New Orleans and Tampa Bay. That city will host 2017’s game.

Fiesta Bowl director Robert Shelton led the committee that put together Arizona’s bid for the game. He said that group got a lot of help not just from the mayor of Glendale, the host city, but also the mayors of Phoenix, Scottsdale, Mesa and Tempe.

"The mayors really were critical in helping us, not only through their own offices but also through the convention and visitor bureaus they work with. That was important in securing sites for pregame events [and] the necessary hotel rooms," said Shelton.

The College Football Playoff system will replace the current Bowl Championship Series starting with the 2014-2015 season.