Q&AZ: What's The Deal With Those Letters On Arizona Mountains? 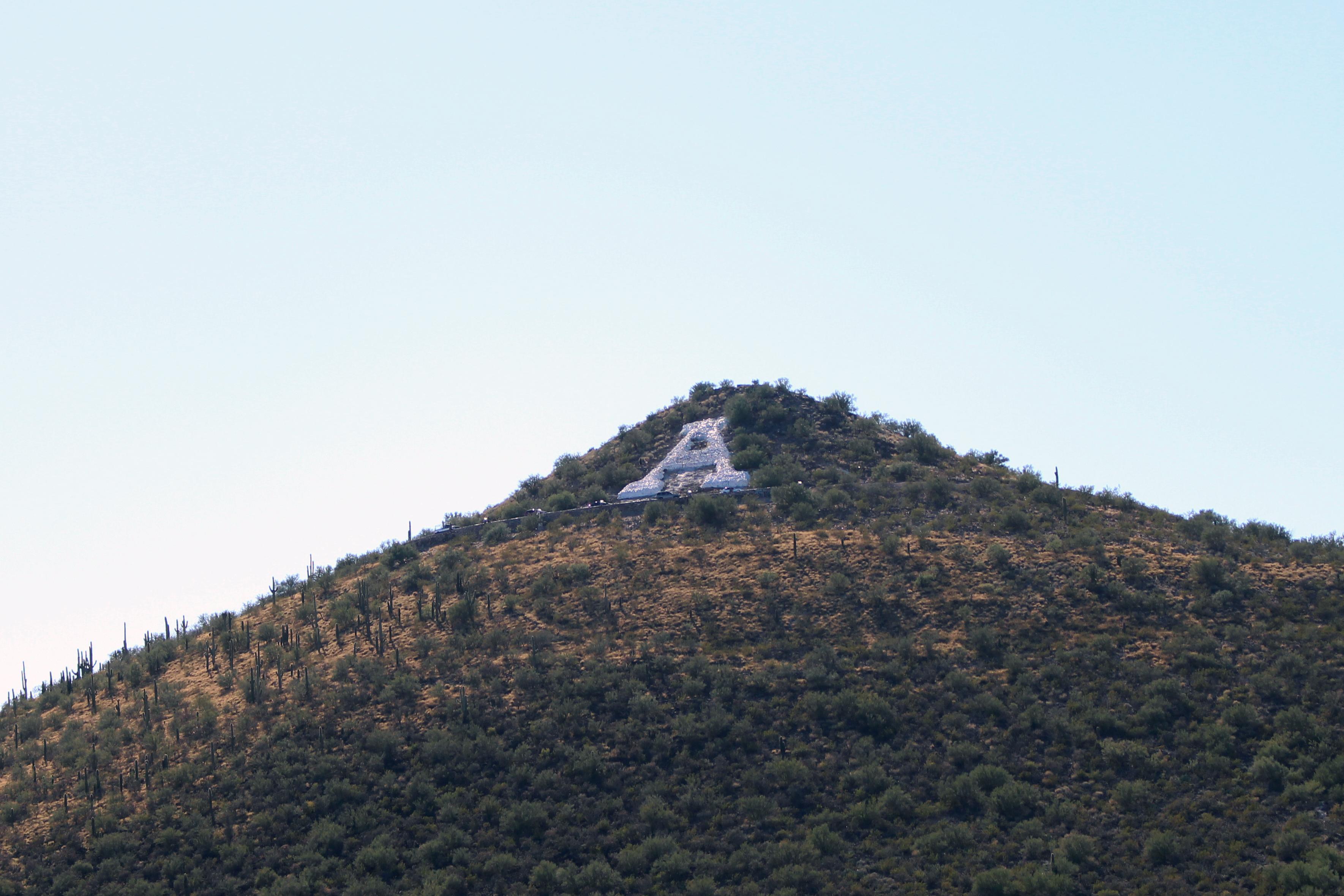 Justin Stabley/KJZZ
The "A" on Sentinel Peak in Tucson.

They adorn hills, mountains and buttes across Arizona. But what’s the deal with those big, white letters on peaks in dozens of Arizona cities and towns? Through KJZZ's Q&AZ reporting project, a listener asked where the custom came from.

The 2,897-foot mountain a few miles west of the University of Arizona is officially known as Sentinel Peak.

But to many Tucson residents — particularly students and graduates of the university — it’s simply “A” Mountain.

The moniker dates back more than a century, to a time when the university’s football team was bad.

That changed that year on Thanksgiving Day, when the young team known as the Wildcats faced off against Pomona College in California.

“The team, the University of Arizona won, by 6-7, they won this game,” said Oro Valley author Evelyn Corning. “And they were so excited because they won! Not just this year, but for years they hadn’t won, so this was like — this was major,” 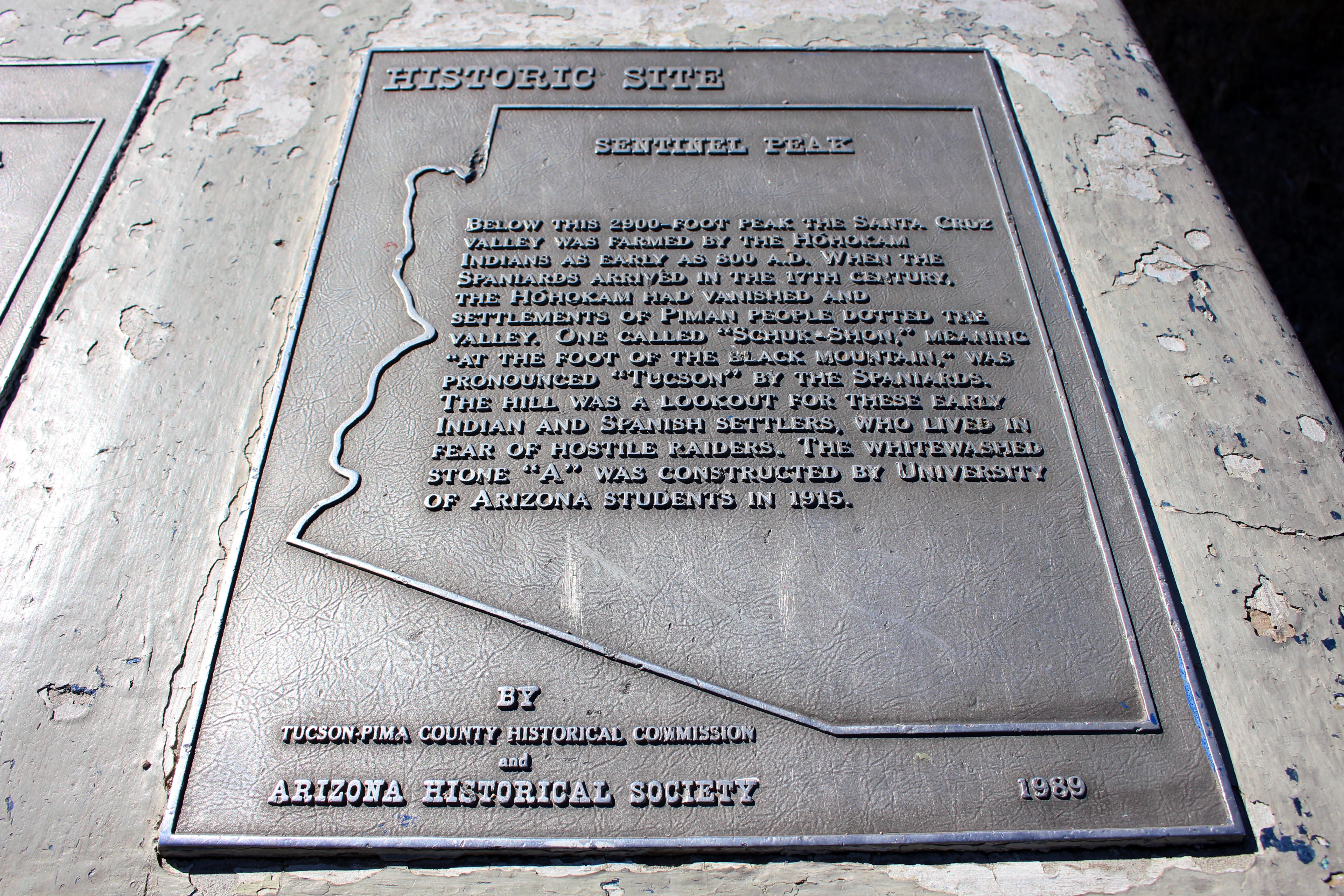 That was the game that “put the Greater Arizona on the map,” according to the Desert, the University of Arizona’s yearbook.

The yearbook’s authors later added that the game was no less than “the biggest thing that ever happened” – understandable since it was their first win, ever.

“It was huge for Tucson and huge for the students,” said Erika Castaño, an archivist at the university. “And there were articles written in the paper here and in LA for days … and with this, the idea of the A was born.”

Construction of the 70-foot by 160-foot “A” on the mountain overlooking town was schemed up as a way to celebrate the win, a show of pride in the school’s triumph.

It took nearly two years, Corning wrote in her book, “Hillside Letters A to Z,” but in 1916, students had finished hauling basalt rock up Sentinel Peak and whitewashing the massive letter.

It was the first of its kind in Arizona, but by building the “A,” University of Arizona students were imitating something they’d seen at Pomona College – a giant “P” cut into the side of the San Gabriel Mountains near the campus.

The letter at Pomona was one of several built near colleges or universities in California and the western United States in the early 1900s, according to the late James Parsons, a geologist at the University of California Berkeley. 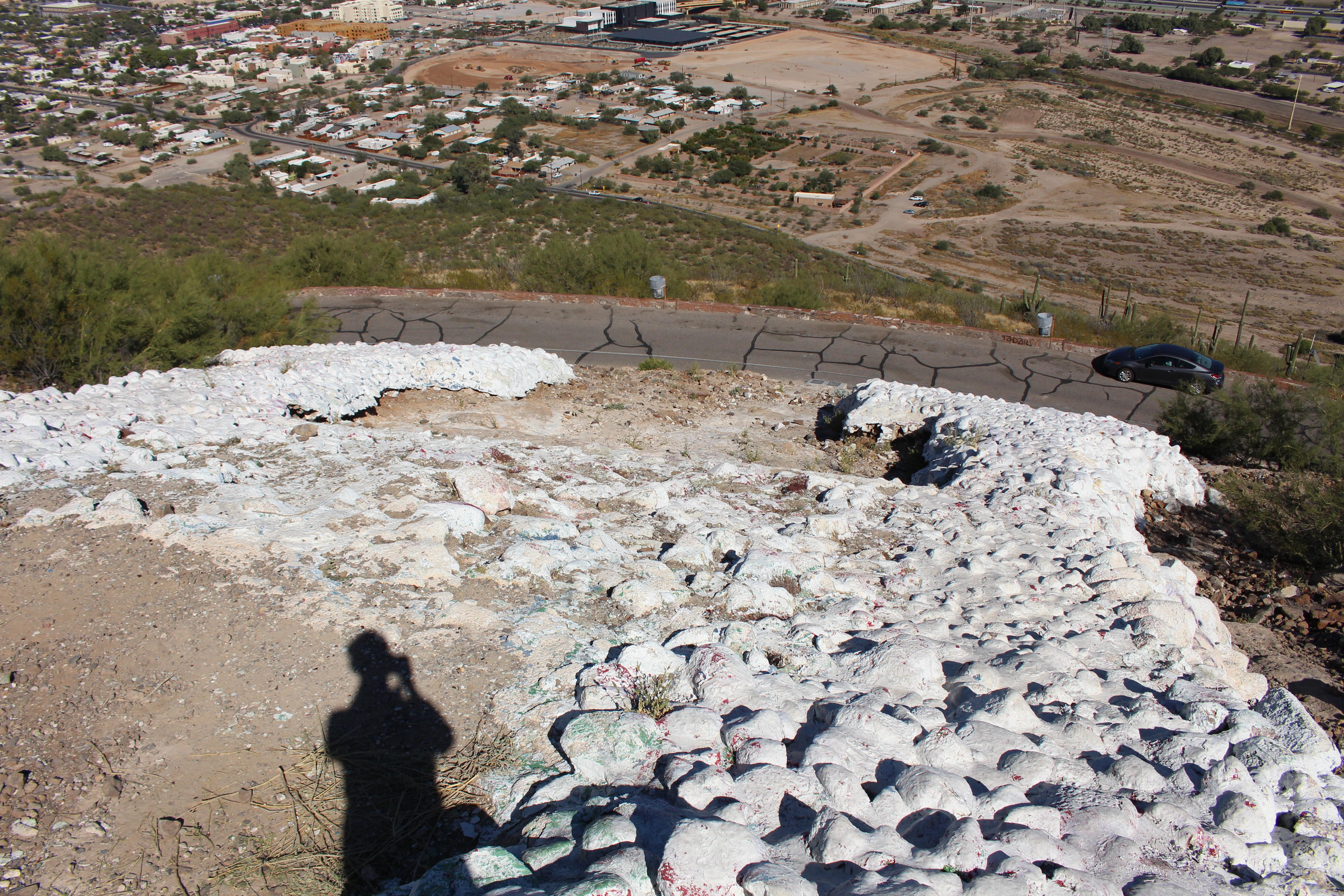 Parsons’ figurative backyard at UC Berkeley was the site of the first such letter, a “C” built by freshmen and sophomores in 1905.

The letter marked a truce between those warring classes. It was tradition for freshmen and sophomores to engage in something like a violent version of the game King of the Hill. In a 1988 article for Landscaping Magazine, Parsons wrote that the students played the game in a manner akin to “guerrilla warfare.”

“Rivalry wasn’t so much from college to college, but rather from freshman and sophomore class,” Corning said. “So, whatever was their graduating year, that was how they were known, the class of ‘07 and the class of ‘06.”

Under threat from university and state leaders who viewed the violent tradition as a black eye for the school, construction of the “C” proved to be an agreeable alternative for students.

“That seemed to click, for the honor of their college,” Corning said. “That it wouldn’t be about what class, but rather their university.”

Dozens of schools would quickly follow suit, including the University of Arizona a decade letter.

Tempe, too, built its own letter on a mountain in 1918, according to Corning’s research – a “petite 36-by-36-foot letter “N” in honor of the Tempe Normal School of Arizona, she wrote.

Over the years, the “N” was enlarged, changed to a “T” when the school changed its name to Tempe State Teachers College, and eventually an “A.”

That didn’t sit well with University of Arizona students, who apparently took dynamite to Tempe’s “A” in the 1950s.

As a tamer form of protest, the student bodies in Tempe and Tucson have a tradition of trying to paint the opposing school’s “A” with their own university’s colors.

The week before ASU and University of Arizona play for the Territorial Cup, some ASU students are so committed to defending Tempe’s “A” that they camp on Hayden Butte to protect it from the school down south.

“It’s got a lot of meaning for ASU students and alums. It hasn’t been painted the last five or six years, I believe, which is great, but when that does get painted, I mean, it’s definitely an eyesore,” said Doug Owczarczak, director of student services for ASU’s Alumni’s Association.

As a 2009 graduate, Owczarczak was one of the countless students who’ve helped paint the A white during the first weeks of their freshman year.

“It was kind of like your rite of passage,” he said. “You get to leave your mark on this icon that you can see almost anywhere in the Valley south of the university.”

The letter trend extends beyond the state’s flagship universities to many high schools, from Miami to Maricopa. Others overlook towns, like the “Q” in Quartzsite or “J” in Jerome.

Corning estimates there are more than 500 such letters across the western United States.