Sheriff Arpaio's Chief Deputy: We Did Not Investigate Judge’s Wife 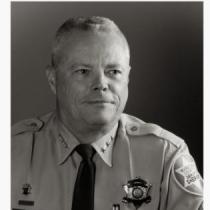 In the ongoing contempt of court case against Maricopa County Sheriff Joe Arpaio and his staff, the sheriff’s second-in-command answered more questions Friday about possible investigations into the federal judge in the case, or his relatives.

The courtroom was stunned on Thursday when U.S. District Court Judge Murray Snow unexpectedly asked Arpaio if he was aware of any investigations relating to Snow or his family. Even more surprising was that Arpaio admitted there were in fact two separate inquiries with connections to Snow, including one relating to comments allegedly made by Snow’s wife.

He said the sheriff received a Facebook message from a woman named Karen Grissom who said she is a personal acquaintance of Snow’s wife. Sheridan testified that Grissom had run into Snow’s wife at a restaurant and heard her say that Snow disliked the sheriff and wanted him out of office.

Sheridan testified the sheriff’s lawyer at the time, Tim Casey, hired a private investigator to talk with Grissom and her family about what they heard.

"No one ever went further then verifying that conversation," Sheridan said.

Arpaio’s criminal defense attorney Mel McDonald said there was nothing sinister about it.

“It wasn’t that the sheriff is out trying to go after the judge’s wife,” McDonald said. “It isn’t that at all, he didn’t initiate it.”

McDonald, who himself is a former Superior Court judge, said if there are reports of a judge making statements about a pending case showing an actual bias, the attorney in the case should follow up.

McDonald said in this instance, the inquiry ended there.

“Tim Casey was not involved in any investigation of Judge Snow or his family,” Clark said. "He stands by that statement 100 percent."

When asked how Casey was defining the word "investigation," Clark said, “Well that is an issue isn’t it? And that is going to be for the court to decide.”

Clark said attorney-client privilage forbade Casey from commenting on Sheridan and Arpaio’s testimony that he had hired an investigator to speak with the Grissoms.

The judge told the sheriff to turn over documents related to this inquiry as well as a second investigation that may also have links to Snow.

In 2013, Snow ruled against the sheriff’s office in a landmark racial profiling case. When information surfaced that the sheriff’s office had repeatedly violated his orders, Snow set a four-day evidentiary hearing to find out if Arpaio, Sheridan and three others had committed civil contempt of court.

The judge is not expected to rule on the contempt issue until after additional proceedings in June.