Did You Know: Monument Hill Is An Important Arizona Spot 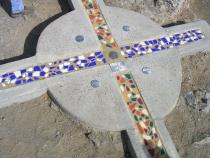 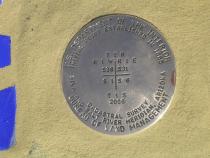 (Photo courtesy of Brian Fisher)
The cap identifying the meridian on Monument Hill.

You may have walked around the wetlands in the West Valley. The area is surrounded by birds, petroglyphs and a hiking spot, but there is more to this place than meets the eye. The hill in the area overlooking the Valley has so much historical and legal significance.

In Avondale you have an international raceway and where you get a bird’s eye view of that side of town. Did You Know Monument Hill is the state’s initial point for the Public Land Survey System?

“Monument Hill is the starting point for Arizona, and the name of it is the Gila and Salt River Meridian,” said Brian Fisher, an Arizona land surveyor with the Central Arizona Project.

“There’s tens of thousands of points that are measured off of that station,” Fisher added.

Monument Hill is a 150 foot slope located on 115th Avenue, just east of Phoenix International Raceway. A concrete “X” marks the spot where measurements of the state’s land initially started. This is the epicenter of all surveying for property deeds.

“For any land to be privately owned by a citizen of the United States it needs be surveyed in the Public Land Survey System in Arizona and most of the western states,” said Fisher.

Fisher said Monument Hill has been the center point for measuring the state’s land since 1851. It was identified by the federal government while canvassing the area for the United States-Mexico boundary under the Treaty of Guadalupe Hidalgo, the peace treaty that ended the Mexican-American War and made the southwestern states U.S. territories. The first 36 miles of Arizona were surveyed in 1867.

“Back in that era they were using probably a steel tape. They tried to hold it parallel to the ground, and then in the most modern sense it’s satellite survey method or GPS, global positioning system,” Fisher said.

The Valley can be clearly seen from the top of Monument Hill. To the north is Avondale, to the south is Estrella Mountain and to the east and west is a line that seems to go on without end. That is Baseline Road. Yes, you guessed it! Fisher said the road got its name for the Baseline and meridian survey that helps mark the center spot.

And here is a bit of land surveying information that may be useful for this holiday season. I was told that if you travel  115th Avenue straight north you would end up at the North Pole.