Arpaio Takes The Stand In Contempt Of Court Case 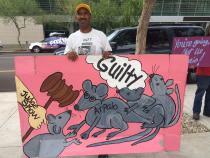 (Photo by Jude Joffe-Block - KJZZ)
Protester Rafael Guerrero held this sign outside of the federal courthouse on the first day of the contempt hearing against Sheriff Joe Arpaio.

Sheriff Joe Arpaio took the stand late Wednesday afternoon in the contempt of court hearing against him and four others. He is expected to continue answering questions about how he repeatedly violated a federal judge’s orders in a long-standing racial profiling case.

Since Arpaio and his chief deputy have already admitted violating those orders, the big question is whether they did so deliberately.

So far in the hearing, the court has heard from both a lieutenant and a sergeant who testified the sheriff personally gave them instructions that contradicted a 2011 pre-trial order issued by U.S. District Court Judge Murray Snow. That order banned the sheriff’s office from detaining immigrants solely for being in the country illegally in violation of federal immigration law.

On Wednesday, plaintiffs attorneys played a video clip from their deposition with Lt. Brian Jakowinicz in which he described the sheriff’s instructions for what to do if the Human Smuggling Unit apprehended unauthorized immigrants who could not be booked on state criminal charges.

The day before, Sgt. Brett Palmer testified about an incident when the now-disbanded Human Smuggling Unit apprehended a vehicle full of immigrants they suspected were in the country illegally, but not all of them could be charged with violating the state human smuggling law that was in place at the time.

In the past, deputies typically would turn such individuals over to Immigration and Customs Enforcement, but this time the federal agency refused. Palmer said the sheriff initially asked him by phone to continue holding the immigrants.

Another sergeant, Mike Trowbridge, testified the sheriff had made the request because he wanted to stage a press conference.

Palmer testified that he believed holding the immigrants longer would violate the court order so he resisted. He said he instead had the immigrants transported to a U.S. Border Patrol station in Casa Grande, though in fact, that action also violated the judge’s order.

When it was Arpaio’s turn to testify, he said he had delegated compliance to his attorneys and staff. When asked about Palmer’s story, Arpaio said, “That’s his version,” and added, “I don’t give orders to sergeants.”

The sheriff spoke in a hoarse voice and removed his glasses at times, revealing dark circles under his eyes. He wore a simple square-shaped tie clip instead of his signature gold one in the shape of a pistol.

Arpaio wasn’t always direct in his responses. Attorney Stanley Young, who questioned Arpaio for the plaintiffs, often had to point out inconsistencies in the sheriff’s answers compared to his responses in previous depositions.

“I think there were times when he had trouble either understanding or answering the questions that were asked,” Young said after court.

At one point Snow told the sheriff sternly that he had to listen closely to Young’s questions and answer them.

Young said he believes the evidence his side has presented so far shows that the sheriff willfully disobeyed Snow’s 2011 order.

“The sheriff knew about the injunction when it was issued, he was told the things he was doing were contrary to the injunction,” Young said. “People within the sheriff’s office discussed that they needed to make a change, they did not make that change, the violation of the injunction were therefore intentional.”

Arpaio said the release was written by his staff and was not a quote attributed to him.

Young also played clips of a televised interview Jorge Ramos of Univision did with Arpaio in March 2012, just months after the judge's December 2011 order.

“Are you still arresting and detaining undocumented immigrants in Arizona?” Ramos asked Arpaio.

“Yes we are,” Arpaio responded. “We just arrested 31 more recently coming into our country illegally. The majority we book into jail, we don’t turn it over to ICE.”

Arpaio went on to say he was relying on Arizona laws to arrest them, including the human smuggling law and others that criminalized working with fake IDs. Neither law is currently in effect.

Young pointed out that Arpaio had said just a majority were booked into jail on criminal charges, raising a question about the others.

The sheriff’s attorney, Michele Iafrate, has not yet questioned Arpaio but is likely to do so on Thursday. She declined to comment for this story.

Arpaio’s other main attorney, Tom Liddy, has filed a motion to withdraw from the case. He cited a conflict after the 9th U.S. Circuit Court of Appeals determined Maricopa County, not the sheriff’s office, should be the named defendant in the case.

On Wednesday, Snow said he would not immediately grant Liddy’s request in order to give Liddy time to share information with Iafrate before his departure.

Wednesday’s proceedings were postponed by two hours to give Iafrate time to prepare. The four-day hearing began Tuesday and is scheduled to go through Friday afternoon.

The judge has indicated there is a possibility a second round of this contempt hearing will be scheduled in June.

If found to be in contempt, Arpaio could face fines and could be subject to expanded oversight by the court and the court-appointed monitor. The judge has also threatened to refer the case to a federal prosecutor to pursue criminal contempt charges.