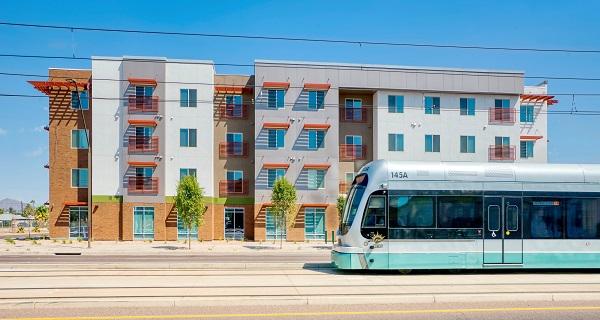 A new affordable housing community is up and running in Tempe.

The River at Eastline Village is located near McClintock Drive and Apache Boulevard in Tempe. The 56-unit building was constructed and financed with money from several government agencies.

Tempe Mayor Mark Mitchell said the location of the development will put residents near resources that will help them succeed.

“We have an elementary school a few blocks away with a city park and city recreation facility in Escalante," Mitchell said. "You couldn’t ask for a better location for any type of housing, let alone one that’s going fill the need of some of the most vulnerable in our community.”

Resident James Rodgers said it took him almost three years to sign up, get approved and finally move into the new development, but it was worth it. He says the rent is much cheaper than what he and his partner were paying before.

“And I figure if we can hold out for two years, we could accumulate and save and establish ourselves well enough to probably find a fix-er-upper as far as a house is concerned,” Rodgers said.

In addition to a new playground, the community has case management services, a resource center with internet access and a non-profit headquartered on site that focuses on helping families transition to permanent affordable homes.

At this stage, 49% of Tempe’s housing is classified as affordable.

Tempe’s Vice Mayor Lauren Kuby joined The Show to talk about Eastline and the partnership that brought it about.