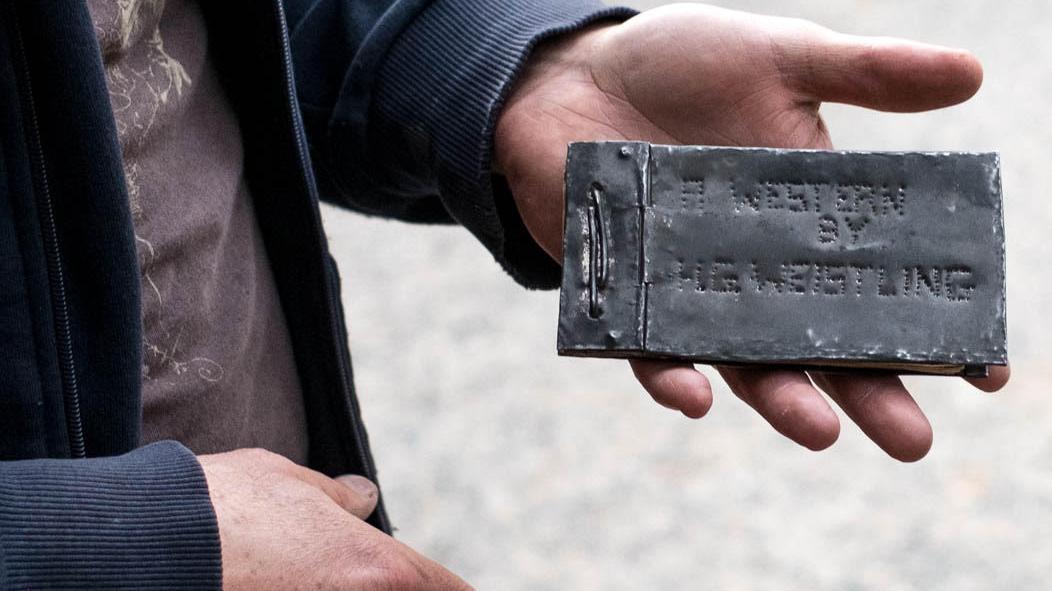 Morgan Weistling
Howard Weistling drew a comic strip on cigarette wrappers and them bound together with scrap metal while at a prisoner of war camp in Barth, Germany.

His whole life, Howard Weistling wanted to be a comic strip artist. But in December 1941, the Japanese bombed Pearl Harbor. And Weistling felt compelled to enlist. He trained to be an aircraft mechanic with the Army in Gila Bend.

"He would tell stories about putting the tools in water to keep them cool enough to handle," said Mike Weistling, Howard's grandson. "Then you'd have to dump out the water because the water would get too hot to touch."

Mike, who lives in Flagstaff, said after flight engineer training Howard was promptly shipped off to Europe.  On his maiden flight, his plane was shot down over Austria.

The entire crew of eight men landed safely in Austria. But a farmer found them and turned them over to a prisoner of war camp in Barth, Germany. Howard's son, Morgan Weistling, says it was freezing in northern Germany and the men almost starved to death.

"The only thing they were fed was the garbage of the German soldiers," Morgan Weistling said. "They would come and open the door and throw the stuff that was leftover on their plates onto the floor of the barracks."

Hungry and homesick Weistling coped the only way he knew how. He drew a comic strip. The book, cigarette wrappers bound together with scrap metal, was sent around camp.

"This was the story he would tell me all my life," Morgan said. "He'd say, 'I'd do one panel of the story. And then it would get passed around the whole camp.' And eventually it would make it back and he'd do another segment of the story and it would go around. This would go on for months. It kept the morale of everybody up because they had something to look forward to."

After an entire year of this, they woke one morning to find their guards gone. As a group, they decided to send one prisoner into town to see what had happened. That prisoner saw the Russian army and turned back and suggested they all stay together at the camp.

Many Germans had infiltrated POW camps so Russians were very suspicious of the men. Howard had the forethought to paint a small American flag on his jacket.

"That came in handy," Morgan said. "He looked German. He was German, so it was good he had that patch."

Howard finally got to go home. Just lucky to get out alive, he left the book behind.

Mike Weistling
A photo of Howard Weistling taken when he was a prisoner of war during World War II.

Back home in California, Howard soon had a wife and kids to feed, so he had to set aside his dream of becoming an artist and took a job as a gardener instead. Morgan was the youngest of three siblings. He and his older brother are 16 years apart.

"He was a different kind of a guy with me than he was with my brother and sister," Morgan said. "I think they got the father who was still fresh from the POW experience."

Morgan also shared his father's artistic gifts. Howard lived for the nights when Morgan would crawl upon his knee and he'd teach him to draw.

"He would draw some cartoons and I would copy exactly what he would do," Morgan said. "He would show me rudimentary fundamentals of drawing. I would learn as I went along. I still have all those sketchbooks."

Howard lived to see his son realize his dream of becoming a successful artist. Morgan is known as one of America's top contemporary painters today. That's how seven decades after the war a stranger in New York was able to find him online.

"I got this email out of the blue that said, 'I'm a retired businessman from New York,'" Morgan recalled. "'I think I have something that might belong to you.'"

The man said one of his business partners embezzled a lot of money from their company.

The truck contained three of Hitler's watercolor paintings, billy clubs and his father's comics with Howard's name engraved on the cover.

"How did they end up in a truck with Hitler's watercolors when he was just a lowly POW," Morgan said. "How did it end up in this truck?!"

“All I could think of was if he had been alive, this would've killed him. He would've been shocked."
— Morgan Weistling

Morgan hurried inside to tell his brother who happened to be visiting.

“‘You’re not going to believe the email I just got,’” Morgan told his brother. “We just both sobbed. We’re going to see these drawings 75 years later. It’s just crazy!”

Several days later when it arrived by Fed Ex, Morgan couldn't believe it.

"I cried more — and I hate to say this — than even when my father died," Morgan said. "He had died seven years before this. All I could think of was if he had been alive, this would've killed him. He would've been shocked."

Today, Morgan keeps the book in a safe deposit box.

"I'm afraid if my house were to burn down that's the first thing I would be, 'Oh, no!'" Morgan Weistling said. "I try to keep them under lock and key because they're just so valuable to us."