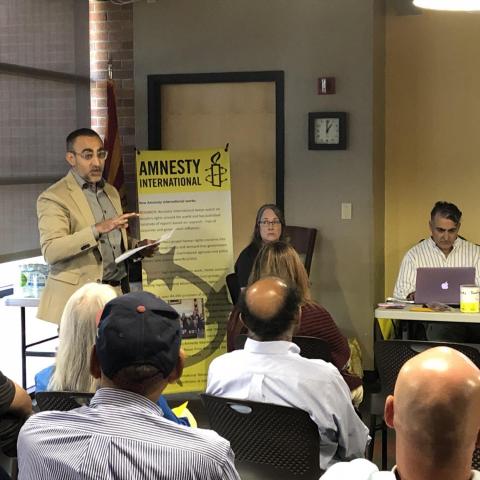 Imraan Mir, a native of Kashmir, gives a lecture for Amnesty International's Tempe chapter about the crisis in the region, Nov. 3, 2019.
Scott Bourque / KJZZ

For the past three months, about 8 million people in the disputed territory of Kashmir have been under a “lockdown” imposed by the Indian government, according to Amnesty International.

The organization says Kashmiris have been subjected to curfews, phone and internet shutdowns, arbitrary detention, deadly force against protesters and a lack of medical coverage.

On Aug. 5, India revoked Kashmir’s special status, which had been protected under the Indian constitution since 1949.

“There are 7.2 million people in Arizona. Imagine if our entire state was subjected to that,” Nasir Raza, an activist for Tempe’s chapter of Amnesty International, said.

Raza and about two-dozen other volunteers met at the Tempe Public Library to hear a lecture from Kashmiri native Imraan Mir and ask questions of Kashmiri panelists, all of whom have family members still in the area.

The audience watched several news videos detailing the human rights violations perpetrated by the Indian government in the region.

“India is being run by a fascist party that is wildly popular,” Mir said. “There is no opposition to what they’re doing.”

Raising awareness is why Ubaid Sheikh, a television broadcasting professor at Benedectine University, came to the lecture.

“We are at a point in our history where we have to either sink together, or we have to swim together,” he said. “Kashmiris may be the canary in the coal mine ... all the more imperative that we come together and do something on Kashmir and human rights as such. Silence is not an option anymore.”