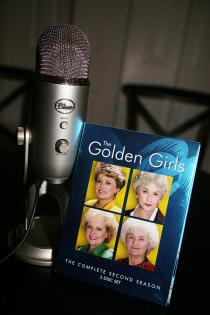 (Photo by Stina Sieg - KJZZ)
"The Golden Girls" has been off the air since 1992, but on "Thank You For Being A Podcast," the sitcom seems new again.

(Photo by Stina Sieg - KJZZ)
Anthony Desamito and Genevieve Rice have been tackling "The Golden Girls" scene-by-scene for about six months. Both are local comics, though they've had all kinds of creative guests from the Valley and beyond.

Millions of Americans used to spend their Saturday nights with four feisty females — who just happened to be senior citizens. “The Golden Girls” run on NBC ended in 1992. But the beloved sitcom lives on — at least here in the Valley.

On a recent afternoon, comedian Anthony Desamito was sitting in front of a large microphone, next to fellow comic Genevieve Rice.

“And we are recording! Yay!” he said, smiling wide. “Thank you everyone for listening to ‘Thank You For Being a Podcast.’”

The podcast stars the duo, as well as weekly guests, like local authors and other comics.

They watch an episode of "The Golden Girls," “and then we break it down, scene by scene,” Desamito said. “Because we opened up the Pandora’s Box, and now we’re going to ride that demon out.”

At least that’s how he described it in the most recent podcast, delving into “Take Him, He’s Mine,” also known as Season 2, Episode 3. (Full disclosure, I can be heard a bit on that one, while I was working on this story.)

Desamito and Rice have been deconstructing episodes, in order, for six months. Needless to say, they know Dorothy, Blanch, Rose and Sophia, better than ever before.

“How they date, how they eat,” Desamito explained.

“Oh, we know all their clothes,” Rice added. “We’ll be like, ‘Dorothy’s wearing that sweater again.’”

And that sweater is probably a loud turquoise with shoulder pads, worn with big, garish earrings. That’s the thing about “The Golden Girls," which started 30 years ago. It’s easy to laugh about the dated elements.

“Yeah, we can make fun of it,” Desamito said. “But overall, it’s a good show. And the writing is impeccable on it.”

“The writing and the acting,” Rice chimed in. “The acting is really great. And that’s something I didn’t really pick up on, you know, as a child.”

And she probably didn’t pick up on all that spicy humor, either. The show was full of blush-inducing jokes. (Case in point: when Blanche called Dorothy a prude, only  to hear the retort: “Not all of us are classified by the Navy as a friendly port.”)

Rice and Desamito say they chose "The Golden Girls" because they love it, and as comedians, they wanted to study the show’s structure. But for Desamito, this is also a personal thing. He was born in the United States, but raised in Mexico.

At 8, he came to Arizona with his family, and started learning English — thanks, in part to watching "The Golden Girls" with closed captioning.

“Bea Arthur taught me English!” he said, laughing. “Yes, I watch it, and I just feel like I’m back in that trailer in Yuma.”

But don’t think this podcast is all about nostalgia. The language can be rough and, like the show it celebrates, it can be deeply sarcastic. Things can get a little strange. In the most recent episode, topics included cult leaders, the mafia and how “The Golden Girls” have the world’s worst grocery store.

But it’s probably that kind of offbeat spontaneity that’s helped the podcast gain traction with fans and guests. Desamito and Rice plan to dissect all seven seasons of the sitcom.

“It’s weird, because if we don’t do the podcast one weekend, because we’ll double up sometimes, I’ll just feel really awkward, like something is missing,” Desamito said.