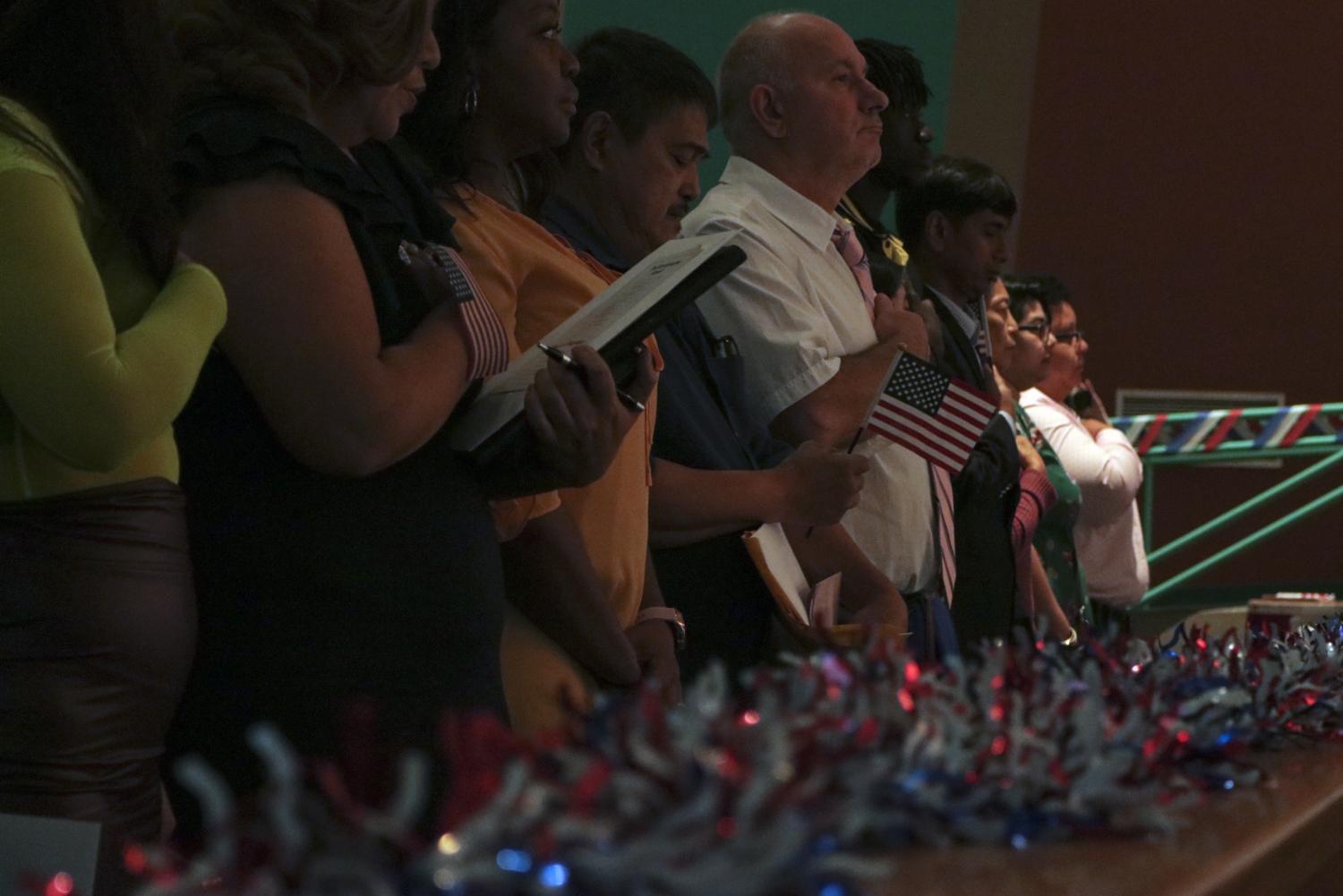 LAUREN GILGER: The U.S. has naturalized more than 7 million foreign born citizens in the last decade, according to Citizenship and Immigration Services. In fiscal year 2018 alone, more than 750,000 people were naturalized, earning the full legal rights afforded to natural born citizens. And as that trend continues, those numbers could spell trouble for President Trump. Los Angeles Times reporter Matt Pearce has been covering the 2020 election, and this week he reported on the potential of largely left-leaning naturalized citizens and how they could mean trouble for the president's reelection bid. Matt Pearce is with me now. Good morning, Matt.

GILGER: OK, so there are hundreds of thousands of citizenship requests every year. A lot of these folks are, as we said, often more left-leaning. Not always. But give us a sense of of how much trouble this could mean for the presidential campaign for President Trump. I mean, is this a big enough voting bloc to make a big difference?

PEARCE: I would say it's a big deal in some key swing states that could matter in the upcoming election, like Arizona. There are places like Florida that have a ton of immigrants — most famously known for Cuban immigrants who become Americans — but also a lot of other immigrants from other countries, too. And you're starting to see places like Texas that have historically been very, very red, very Republican, starting to become increasingly purple and increasingly within Democrats' reach due in large part to a lot of different demographic changes. But immigration is one of them. So you have these few key swing states where you have enough immigrants starting to become citizens, becoming registered as voters, that they could potentially have an impact on these really, really tight margins.

GILGER: All right. OK. So in the in the story you reported here, you talked to some of these newly naturalized citizens, and you cite some surveys that show that they are more liberal-leaning. But give us a sense of what you heard from these people.

PEARCE: So for Hispanic Americans, Latinos, they're feeling very under siege by the Trump administration. You know, and these are people, you know, keep in mind that they are immigrants themselves. They became legally lawful permanent residents who are eligible to naturalize. And so, you know, they have the personal experience of being someone who came to America and who has seen the way the president has talked about immigrants — and in kind of in a way talked about them — because President Trump's crackdown on immigration is not just on illegal immigration, but often many cases on legal immigration as well. And so they see that as an attack on themselves. And, you know, they understand the value of what it means to be an American. They understand the value of what it means to come from a country that might be poor or ravaged by war and to come to a place that's, you know, economically prosperous, peaceful, where you have democratic rights as a citizen, free speech. And so what you see is people wanting to naturalize in part often because they want to vote. They want to get involved with the political process. And many of them want to cast a ballot against President Trump in 2020.

GILGER: So you obviously also reached out to the campaign, the president's campaign here. They seem to disagree. What's their argument?

PEARCE: So their argument is that, you know, these immigrants, these new citizens, they're people who came to the country the right way. And they often have strong opinions about other immigrants who came into the U.S. illegally. And that is true up to an extent, and I should be clear that no voting bloc is a monolith. There are a lot of very conservative naturalized immigrants, and there are some of them who feel strongly about actually toughening immigration laws. But so far as I've seen from the surveys that I've looked at, some of these surveys actually survey Latinos and Asian-Americans who are naturalized. And they show that Trump is pretty unpopular with these groups, at least by a significant majority margin.

GILGER: Give us a sense of the rise and fall of these citizenship applications. We always, you say, see a rise in applications of this sort before a presidential election. But it looks like this was a little different because after the 2016 election, they continued to rise.

PEARCE: Yeah. And this is the really interesting thing about the Trump era, because as you said, there are a lot of people living in the U.S. who are legal permanent residents who just have not chosen to become a citizen or have, you know, for a variety of reasons, not gone through with the paperwork. Sometimes it might be too expensive or, you know, they just don't see the upsides of that because they're already living here, and they're legal. But in elections, you see you see a surge of interest normally. But what happened is in 2015, 2016, that surge of interest that you always see before a presidential election continued after Trump was elected. And so instead of dropping off, you continued to see very, very high numbers of people applying for citizenship, and that continued through 2018. 2018 had the largest number of applications for citizenship in any midterm election year that I looked at going back 20 years. And so it seems that there is continued strong interest from a lot of immigrants to become citizens. And that's likely to continue as we go into another pre-election year period in 2020. Inevitably, you know, history tells us that interest is going to continue to rise, and there are going to be a lot of immigrants who want to naturalize in time to vote.

GILGER: Yeah. All right. That is Matt Pearce, reporter for the LA Times, who covers the 2020 campaign. Matt, thank you for joining us.

PEARCE: Thank you so much for having me.