'One Water:' Scottsdale Gets Permission To Turn Recycled Water Into Drinking Water 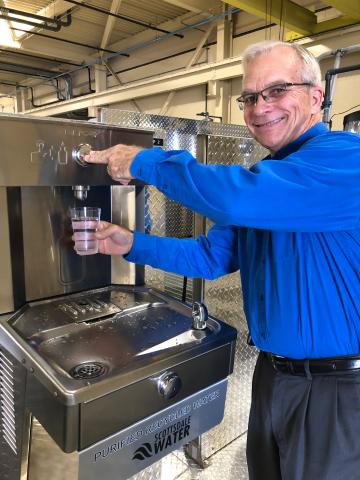 As of last month, Scottsdale’s Advanced Water Treatment Plant at the city’s water campus in north Scottsdale got permission to do something no other Arizona city can do: turn recycled water into drinking water.

"Up until January 2018, the state had a prohibition from human consumption of recycled water," said Brian Biesemeyer, Executive Director of Scottsdale Water. "And they lifted that in 2018, and then as a result of them lifting that, we worked with the state to get this first facility permit to allow serving recycled water."

Just because Scottsdale can serve recycled water to people does not mean that it does, although the city does offer tastes. This is one of three facilities in the country that’s allowed to do this, and Biesemeyer said for now, one of the main goals is to help water drinkers get over the “ick” factor.

"We are trying to help get folks through that thought of recycled water," Biesemeyer explained, "and just that little hesitation before you think of it and drinking it — try to get through that process. We don’t have any plans here to directly link this to our drinking water system, although we could. So, it does give Scottsdale the advantage in some later years, should that be necessary for us to link that to our water system, we could. We have no immediate plans to do so."

The process of treating this recycled water takes several steps. First, it goes through a standard reclamation process. And then to the Advanced Water Treatment facility. This is where it starts getting into the weeds — or maybe the pipes, in this case.

The water starts in the ozone process, which breaks apart molecules. Next, it goes to the ultra-filtration process, where membranes that look like very fine spaghetti filter out microns, viruses and other larger molecules. After that, it goes to reverse osmosis and finally UV photolysis, which does the final disinfection.

In addition, to get the Direct Potable Reuse permit, officials put in some more UV, as well as granular activated carbon, which absorbs materials that stick to it. They also re-mineralize the water, to give it some of its taste.

At the far end of this very large, loud room is a special drinking fountain, where visitors face the moment of truth.

Biesemeyer says if you’re curious, or skeptical, of drinking recycled water, you can taste some for yourself. The facility has given its water to 10 Valley breweries, which they’ll use in their beer-making process. Those beers will be served at the One Water Brewing Showcase during Scottsdale’s Canal Convergence in November.