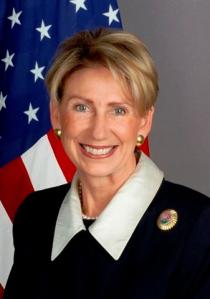 Arizona businesswoman and diplomat Barbara Barrett has been confirmed by the U.S. Senate as the next secretary of the Air Force. Her nomination was approved today.

Barrett has had a lengthy career in the aerospace industry and foreign relations. She served as ambassador to Finland during the George W. Bush administration. She also served as the senior adviser to the U.S. mission to the United Nations.

Barrett is a former chairwoman of the nonprofit Aerospace Corporation, which conducts space research and development activities and certifies rockets for launch. She also served on the boards of Raytheon, Piper Aircraft and the nonprofit Space Foundation.

She has trained as an astronaut and was part of the backup crew for the Soyuz flight to the International Space station in 2010.

The Senate confirmed her nomination on an 85-7 vote.