There’s an Arizona artist whose work has likely shown up in your home at some point. He’s the forensic sketch artist for the Phoenix Police Department and his work has helped catch kidnappers and killers.

In a dimly lit office at Phoenix police headquarters, Kirt Messick sketched on a computer screen.

“Photoshop it is a good tool but it doesn’t do the work for me,” he said. “It doesn't create anything. It’s still me behind a stylus still doing everything because I want that control. I need to have that control on it.”

That’s because he could be called to testify about how he came up with a suspect sketch. So, how does he do it? The answer is simple — and not so simple. It always starts with questions, not drawings.

“They walk through it and I’m letting them tell me everything that happened,” Messick said. “And as they start walking through specifics, I may say, what do you smell right now? Is there music playing? What do you hear in the background? Because I’m wanting to get all the senses of the brain to fire, to find those folders of what might be a little bit more memory, it’s aiding and recall."

Establishing trust is critical, especially when children are involved. The room that leads to Messick’s office has a couch and TV, toys and stuffed animals. Messick makes it clear to kids they should always tell him if he’s if he’s not getting it right. Even when things are going well, it can be tough. Messick remembers a 6-year-old boy who watched his father get shot.

“We had worked quite a bit, and he’d given me a lot of good information, and then all of the sudden the tears started and he said, ‘I just want Daddy back.'" Messick paused and continued. “You just got to keep it together. And I remember that, you know, just as vivid. And it’s hard to deal with those things but you got to keep it together because you got a job to do.”

Messick credits his faith and family with providing balance. The wall next to a chair where witnesses often sit holds a bulletin board filled with photos of Messick's wife and two young sons. He wants witnesses to see him as someone who cares.

“The more I can be vulnerable with them and be real to them, then they’re more apt to talk to me, they’re more apt to feel they’re in a safe place,” he said. “Even though my wife is Salvadoran, I don’t speak Spanish. But having someone that I trained to translate, that gives that bridge, that makes them feel comfortable ... I’ve seen the right person help me translate and before it’s over, they’re best friends.”

Messick said his job is not to actually identify a suspect but to provide a tool for detectives. He said he doesn’t draw faces. He draws the parts that make up a face. When those parts come together, he has a composite that’s often shared publicly.

“If I can get that likeness then, somebody will say, 'Oh, that kind of reminds me of somebody who comes in and gets coffee every day,' or, 'I’ve seen this person in the neighborhood,' or whatever,” he said.

Detective Anthony Brokaw works in the crimes against children unit for Phoenix police. He recalls a high-profile case last year that could have gone unsolved if it hadn’t been for Messick’s sketch.

“Hugely important,” he said. “We had no idea what we were looking for.”

Just after 3 a.m, a man broke into an apartment and grabbed a 9-year-old girl out of her bedroom. She pretended to be asleep as he carried her a few blocks away and, when he set her down, she took off running.

“We, within two hours, we flooded 50 detectives and patrol units in the area trying to find this guy,” Brokaw said, “We couldn’t find the guy.”

About eight hours after the girl had been kidnapped, cops had a sketch and hit the streets. That night they had a suspect and earlier this year he pleaded guilty.

“Really, really lucky story with that one,” Brokaw said.

Forensic art is not always about catching the bad guys. Sometimes it’s about saving the innocent ones. Forensic artist Jeanne Cybulski remembered a call she took for help at the Mesa Police Department’s Crime Lab.

“We had a young boy that was hit, he was riding his bike in the East Valley, and he was hit by two separate drunk drivers, they were both drunk drivers,” she said. “They didn’t expect him to live, but kept him on life support until he could be ID’d.”

Cybulski received a photo of the boy hooked up to machines and started drawing.

“And I just did a composite of what I felt like without everything he would look like, and they put it out on the news, and the next morning his sister called in, and it was her brother,” she said. “And when they got to the hospital and spoke to him, he opened his eyes and woke up and lived.”

No one really knows how many Jeanne Cybulskis or Kirt Messicks there are because there’s no comprehensive national database for forensic artists. Cybulski is secretary for the Forensic Art Certification Board for the International Association For Identification. It lists 10 certified artists in Arizona.

“Surveillance video has really improved since I’ve been doing this and that has cut back on the amount of composites necessary,” Cybulski said.

As technology evolves, Cybulski thinks forensic artists will still be needed. Last year, she joined others in law enforcement to visit a Valley business that offers a facial recognition system, a way to identify or verify a person from a digital image or video. 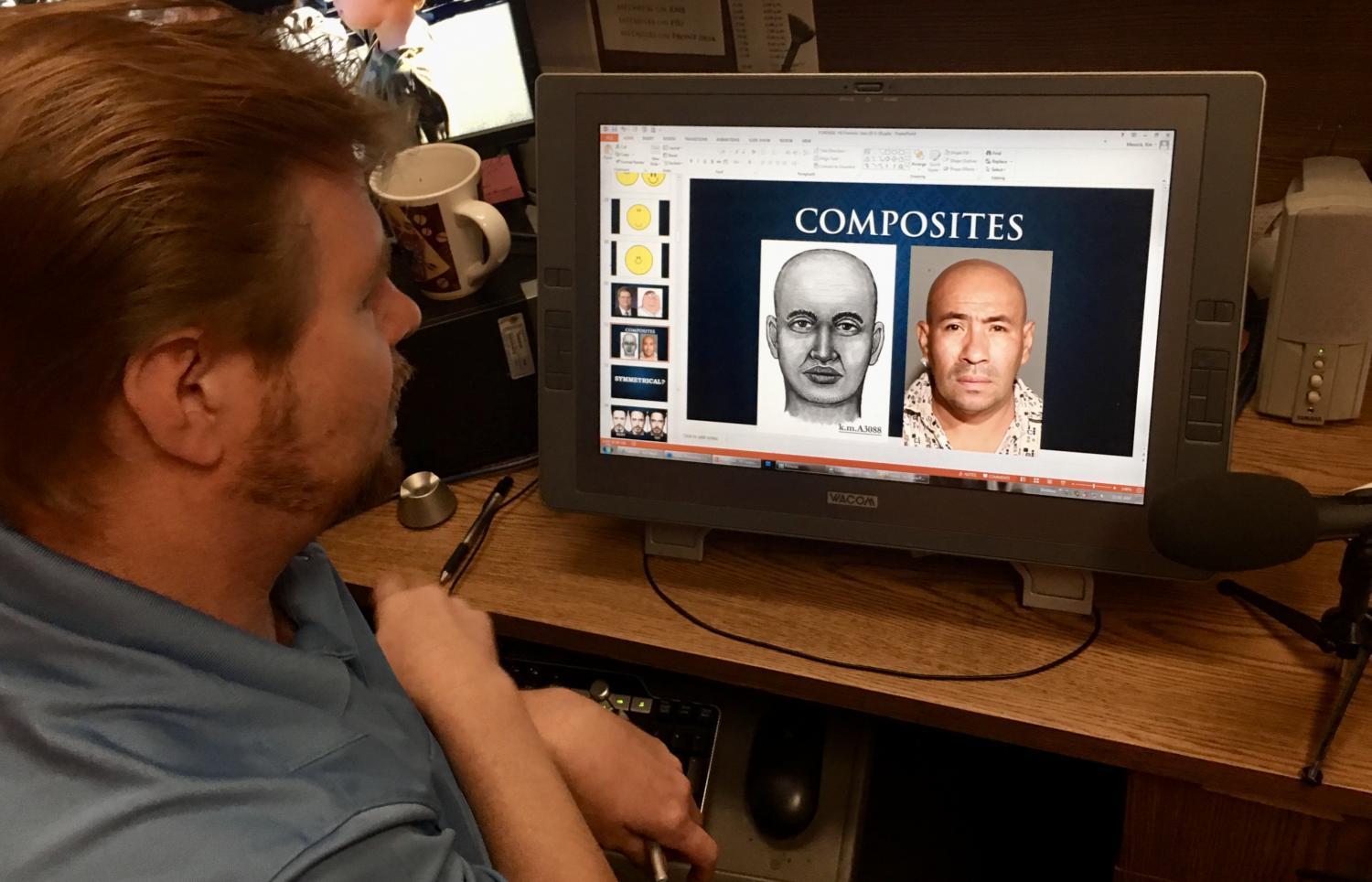 Christina Estes/KJZZ
After interviewing a witness and taking notes, Kirt Messick uses a stylus to sketch on a computer.

“It’s amazing how much easier it was for me to compare still booking photos with video that come from this database,” she said. “It was easier for me as a forensic artist because of my basic knowledge of the face.”

Messick has been asked to create composites more than 1,000 times. The requests don’t always lead to sketches. Sometimes the witness just doesn’t have enough to go on.

“One of the big things I always want to hear is that shape of head,” Messick said. ”When I say shape of head I’m talking chin, jawline. The hair may frame some of that but you’re still going to determine cheekbones, cheeks. And then how the brow bone and everything fits together.”

It’s the specialized training in anatomy and interview techniques that makes the human touch meaningful and successful.