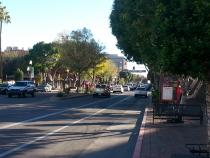 Tempe officials expect 300,000 people to squeeze into the downtown area Saturday, an unusual amount for this time of year.

The Mill Avenue district usually attracts a much smaller crowd for its annual weekend arts festival in December. But you may have heard the Pac-12 college football championship will be played here Saturday night. The number of visitors will skyrocket.

“We normally have a great day on a football game and a fabulous weekend for the art festival and putting them both together it is a logistical nightmare,” said  Nancy Hormann, Executive Director of the Downtown Tempe Community, a nonprofit group that works to promote the area. "But something that we live for. So it’s really something that we think we can handle.”

Hormann said the district has hosted multiple events on one day before, but this time it’s different. It is the first time ASU has hosted a Pac-12 Championship game at Sun Devil Stadium. Several streets, including Mill Avenue, will be closed for the entire weekend — so, Hormann says, the first priority is traffic flow. If you’re going to the art festival, she says get off at Priest Drive.

“And if you’re coming for the football game then go to the east side at Hayden Ferry on Rio Salado,” Hormann said.

Or you can take the light rail.

“Riders can count on catching a train on a typical Saturday schedule every 15 minutes,” said Susan Tierney, the Valley Metro spokesperson. “However, we will be offering additional train trips, or trains in between the 15 minute schedule just to accommodate the higher ridership that we anticipate between Mesa and Tempe.”

Tierney said Valley Metro is using all its light rail cars to support the crowds. Each train will have three cars transporting at least 600 hundred people at a time. "We will have transit security positioned at the stations in Tempe, as well as additional fare inspectors and security officers on board the trains.”

Like all large events held here, police officers will be spread across downtown and around the stadium. Tempe Police Department spokesperson Mike Pooley says at least 100 extra officers will be brought in to help.

“We have DPS that’s bringing a lot of man power. Scottsdale, Mesa, MCSO, and some other agencies that are gonna be bringing in different resources," Pooley said. "We’re gonna have additional mounted units our horses out here with officers. We’re gonna have additional bike officers. Just know that you’re in good hands. We want people to come out and have a good time."

Downtown Tempe Community’s Executive Director Nancy Hormann agrees. She says the city doesn’t shy away from events like these.

“Having a championship, something we haven’t had in forever is an amazing thing to really perpetuate what is the new energy in downtown Tempe," Hormann said.

According to the Tempe Tourism Office, that energy could generate $8 million over the weekend.

EDITOR'S NOTE: This story has been modified to reflect the correct spelling of Tempe Police Department spokesperson Mike Pooley.