Secretary Of Defense Visits ASU, Pushes US To Focus On Asia-Pacific 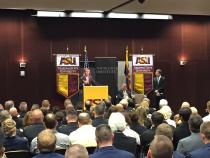 (Photo by Will Stone - KJZZ)
U.S. Secretary Of Defense Ashton Carter laid out plans for strengthening economic and military ties in Asia and the Pacific.

United States Secretary of Defense Ashton Carter was at Arizona State University on Monday making his case for a renewed focus on Asia and the Pacific. The Secretary is on his way to the region this week and used his stop in Tempe to lay out the ongoing efforts to bolster military and economic ties, a strategy that has been termed the "rebalance" to Asia.

Carter told the room of military members and students that America’s future hinges on a strong relationship with its allies there.

"Over the next century, no region will matter more for American security and also for American prosperity [than Asia]," Carter said.

In 15 years, more than half of the global middle class will live in Asia, according to Carter. This market, plus the rising military power of countries like China, are some of the compelling reasons for refreshing partnerships with countries such as Japan, Vietnam and South Korea.

Carter said this strategy isn’t just about military cooperation, but also ensuring the U.S. doesn’t get left out of trade deals — something that’s already happening.

“[Those] agreements don’t incorporate our high standards and leave us on the sidelines," Carter said. "That risks America’s access to these growing markets and it risks regional instability."

Carter cites the proposed agreement with 11 other countries, known as the Trans-Pacific Partnership, as critical for opening up Asian markets to America and Western states. He said exports already support nearly 100,000 jobs in Arizona.