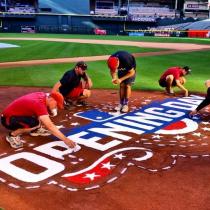 Spring training is over. Opening Day kicks off with the Arizona Diamondbacks hosting the San Francisco Giants on Monday evening.

Arizona is coming off a disappointing 2014 season, finishing last in the division with a record of 64-98. But they’ve since cleaned house. In May, Tony La Russa came on board to oversee the operation as chief baseball officer. The Hall of Famer went on to hire Chip Hale as manager and Dave Stewart as general manager.

Nick Piecoro, who covers the Diamondbacks for the Arizona Republic, said the team needs to stay healthy and improve its pitching game in order to have a better season.

“They are going to need guys to emerge on the pitching staff," Piecoro said. "They just did not get very good results from their pitchers last year. Some of that is going to be guys maturing and throwing better. Some of it will come from the new guys they added in the off season."

He said the team has focused on bringing in power arms — guys who can throw fastballs in the mid 90s and overpower other hitters — and expects that will bring a new dynamic to their rotation.

According to Piecoro, it is still too early to say how the changes in management will affect the on-field play, but the coaches believe the team has enough talent to be a serious contender this year.

“A lot of people will look at the Diamondbacks and consider them kind of a rebuilding team," Piecoro said. "The Diamondbacks don’t really give off that impression. They believe they can surprise some people."

The Opening Day game against the Giants gets underway at 7 p.m. Monday night.