Public Sounds Off On CPS Scandal 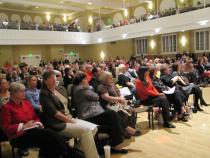 Stina Sieg - KJZZ
Phoenix's Memorial Hall was filled to capactiy - and then some - by people who were eager to voice their concerns about Child Protective Services in Arizona. The agency has been in the spotlight since thousands of cases ignored by the agency were found.

Hundreds of people showed up to an open forum Tuesday night about Child Protective Services in Arizona. The town hall-style meeting was the first of its kind since the discovery of more than 6,000 cases of child abuse or neglect that were ignored by the agency.

Memorial Hall in Phoenix’s Indian School Park was so packed, not everyone could find a seat. A continual stream of passionate speakers offered up critiques and ideas. But there were also scores of people outside – many were like Debi Rice, dealing with restless children. She said she came that night to urge CPS to listen to foster parents like her, especially when they’re worried about biological parents.

Some CPS case workers are great, "but there are others who dismiss myself as a foster parent or others," she said. "And the concerns, they don’t seem to be taken seriously."

Rice has been foster parent to 20 children over 15 years, and she just wants to be heard by CPS. Fellow foster parent Julie Brunzi brought up biological parents, as well. She worries that CPS doesn’t have the resources to help families that are eventually reunited after foster care.

"Most support services are stopped for the bio family, so they’re not held, there’s nobody checking up on them," Brunzi said, "and this is a really, really stressful time for these families."

Brunzi added that everyone in the system needs more support — and CPS simply needs more money, too. The agency has been cut by tens of millions of dollars in the last few years, and that’s led to overworked staff and high turnover.

A young CPS worker who wanted to remain anonymous said hardly anyone in her office has been there more than a few years. She works with 35 children, In her words, "that’s not at all manageable."

"And you just know that there’s more cases to be handled," she said. "And you do the best you can, every single day, but it is exhausting."

She said new case workers like her often say it feels like they’re drowning. She’s only been on the job 10 months, but she’s already asking herself ominous questions.

That’s the kind of worry Charles Flanagan hopes to address. He’s the director of Gov. Jan Brewer’s new Child Advocate Response Examination Team, which is tasked with overseeing the thousands of neglected CPS cases. Flanagan said it’s clear that all of the night’s speakers care very deeply about the CPS and its large caseload.

"And there is enough support in this room for the kind of cases that have to be made, that we can partner with people to make those happen," he said.

But recommendations for reform will come later. Flanagan said the first priority is making sure the thousands of children ignored by the agency are safe.