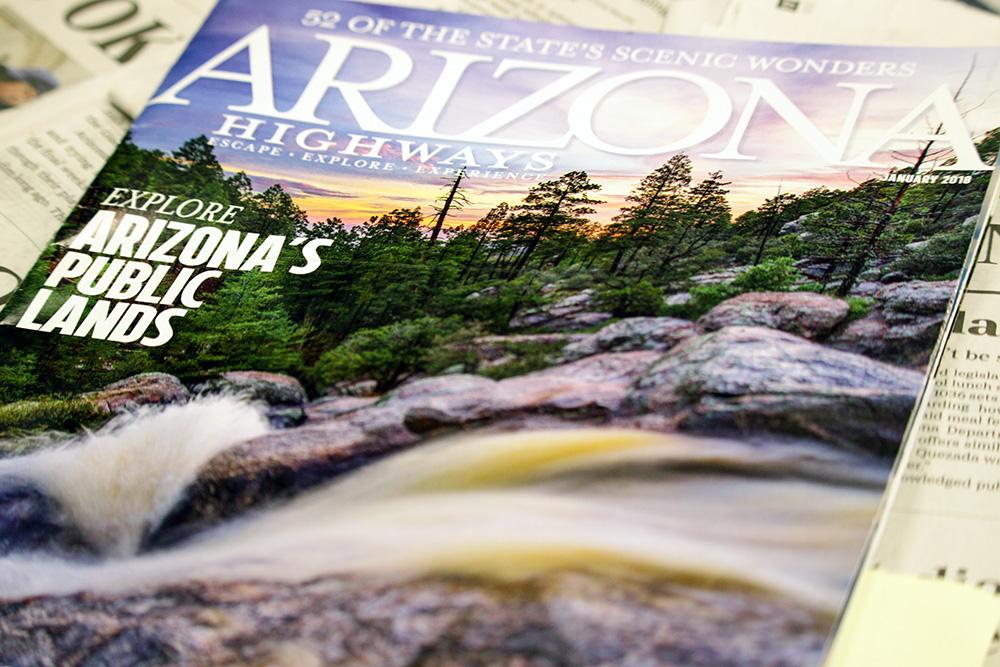 Jackie Hai/KJZZ
The Arizona Highways magazine is one of 7,000 publications that have been banned by the Arizona Department of Corrections.

Jayne Mallory still listens to the CDs that helped her get through prison. She has a broad taste in music — everything from Beyoncé to Michael Buble.

She says Buble’s crooning had a calming effect on her and the other women living at the Perryville Prison when she was there from 2016 to 2018. Which is why she was surprised when it was labeled by the Department of Corrections as contraband.

Mallory had to appeal to prison officials, who relented after removing a suspicious hologram on the packaging.

The same thing happened with a science-fiction book series about a private investigator in space.

After another appeal, the books were allowed, but she says it illustrates the haphazard nature of censorship in the prisons.

From 'The Art of War' To Dog Fancy

A spreadsheet released to KJZZ from the Arizona Department of Corrections lists more than 7,000 entries with more than 5,000 publications — including books, magazines and CDs — that are banned in state prisons.

They range from ancient texts like Sun Tzu’s "The Art of War" to lighter publications like "Dog Fancy."

Paul Wright
"The Celling of America" is another publication banned by the Arizona Department of Corrections.

"If a publication is excluded, in whole or in part, the mail room staff notifies the inmate and publisher," Wilder said. "Personnel are trained to exercise common sense and good judgment in their review, and to critically analyze their exclusion decisions."

"ADC’s process enables that decision to be appealed by both the inmate and the publisher to the Office of Publication Review (OPR), which carefully reviews the item to determine whether to uphold or reverse its exclusion, again, in whole or in part," Wilder said.

A records request to ADC revealed that the Office Publication Review consists of two people with the title of administrative service officer: Diane Miller and Loresa Purden.

Wilder points to ADC a department order governing unauthorized content in publications entering the prison system, adding that "personnel are trained to exercise common sense and good judgment in their review, and to critically analyze their exclusion decisions."

But ADC's guidelines have recently come under fire in federal court.

Paul Wright is the publisher of Prison Legal News, a monthly publication that curates criminal justice news as well as jail and prison litigation. It won a federal court case against the Department of Corrections, in which the judge ruled ADC’s policy against sexually explicit material, overbroad and unconstitutional. In a ruling issued in March, United States District Court Judge Roslyn Silver found ADC's policy “violates the First Amendment on its face.”

Wright said incarcerated people have a right to read educational as well as recreational materials. “Whether they’re reading trash romance novels or you know, Tolstoy and Shakespeare, it doesn’t really matter," Wright said.

Ironically, the material in question in the Prison Legal News lawsuit was a court ruling describing a sexual assault by prison staff against an inmate.

“I think it’s part of the hostility we see by government officials," Wright said, "where they’re willing to do almost anything they can to prevent prisoners from learning what can be done about vindicating their rights."

Andy Chan is the vice president of Books to Prisoners, a Seattle-based nonprofit that sends books to incarcerated people all over the country. He says they get about 14,000 requests each year. Dictionaries are the most sought after book, followed by educational materials, and escapist novels.

He says he’s witnessed a new wave of restrictions at state prisons in the past few years that prohibit third parties like Books to Prisoners from sending materials. With a few exceptions for security purposes, Chan argues access to reading materials for incarcerated should be unfettered.

Jayne Mallory says it took her a while to adjust after coming home from prison.

“I mean your brain is really limited use, she said, "because you are not making choices for yourself.”

She says having ADC tell her what she could and couldn’t read and which songs to listen to damaged her self confidence.

“At some point, if you don’t have a trust factor and have a little bit of respect you know it just keeps you down," Mallory said.

She says giving inmates greater access to reading materials and more control over what they consume while they’re incarcerated will help them write their own story of a successful re-entry.

EDITOR'S NOTE: This story and headline have been corrected to clarify that Arizona Department of Corrections records of banned publications included more than 7,000 entries, some of which were duplicates. More than 5,000 individual publications have been banned by ADC through June 10, 2019.