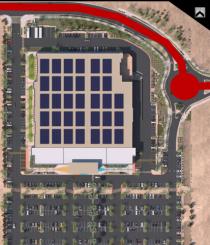 City of Phoenix
A rendering of the planned sports arena and hotel in Phoenix.

Plans are underway for a new amateur sports arena and hotel northeast of Interstate 17 and Loop 303 in Phoenix.

“For my daughter, for my family, to be able to have access to a facility that’s going to be as world class as this, and I think thousands of other families would just be thrilled to have an amenity like this,” he said.

A private developer, Legacy Sports Arena LLC, wants to build two regulation-size ice rinks, 10 courts for volleyball, basketball and other sports, plus an 88-room hotel on a 20-acre vacant parcel.

Legg wants the city to reimburse the developer up to $800,000 to extend Bronco Butte Trail, build a new public roundabout and add street lighting and sidewalks.

He said up to 300 construction jobs will be associated with the project and dozens more generated from the ongoing business operations of the arena and hotel which will include dining and retail elements.

The subcommittee recommended the full council support the reimbursement, which would take place over a 10-year period.