Download mp3 (6.66 MB)
Kathy Ritchie/KJZZ
Since opening its doors to family pets in 2015, Sojourner Center has cared for nearly 240 pets.

When we think about victims of domestic violence, we often think about women. In fact, according to the Centers for Disease Control and Prevention, 1 in 4 women has experienced some type of violence in their lifetime, but there are other victims that we don’t always think about.

It’s a steamy August morning at Sojourner Center, a domestic violence shelter in central Phoenix. In the background are the sounds of barking dogs. Those pups belong to a woman named named Lamecia. We won’t use her last name to help protect her identity. Lamecia is visiting her dogs at Sojourner Center’s Pet Companion Shelter, which is just around the corner from where she’s staying on campus.

Before she arrived in May, Lamecia was a victim of domestic violence. I ask her if her abuser ever hurt her dogs.

"Sometimes, but not all the time," she said. "It was more towards me than towards the dogs." 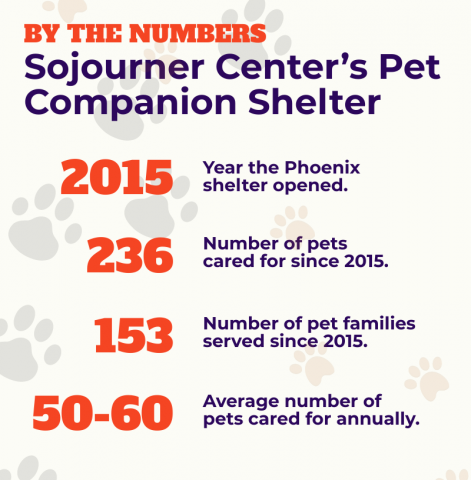 "Yeah, we hear a lot about small dogs getting thrown by throats, being whipped around by their collars or leashes, stuff like that," said Bruce.

Bigger dogs, she says, tend to be hit or kicked. It’s one reason why this place exists.

"Forty percent of domestic violence survivors will report that they wouldn’t leave because they couldn’t ensure the safety of their cat, dog or other animals," said Gordon Sims.

Sims is the director of philanthropy at Sojourner Center. He says this is one of the only domestic violence shelters in Maricopa County — and possibly the state — that welcomes family pets, including dogs, cat, hamsters, fish, birds. They once even housed a goat.

"And so the pet companion shelter that started in 2015 is really our first phase into being able to honor the entire family and make everyone safe," he said.

Because even pets who witness abuse, whether it’s physical or verbal, experience trauma.

"A lot of them come in scared. We can’t put our hands on them. There’s a little Chihuahua who we couldn’t touch for about five weeks. and now he’s a sweet heart," Bruce said.

In 2016, the American Pet Products Association found that nearly 70% of US households owned a pet in 2016; yet, less than 10% of domestic violence shelters across the country allow pets, according to the Banfield Foundation, a nonprofit animal organization.  Banfield Foundation recently awarded Sojourner Center a $25,000 grant so they can create six pet-friendly rooms. But for now, pets are housed in their own shelters — dogs one side, cats on the other.

I'm sitting on the floor of the kitty room with Jamie Cling. She an animal care tech here at the pet companion shelter. We have treats. A lot of the cats here have experienced abuse or neglect. Some are skittish. One little guy, who is all black, and hard to see, likes to hide way back in the cupboards. He’s a bit of a work in progress. 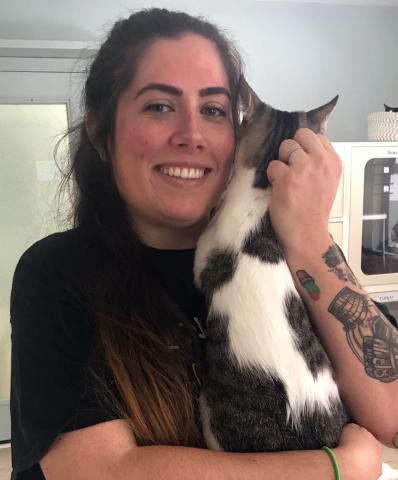 Kathy Ritchie/KJZZ
Jamie Cling works in the Pet Companion Shelter at Sojourner Center. Part of her job involves rehabilitation cats who might have experience abuse or neglect.

"So, I would just sit down first and let them come to me and work my way with petting and rubbing and in a room this size I’ll sit on the bench with some treats or cat nip, which is really good, then they’ll slowly become more comfortable.

Dogs can be tougher to rehabilitate.

"It's much more common for them to come in with histories of physical abuse," said Trevor Heffner, manager of the Pet Companion Shelter. "We have had dogs in the past that take on the protector role."

And that means they often get the brunt of the abuse, he said.

When they do get over that hump, Heffner says the dogs can get attached really quick.

"There are a couple dogs in here that if they’re out in the yards … if I walk through them, they bark and whine and I can’t help myself and sit with them for a little bit," he said.

So, those are the stories you want to hear, and there a lot of them. But this is still a shelter for abused pets. And some of them never recover. Trevor and Jamie tell about this one dog who took on that protector role.

Cling said the dog was put through very physical abuse by the husband. He had been beaten with his metal leash and kicked.

"Then the husband would get violent with the children and the wife and  the dog started stepping in," she said. "Literally jumping in front of the kids to block that from then."

By the time he got here, he was incredibly aggressive with staff. The dog had to be euthanized.

"Oh, yeah, that was a really hard day for me," said Cling.

The people who work at the pet companion shelter aren’t just helping the animals who come through here… They often support the kids who love them, and have to cope with the trauma of seeing a family pet hurt.

Kathy Ritchie/KJZZ
The cat room at the Pet Companion Center is designed to make sure cats can hide-out, get away from other cats, and take in the view from above...