Download mp3 (6.55 MB)
Bret Jaspers/KJZZ
Debbie Nez Manuel was on of the organizers of a Community Conversation about voting in July.

Native American tribes in Arizona are working on boosting turnout in next year’s pivotal federal and state elections. The effort involves talking to county officials about election infrastructure and educating people on how to cast a ballot.

Voter outreach brought a group of Native American voters and leaders to Scottsdale Community College on a Saturday morning over the summer.

The seminar had some voting die-hards there, like Arlene Old Elk, a member of the Navajo Nation. She started Election Day last fall by voting on the reservation in her tribal election. She then drove back to the Valley to cast a ballot in state elections.

“I drove 16 hours, round trip, to do this,” she said. “I consider voting [a] very important privilege.”

But the meeting also attracted less-experienced voters like 23-year-old Sa-ha-na Jackson, a member of the Yavapai Apache Nation in northern Arizona.

“I feel like when I think about voting, my first instinct is tribal. Like, I rarely think about state,” Jackson said. “I just only recently have gotten into how education affects people on my reservation, indigenous peoples in general.”

Bret Jaspers/KJZZ
The event was one of a number of meetings in 2019 aimed at boosting voter awareness and participation.

Jackson isn’t alone. The turnout percentage in state and local elections among Native Americans of voting age is about half the rate of Arizonans as a whole, according to an analysis from One Arizona. There are several reasons for the lower turnout, including lack of transportation and the fact that many people living on reservations don’t have traditional addresses.

But a higher turnout from Native Americans across the state could add thousands of votes in 2020, when Arizona is expecting close races for president, U.S. Senate, and the state Legislature.

Organizer Debbie Nez-Manuel, a citizen of the Navajo Nation and co-founder of Morning Star Leaders Inc., said events like this are about getting the message out early.

“The sooner we have these conversations and we get started the better and more informed people will be,” said Nez-Manuel, who is also a candidate for the state Legislature. “It’s kind of nice too because we get them when they’re not overwhelmed. Because when election time comes around, there’s gonna be so many different messages.”

But improving turnout is not just about boosting interest. There are improvements in election infrastructure that could help.

Nez-Manuel, for one, said she wants to see more Native American deputy registrars, specifically in Maricopa County. Those are volunteers who help the county Recorder’s Office with voter registration at events.

“If we can get these individuals trained and to [events], they can have these meaningful conversations without one person racing around or just sitting at a booth,” Nez-Manuel said. “They can walk around and have really, really good conversations.”

Bret Jaspers/KJZZ
Patty Ferguson-Bohnee is director of the Indian Legal Clinic at ASU.

Another coalition of groups, including the Inter Tribal Council of Arizona, One Arizona and All Voting is Local, is trying to figure out what kind of election infrastructure tribes should ask for, and when. In past years, requests for specific early voting locations or other infrastructure have come after those decisions were already made.

The coalition has held three meetings so far this year.

“By having these meetings in 2019, hopefully it’s going to be better in addressing some of the tribes’ concerns and meeting the deadlines of the counties,” said Patty Ferguson-Bohnee, director of the Indian Legal Program at Arizona State University’s law school.

“I want them to know that I’m here and I want to help, and I want to make things better [so] that we have a good, trusting relationship,” said Michele Forney, the elections director in Pinal County.

“Non-Indian voters, there’s a high rate of voters by mail. But that isn’t in Indian Country because Indian Country doesn’t have access to the mail in the same way,” she said. “People don’t receive their mail at homes, some people have to drive over an hour to get their mail. It takes longer to get your mail because of the routing system.” 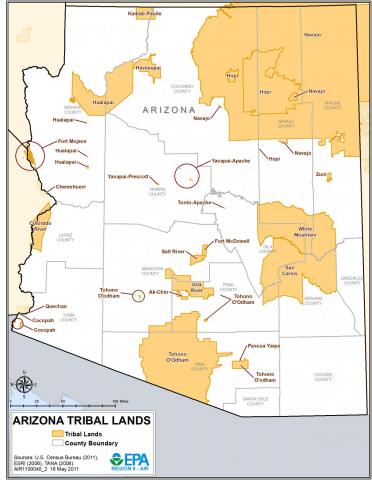 epa.gov
There are 22 Native American reservations in Arizona. Voting for state and local elections, however, is administered by counties, and some reservations straddle county lines. Residents may have different voting procedures depending on where they live.

A strategy to deal with less mail access had been to encourage in-person early voting. A new state law, however, requires in-person early voters to show a photo identification. People who vote by mail don’t have to do that; they simply have to sign their ballot.

And while tribal ID is an acceptable form of ID at the polls, Ferguson-Bohnee said poll workers don’t always correctly apply the law, leading to confusion.

And there are other recent examples of state laws affecting how Native Americans vote.

“I had an action plan,” Willeford said. She would recruit young people to knock on doors and collect ballots “so that nobody forgets.”

But since the state Legislature made that a felony, her stance has been, “I’m not touching it.”

Willeford is moving forward with a series of awareness events ahead of 2020, and said she can motivate her community members by reciting the history of the long struggle to secure the right to vote.

She has ample material to draw from. White people infringed on Native American voting rights in Arizona in different ways until the 1970s, when the federal government imposed a nationwide ban on English literacy tests.

“My goal for the Salt River Pima Maricopa Indian Community is to get a 100%,” Willeford said. “Is that real? I would hope so, but at least to increase it by 15% I think is a realistic goal.”