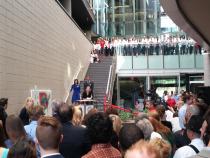 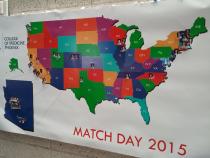 Arizona will soon be facing a physician shortage, particularly in rural areas. Is the state doing enough to attract new doctors and keep medical talent in state?

A recent national study states the supply of doctors will fall short of the demand by up to 90,000 physicians by 2025. And with this week being the five-year anniversary of the Affordable Care Act, the report also points out expanded medical coverage under the ACA continues to increase that demand.

However, that was not on the mind of Rebecca Fega last Friday at University of Arizona’s Downtown Phoenix College of Medicine.

“I’ll be staying locally in Phoenix, yes," said Fega. "I matched into radiation oncology at Mayo Clinic here in Arizona. My top choice! Yay! So excited!”

Fega, a senior studying cancer, celebrated with medical students around the country as they learned their residency placements at an event called Match Day. Stuart Flynn, Dean of UA’s College of Medicine, celebrated alongside.

“It’s what these young people have worked for for years and years and years," Flynn said. "And then they get to celebrate with an amazing amount of success of where they're all going, and hopefully we’ll get a bunch of them to come back.”

The event isn’t supposed place students specifically in Arizona, but more the best location to match their specific study. Only 20 of the 54 seniors at UA were placed in Arizona, mostly in the Valley and a few in Tucson. Flynn recognizes it isn’t possible to keep all the students in state, even with capacity at local hospitals.

“And that’s part of where we need to pick up our game in this state," said Flynn. "Because we need to have programs and we have some but we need more. They want to stay here and 75 percent of them are from here, so it’s be really nice to keep them here and start to address the physician shortage in Arizona.”

That shortage is heavily felt in rural areas of the state and there is a program for this. Dr. Carlos Gonzales is the director of UA’s Rural Health Professions Program. He says what students are electing to study and what the needs are of aging rural populations are going in two different directions.

“The challenge is to encourage more students to go into primary care because that is where the need is going to be for our society," Gonzales said. "Too many of our students are still enamored by sub-specialties that garner more income after they graduate from their residencies.”

“A lot of patients that exist in rural Arizona are what we would classify as working poor," said Gonzales. "They work for small companies that in the past couldn’t afford health insurance for their employees. Now the Affordable Care Act makes that more financially viable and it has increased the availability of health insurance for our rural citizens.”

Mid-level providers, including physicians assistants once got $15,000. The new legislation bumps that to $50,000, and now the program is offered to mental health professionals.

“We recognize that mental health is such a need in Arizona," said Roscetti. "So every county in the state is in a mental-health professional shortage.”

These perks are hoping to make more students elect to stay, such as Kellie Wheeler. who will be practicing family medicine during her residency in the Valley.

“Really excited, I’m happy," said Wheeler. "I’m excited I don’t have to move and I still have roommates.”

So no matter the benefits, she is one more doctor that Arizona will be happy to keep.