'She Said:' The Story Behind Breaking The Weinstein Sexual Misconduct Report 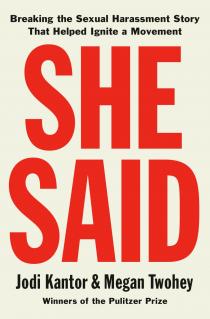 Penguin Press
"She Said: Breaking the Sexual Harassment Story that Helped Ignite a Movement" by Megan Twohey and Jodi Kantor.

MARK BRODIE: What started with an attempt to get a reluctant source on the phone turned into an investigation that helped inspire the #MeToo movement. New York Times investigative reporters Megan Twohey and Jodi Kantor chronicle their work on the investigation into allegations of sexual misconduct against the film producer Harvey Weinstein in their new book, "She Said: Breaking the Sexual Harassment Story that Helped Ignite a Movement." Megan Twohey joins me to talk more about it and Meghan I'm curious when did you and Jody realize that you were really onto something here?

MEGAN TWOHEY: Well it was probably about a month or so into the investigation when we started hearing allegations of a similar behavior, which we ultimately started to call "the pattern." Harvey Weinstein basically creating work meetings and other types of work encounters, oftentimes in his hotel room with either young employees of his company or his companies or with aspiring actresses, in which he basically would you know make requests for massages or other types of kind of physical aggression that left the woman either terrified or in some cases having sort of suffered actual assaults.

BRODIE: And it seems like at a certain point you realize that, while yes that was a really big and important story, a big component of that were these settlements or NDAs, non-disclosure agreements, that victims, some of them, had signed which precluded them from really talking about what had happened.

TWOHEY: Right. So there was a moment in our reporting where we started to realize that there had in fact been a pattern of alleged predation, but starting to learn about the pattern was very different than being able to actually publish a story about it. There was this cloak of secrecy over Hollywood and women were terrified to go on the record with their stories against Weinstein because he had been able to wield so much power and there also were these secret settlements that we were able to document as many as eight women who had, after coming forward with allegations against him, had been sort of steered by their lawyers into settlements in which they were accepting money in exchange for silence. So there were times where we would knock on women's doors and they'd say 'Oh my goodness I've been waiting for this knock on my door for 25 years,' and yet they were legally prohibited from talking about what had happened to them.

BRODIE: One of the things I found most interesting in reading this book was just that fact, that in many cases attorneys had steered their clients towards signing these settlements, which in some if not many ways really did not seemingly work to their client's advantage.

TWOHEY: Right, so I think that there has been some general knowledge of these settlements that have been used to sort of settle civil matters of all kinds, but I think in the case of sexual harassment and sexual assault, we're only now realizing that these have been used as a tool and a method by which predators can cover their tracks and can go on to continue to hurt other people without leaving a trace. And the restrictive clauses that go along with these secret settlements would make your jaw drop. These women can't tell their husbands what happened to them, if they want to go see a therapist about what's happened, the therapist has to send in an NDA, they have to turn over evidence or any other documentation about what they've experienced, in some cases, their attorneys agree to go to flip sides and work for the alleged perpetrator moving forward. And also jaw dropping are the some of the lawyers who have been involved in this. Some of the biggest most visible champions of women and victims’ rights advocates including Gloria Allred have steered their clients into these types of secret settlements.

BRODIE: Do you get the sense that these kinds of settlements are still sort of standard operating procedure if not just in in entertainment than in other fields as well?

TWOHEY: These secret settlements are being signed every single day in the United States, and it's not just in Hollywood, and I think that you know sort of two years into the #MeToo movement taking off in earnest, there are real questions about the sort of lack of systemic change that's happened and the lack of reform that I think both accusers and the accused are seeking.

BRODIE: Let me ask you about the impact of your reporting and of this book. Obviously, Harvey Weinstein is no longer in a position of power. I'm wondering beyond that what you consider the impact of these months and years and all the hours of reporting that you and Jody put into this.

TWOHEY: Well we've just been staggered. I mean had no idea that the Weinstein story was going to have the type of impact that it did. You know in 2017 all we knew at the New York Times is that we were committed to covering sexual harassment in a variety of industries. And so we knew that we were committed to seeking to expose sexual harassment, but we really had no idea what the impact was going to be. Now, I think two years in, there's as I said a lot of confusion and complicated questions and people are frustrated that there has not been the type of kind of adequate reforms put in place to catch up with the cultural shift, but we as reporters feel like you can't solve a problem you can't see. So we are going to kind of continue what we think, to contribute what we feel capable of doing, which is working to unearth the facts and publish them.

BRODIE: And without asking you to give away any potential scoops or anything I mean are there particular areas or industries which you think are particularly ripe for this kind of reporting going forward?

TWOHEY: Well one of the things that's been so inspiring is to see you know I'd say that it happened here at the New York Times but it happened across journalism is that coverage of sexual harassment became kind of a group project across our industry. So here at the New York Times, once the Weinstein story broke, our email inboxes and our phones were flooded with tips and people coming forward with stories about what was happening in their industry. So you know Jody and I were working with reporters across the newsroom from the sports desk to the culture desk to the business section, which I think is just an example of the fact that these stories have come out and are going to continue to come out across all industries.

BRODIE: Megan Twohey is an investigative reporter at The New York Times and his co-author along with her colleague Jodi Kantor of the new book, "She Said: Breaking the Sexual Harassment Story that Helped Ignite a Movement."