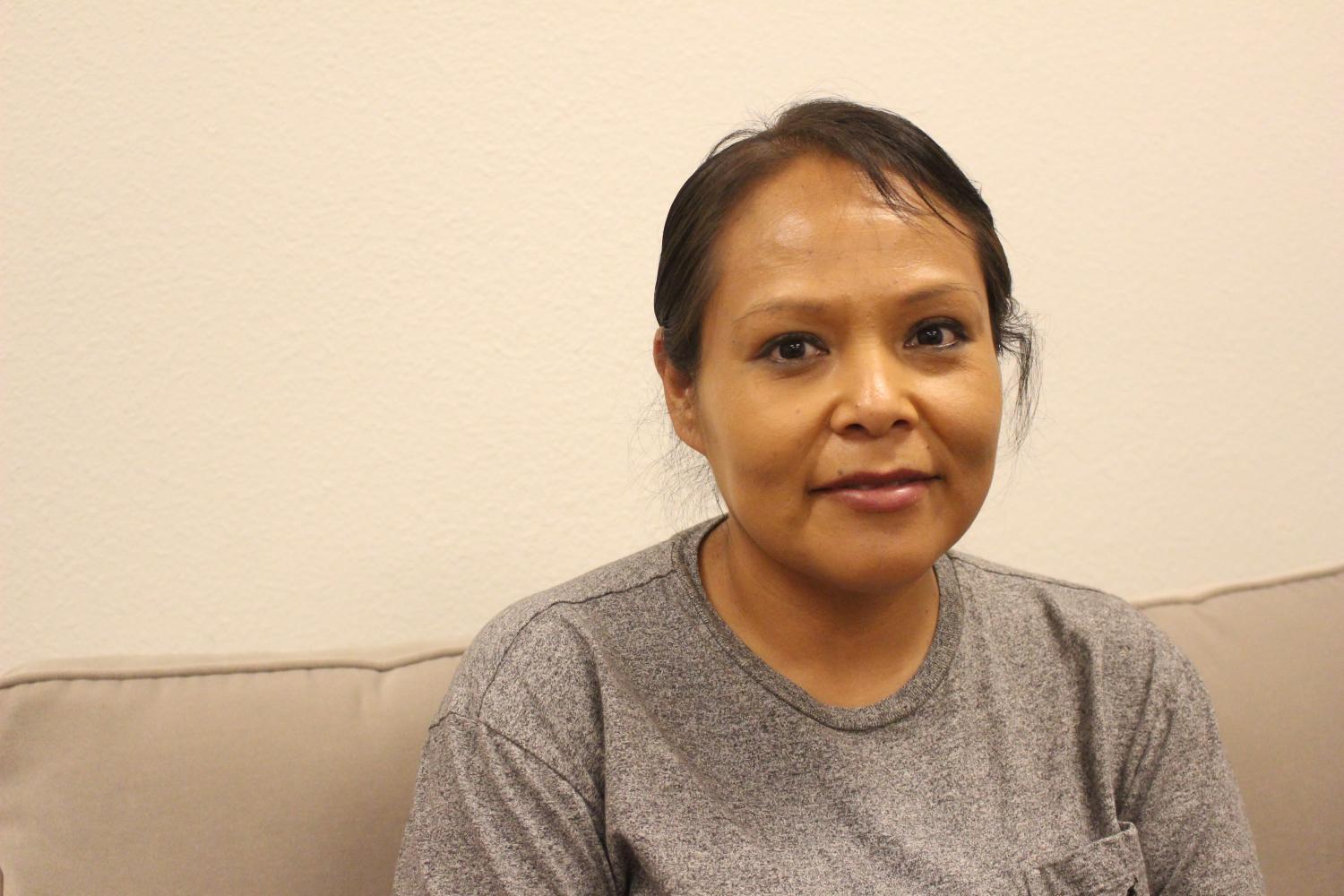 Bret Jaspers/KJZZ
Fleurette Nez of Phoenix has come to rely on the free dinners at St. Vincent de Paul to feed her two daughters and has also relied on the SNAP program since April.

A typical day for Fleurette Nez of Phoenix is to work a shift at a pharmacy, pick up her two daughters from a friend’s house and head to the nonprofit St. Vincent de Paul for dinner.

Last Monday was a bit unusual.

Her older daughter was dressed as Waldo, as in the character Where’s Waldo, for spirit week at her high school. She wore the outfit to dinner, and Nez teased her.

“She comes in with the glasses today here, and I’m like ‘take it off! Take it off, you’re not at school anymore,’” Nez said, laughing. “‘You’re embarrassing me.’ And she was like ‘Mom!’”

Nez’s laugh settled into a smile. “Yeah. I love my kids,” she said.

Nez has come to rely on the free dinners at St. Vincent de Paul and has also relied on the SNAP program since April. SNAP is Supplemental Nutrition Assistance Program, formerly known as food stamps. The program has been a source of support for Nez through a tough financial time. She had health problems, and then she put her second job — driving for Lyft — on pause after she had car trouble.

Nez’s financial situation can vary month to month, depending on how much overtime she works.  This in turn changes the amount she gets from the SNAP program. Overall, it’s helped her afford food and a two-bedroom apartment for her and her two daughters.

The Trump administration is proposing a change to regulations that would make it harder to get benefits under SNAP. More specifically, it changes how states let people qualify.

The rule change could affect 40,000 Arizonans, according to the Arizona Association of Food Banks. An analysis from the Robert Wood Johnson Foundation showed about 47,000, including about 22,000 children, 25,000 people with earnings, 10,000 elderly people and 1,000 people with disabilities.

U.S. Agriculture Secretary Sonny Perdue made the proposal this summer.

“What we found is some states are taking advantage of loopholes that allow people to receive the SNAP benefits who would otherwise not qualify and for which they are not entitled,” he said.

Here’s what he’s talking about:

Right now, states can let people qualify for SNAP if they’re eligible for non-cash benefits under a different program, called TANF, or Temporary Assistance for Needy Families. Income and asset limits for some non-cash TANF programs can be easier to meet than the federal requirements for SNAP. Over 40 states use this flexibility to enroll people in food assistance.

This is what Perdue called a “loophole.” The arrangement came out of welfare reform in the 1990s.

“If you receive those things, you don’t have to go through a separate asset test for SNAP or an income test separate from what you would do for those programs,” said Zaida Dedolph, policy director at Wildfire, an anti-poverty nonprofit.

The consequence for people in Arizona is they can get SNAP if they are enrolled in a TANF program and make 185% of the federal poverty line. There is also no asset test in those cases.

The new rule would make states adhere to the federal SNAP income level of 130% of the federal poverty line, and benefits would no longer step down as people’s incomes grow.

Dedolph said that could discourage working people from earning more if they’re right on the cusp.

“They would just automatically lose their SNAP benefits once they earn a dollar more an hour,” she said. And with the new rule, states would have to enforce a federal asset limit of $2,250 for most families. 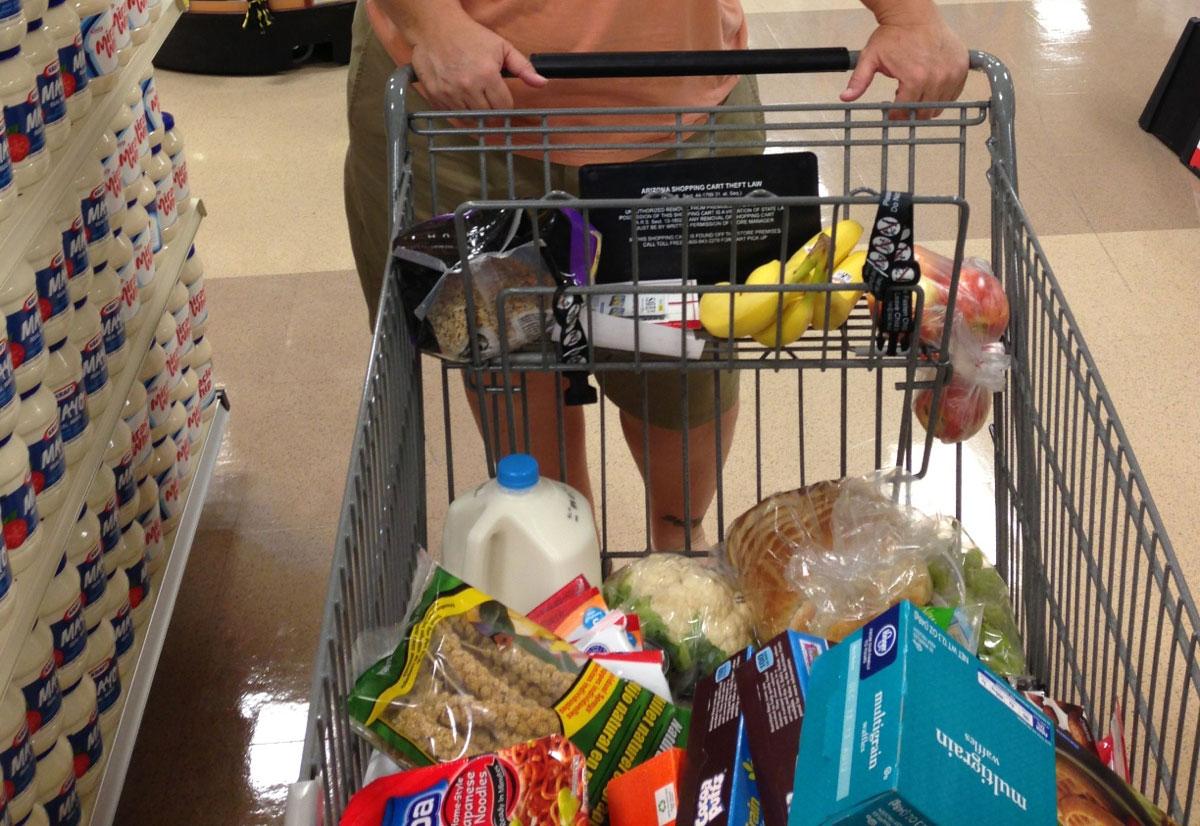 Nick Blumberg/KJZZ
The new rule would make states adhere to the federal SNAP income level of 130% of the federal poverty line, and benefits would no longer step down as people’s incomes grow.

Maureen McCoy, a lecturer at Arizona State University, said it’s not accurate to say lots of undeserving people are getting SNAP.

“In the research it shows that SNAP is very highly regulated in terms of all federal programs,” she said. “And we tend to focus on these one-offs where a very rich person happened to get SNAP in some type of random loophole. But that is like less than 1% of the population. The people that need SNAP are the ones who are getting SNAP right now.”

McCoy was referring to a Minnesota millionaire who made headlines after he received SNAP in his state.

The Trump administration estimates this new rule would save $2.5 billion a year and affect less than a tenth of current SNAP recipients nationwide. It would also require thousands of school children to enroll separately in individual reduced-cost school meal programs. Currently, a child enrolled in SNAP is automatically enrolled in a free school meal program.

Working people like Fleurette Nez, who makes $17.50 an hour, would be among the hardest hit.

“I’m a single parent, and I struggle, and this is gonna really hurt me if I’m one of the ones to actually have to just lose it, period,” she said.