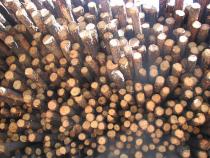 Courtesy of the U.S. Forest Service
Four national forests are working with the timber industry to prevent wildfires in Arizona.

The U.S. Forest Service seeks proposals to remove trees from wide swaths of Arizona's national forests. This is part of an ongoing effort to help prevent wildfires.

The largest wildfire prevention effort of its kind has stalled several times since the first company won a contract in 2012. The Four Forest Restoration Initiative, or 4FRI, is a public-private partnership between the forest service and the timber industry.

The Forest Service hoped to have 78 square miles of forest mechanically thinned each year, but only about a third of that has been done on average.

In this latest jump-start, the agency released a request for proposals to work on up to 1,278 square miles in parts of the Kaibab, Coconino, Apache-Sitgreaves and Tonto national forests.

The proposals are due Dec. 16. The contracts that can run up to 20 years will be awarded in April.