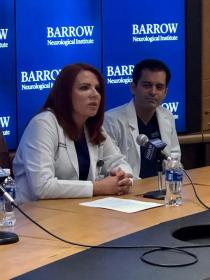 When it comes to Alzheimer’s disease, there is no cure and treatments are limited. In fact, it has been 15 years since the FDA approved any medication to treat the condition. But a new procedure could offer patients in the early stages of the disease hope.

It’s called deep brain stimulation, or DBS, and it’s not new. It has been used to help people living with Parkinson’s disease. But now doctors at Barrow Neurological Institute are testing DBS in patients with mild Alzheimer’s.

This is the third phase of this international clinical trial. Dr. Francisco Ponce is the director of the DBS program.

"And as many of you know, a phase three trial is basically the step before you ask the FDA to approve a therapy as a treatment for a condition," he said.

Ponce said based on the results of the Phase 2 trial that was completed a few years ago, Europe has approved DBS for the treatment of Alzheimer’s disease.

Dr. Anna Burke is the director of the Alzheimer’s and Memory Disorders Program.

"We really have limited treatments for Alzheimer’s," she said. "In fact, there hasn’t been a new treatment or a new FDA-approved medication for the past 15 years."

Burke said a previous Phase 2 clinical trial showed that the therapy was extremely safe and well-tolerated by patients. It also showed benefits when it came to cognition and function.