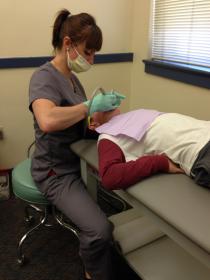 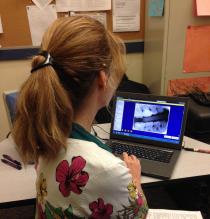 You’ve heard of telemedicine – but what about teledentistry?

A bill going through the Arizona Legislature would make it easier for dentists to reach patients who have never been treated.

“I had one cavity. Well, it was a root canal,” Olson said. “It really hurt every day until I went to the dentist. I didn’t even feel it but they just fixed it up and put a silver crown on it.”

Peterson works for a pediatric dental office and has the authorization to do cleanings without a dentist present. Four years ago, she came up with the idea to do the preventive dental work at schools around Prescott.

“My boss said he is willing to buy the equipment," Peterson said. "I’m willing to go in the school. We are just going to go from there.”

Peterson and a few other hygienists in Dr. Ryan Brown’s pediatric dental practice do cleanings at 20 schools around Prescott a few weeks a month.

“We have been able to reach a population that wasn’t really being reached because of their situation,” Brown said.

Brown said that situation can include cost, distance and even parents unable to take off work. These kids then become his patients.

Peterson is taking X-rays of each child’s teeth, which are immediately uploaded to the laptop and synced to the child’s file. These photos can be sent to the dentist when kids come in with emergencies.

“This kid’s in a lot of pain he’s complaining and here’s his picture," Peterson said. "And (Brown's) great about saying, 'OK, let’s get him in.'”

Peterson said many of the kids she sees at schools have never been to the dentist and have a lot of decay.

“Oral health is linked to whole body health. We see kids that don’t eat, aren’t doing good, are feverish for months," Peterson said. "We do their dental work, we get rid of all the decay, they are eating healthy, they are feeling better. They aren’t missing school.”

According to the Arizona Department of Health, more than 50 percent of children from low-income households have untreated tooth decay and 15 percent have urgent dental needs.

Brown said school visits aren’t about generating revenue. “The attitude that we have taken with the affiliate program is that - yes its sustainable in terms of covering its expenses. The only way we recoup the money or make it profitable is with the additional treatment we find,” he said.

But even then, Brown said since many of these young patients have insurance throught he Arizona Health Care Cost Containment System, he only gets reimbursed a percentage of the costs.

“It’s not only that we are getting paid a lower percentage of the production, because the hygienist is seeing the kids at school were being paid even less than if they would have come to the office,” said Brown.

Each school visit, the hygienists sees two pro-bono patients. The bill Arizona Sen. David Bradley of Tucson is pushing through the Legislature would require AHCCCS to reimburse teledentistry services at a rate similar to an in-person appointment. He hopes this bill will help bridge the gap in care.

As part of Peterson's school visits she teaches kids and parents about oral health.

The bill has passed the Senate and is now in the House.