iBuyer Beware: How Technology Is Changing The Housing Market In Arizona 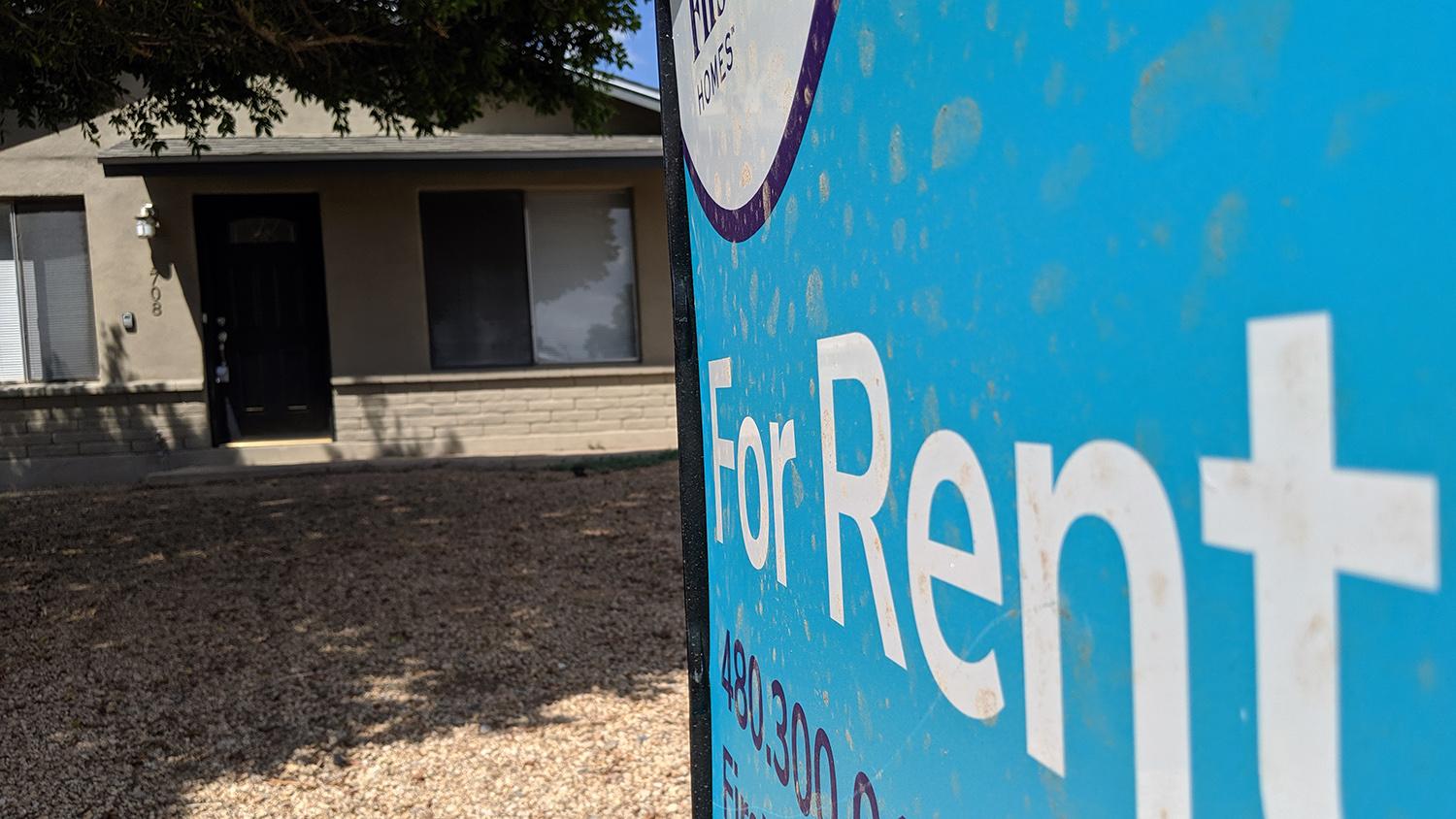 Sky Schaudt/KJZZ
A home for rent in north Phoenix in September 2019.

Buy or rent? Sell or stay? These are tough questions to answer for anyone, but especially tough in Phoenix where home prices are rising faster than anywhere else in the nation and there’s not enough homes available to keep up with demand.

Now, a new technology-driven process is selling homes even faster, drying up the market and driving up home prices even more.

It’s called iBuying, where real estate companies buy homes directly from homeowners with all-cash offers without an appraisal. It’s done on behalf of real estate investors who then bundle the properties for resale. And it is quickly gaining momentum in Phoenix.

"You’ve got the highest employment growth on a percentage basis of any of the large cities in the country. You’ve got low supply. You’ve got a lot of people moving there. So you have a lot of demand," said Gary Beasley, CEO and co-founder of Roofstock, an iBuyer company that purchases homes and then converts those properties into rentals.

After the Great Recession, institutional investors became some of the biggest buyers of foreclosed homes, buying properties at a discount and converting them into single-family rentals. Now, with foreclosure inventory shrinking, investors are turning to traditional home owners to stock up on houses by using iBuying technology.

She heard me talking about this story and said she just sold her house to an iBuyer and wanted to know more about it.

"I cross-referenced a bunch of the addresses and found out they were all then being rented out by the same rental management company," she said.

She found herself driving by to visit the house to see how it was doing after it sold.

"They’ve re-posted pictures, this First Key [Homes rental] company has re-posted pictures, and they painted the inside, and it looks really nice. And I saw how much they were going to rent it for. And it’s recently come off their website, so I assume they found a renter for it. And that took about a month," she said.

Schaudt says the process of selling this way was strange and felt impersonal.

But, Gary Beasley says iBuying should be embraced as a technology that brings power to the customer.

"The beauty of technology — it’s the ultimate democratization tool," he said and urged the real estate industry to catch up.

"Technology tends to evolve. I like to think of it kind of like toothpaste, kind of once it’s out of the tube, it doesn’t tend to go back in. But, if they ignore it, I think it’s at their own peril because others are going to be taking advantage of it," said Beasley.

But what exactly are iBuyers taking advantage of? The answer is convenience. The closings are fast and in all-cash, appealing to sellers who need the cash for the next down payment or even rental.

And that’s a potential problem — with Phoenix's population growth, the city has a critically low level of homes available for sale. iBuyers are quickly sweeping up much of what’s available, driving home prices up even more.

"The thing about the housing market. It is so inefficient. It goes in trends for years and years. Right now, it looks like it’s softening, so if it behaves like an inefficient market, you can predict that it will soften further," said economist and Nobel Laureate Robert Shiller.

Home prices in Phoenix are rising faster than in any city in the country, according to the latest S&P CoreLogic Case-Shiller Index. Shiller co-created the index and says caution should be the word of the day.

"If they don’t do the traditional market research by getting an appraiser to look at the house. If they’re going to buy it based on some computer program, they’re doing a risky thing. So, you have a potential catastrophe trying to buy homes using a computer program," said Shiller.

"We founded our company Case-Shiller-Weiss incorporated in 1991. Zillow and Trulia were both founded in 2006. They eventually beat us. But I’ll tell you — we thought of doing iBuying, buying houses based on a computer program and giving people quick access to a home sale. We didn’t try it. We thought it was too risky, too dangerous a business strategy," he said.

"So I think that we are not in as excited a period as we were before the financial crisis, where home prices got even higher than they are now, but there is a bit of excitement. We’re still human," said Shiller.

iBuying Is Also Changing The Process For Home Buyers

Heather van Blokland/KJZZ
Realtor Bea Kravitz and her client, Leah, stand in Leah’s kitchen in her recently sold home in the Coronado district on Phoenix.

Since online search tool Zillow started in 2006, at the peak of the housing boom, homes have been listed on the site and viewed mostly by phone or laptop. Buyers and sellers are used to home searches on the web and through web-based apps. Now, Zillow is getting into iBuying itself, capitalizing on its name recognition for home searches and adding this new iBuying technology to its services. It is catching on.

As of this July, Zillow ranked second in the number of these iBuying transactions after Opendoor, the nation’s largest iBuying company. Chandler-based Offerpad ranked third.

“I’ve been cruising the online search functions like Zillow and so forth, to see if I can find something,” said Leah, a home buyer (who asked to not use her last name in this story). We spoke at her house in Phoenix’s historic Coronado district.

“And I drove by this one, which is one I actually overlooked online. I’d say online there’s some interior photos I wasn’t really impressed by. But then when I saw it in person, the first thing that totally overjoyed me was the yard,” she said.

Leah is like a lot of buyers. She searched for a home online but then called an agent to see the house.

"So, that’s really the reason I started working with a particular realtor. ‘I need to get inside that house.' That’s what I’m thinking about really. I’m not thinking I want to work long-term with this person. It’s more ‘I want to get in there. I want to see that kitchen. I want to see the bedrooms,'” she said.

She did — and closed on a house after working with several realtors.

Shannon Quagliata was a Phoenix real estate agent for years. She says the time-consuming process of looking at homes is outdated. She created the first app in Phoenix that connects buyers with open houses.

“We’ve never been able to do that,” said Quagliata. She said her app helps buyers deal with the Valley’s inventory shortage by seeing homes not yet for sale — and that avoids a bidding war.

“So, if they are looking in a neighborhood that only has one house on the market and it’s their only option, but then they find out, well, this house is coming on the market in two weeks — it’s not on the market yet. Well, maybe we want to go see this house early and compare the two before we make an offer on this one,” she said.

I met up with Quagliata at the summer Phoenix Home and Landscape Show to see what kind of response she received. Mostly, the crowd was looking at home upgrades. Scott Creager stopped at Quagliata’s booth. I asked him about Phoenix real estate.

He was looking for ways to increase the value of his Sonoran Foothills home. He says he took a bath in the last housing crisis. So, it’s kind of a situation of, ‘Do I sell my home now, take the money and find something new? Or wait and just wait it out?' So, I don’t know. It’s kind of a — investment crapshoot," he said.

Jarred Kessler is founder of EasyKnock, a competitor to iBuyers. He said iBuying is not just an investment crapshoot, it’s a bad deal. He said local real estate values go down over time since homes are bought exclusively with all-cash offers. They are typically discounted offers and that means discounted home values.

"iBuying is effectively fancy house flippers," he said. "They’re buying someone’s home at a discount, and then they’re looking to flip it."

"The iBuyers in Phoenix alone, they’re doing 5% of the transactions in Phoenix. That’s a lot of money being taken away from the Phoenix economy and the consumers there," said Kessler.

I-buyer RedfinNow grossed $39.9 million in the first quarter of this year, a 343% increase in quarterly sales in one year. Its revenues rank fourth place behind Opendoor, Zillow and Offerpad. In August, Offerpad announced a new joint venture with Keller Williams to add iBuying services to all of Keller Williams’ offices nationwide.

On Thursday, Opendoor — which makes instant online offers to buy homes — announced it was acquiring national title and escrow company OS National. The purchase allows Opendoor to integrate title, escrow and closings into its online buying and selling experience.

According to the company announcement, the San Francisco-based start-up helps homeowners sell their house more quickly by offering to buy it from them. Sellers pay an average fee of 7.7% of the selling price to Opendoor and can schedule a closing in as little as 10 days, compared with 50 days for a traditional home sale closing. There are no showings, and any repair work can be handled by Opendoor and the costs deducted from the proceeds.

The company uses market data and software tools like machine learning to figure out how much it can make by buying, fixing, listing and then selling the home to another buyer. The houses are those typically priced between $100,000 and $500,000 and built after 1960.

Opendoor started iBuying in 2014. Chandler-based Offerpad followed shortly after. According to ATTOM Data Solutions, Phoenix remains the hub for the real estate model capturing billions of dollars from traditional transactions to create its own real estate tech economy.