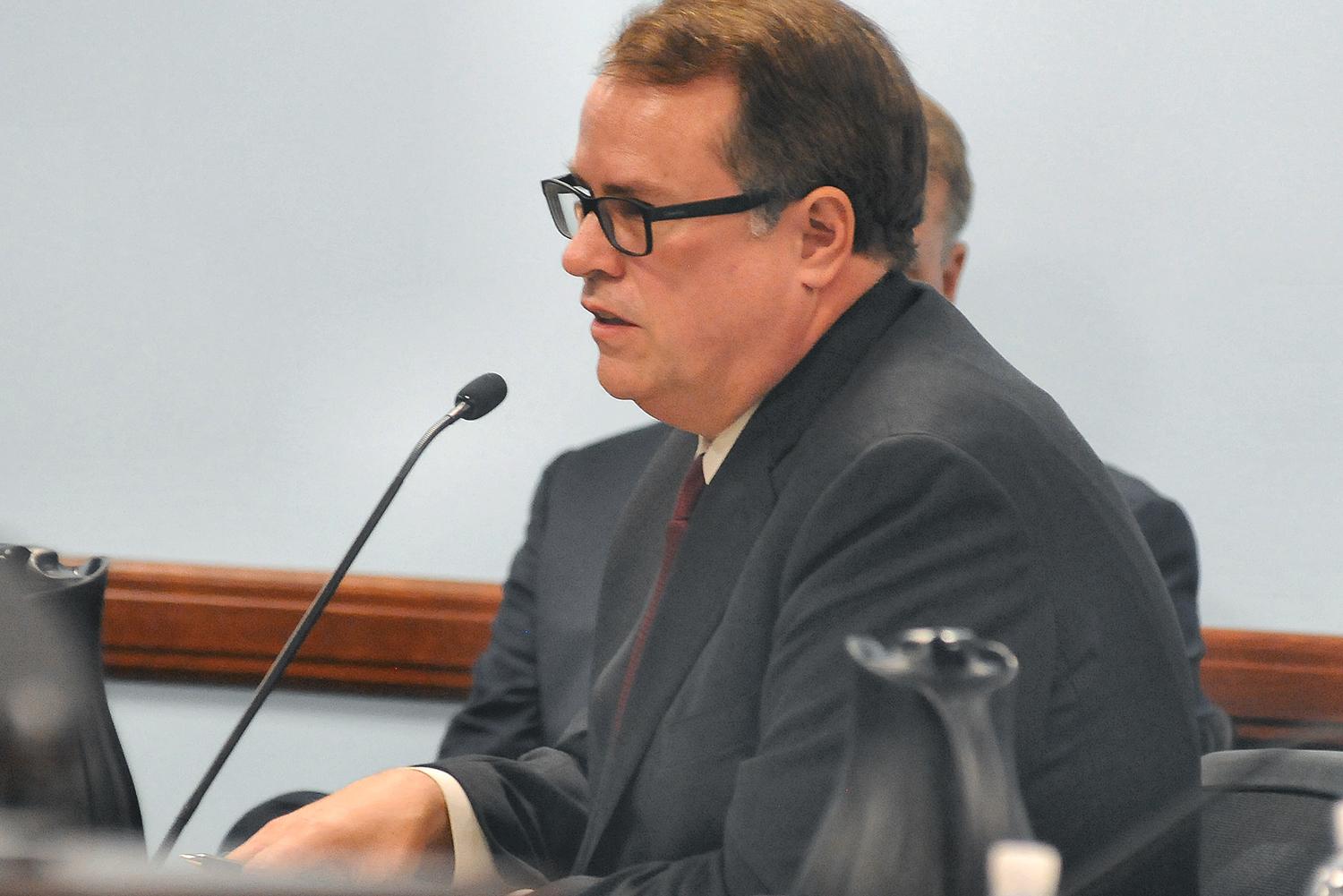 The incoming chief executive of Pinnacle West Capital Corp. refused Wednesday to promise that the company won't spend money in the future to elect Arizona utility regulators of its choosing.

Jeff Guldner told members of the Arizona Corporation Commission that he wasn't saying there definitely would be a repeat performance of what happened in 2014 and 2016, when the parent company of Arizona Public Service put a combined $15 million into campaigns to elect members of the panel. But Guldner, who currently serves only as APS president said he cannot give a firm answer because he does not take over from Don Brandt, the current Pinnacle West CEO, until Nov. 15.

That answer left commission Chairman Bob Burns unsatisfied, particularly as the commission is constitutionally precluded from barring APS or any other utility from getting involved in political campaigns. Burns told Guldner that he wants that commitment after he takes over — or else.

"I would suggest that if we do not receive that commitment from APS, maybe we need to change the way that we go about determining return on equity," the chairman said, suggesting that perhaps the entire board of Pinnacle West should come to the commission the next time APS requests a rate hike. 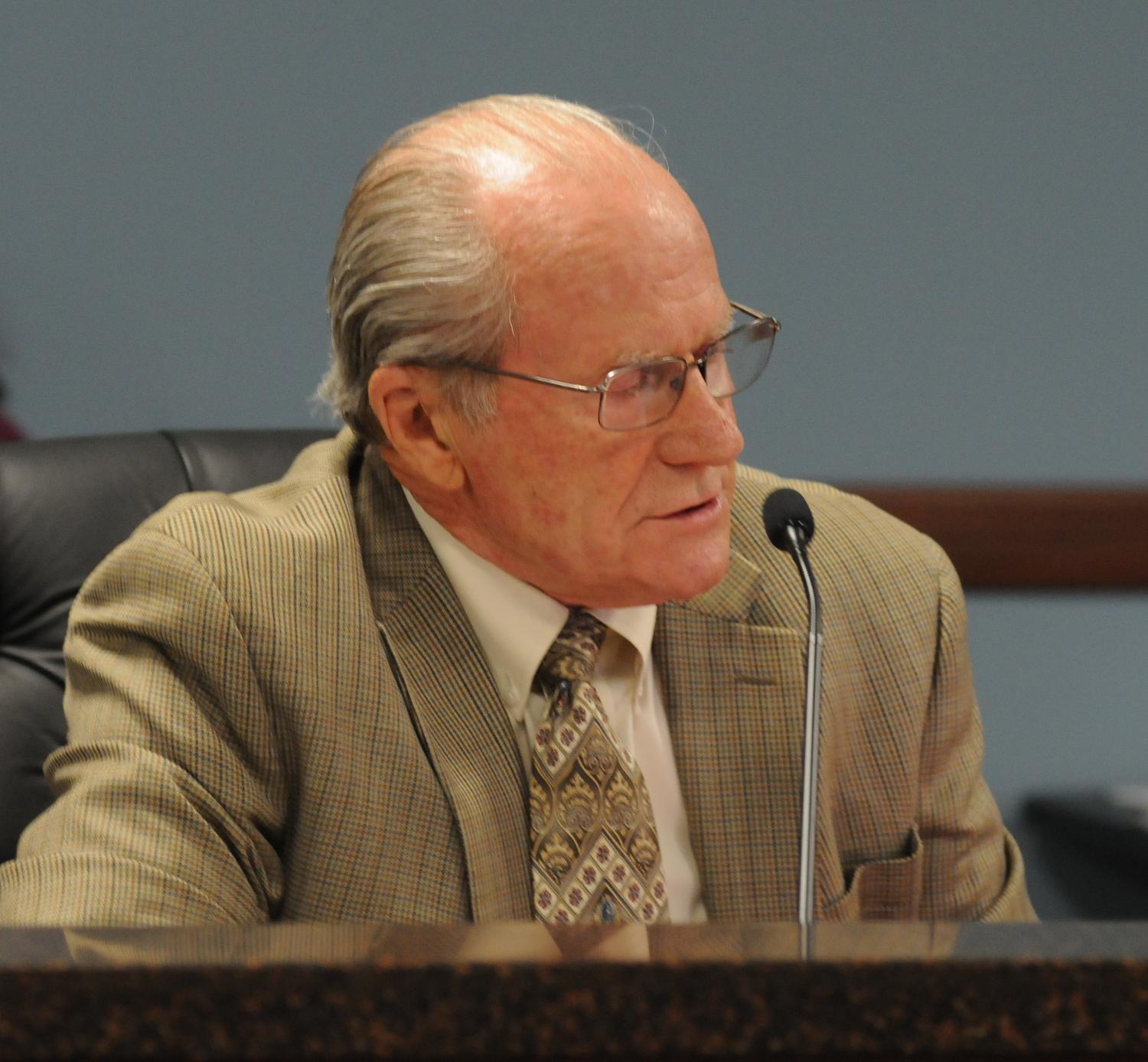 "I think we would have the opportunity to do a little negotiation and have a settlement right then and there."

Burns also charged that the political spending is part of a larger plan by Pinnacle West to "capture" the commission to ensure that it got the decisions the company wanted on issues like requests for higher rates. And he even charged that Gov. Doug Ducey has had a hand in the process, including the appointment of Andy Tobin to the panel, an appointment Burns said was very "disruptive."

"This is the first time we've heard a lot of these concerns," said gubernatorial press aide Patrick Ptak. He said the commission does its job and the governor does his, including filling vacancies on the commission as constitutionally required.

Tobin has since resigned to take a job in the Ducey administration, with the governor appointing Lea Marquez Peterson to replace him.

"I have no proof," Burns conceded later to Capitol Media Services. "But it smells."

Burns wasn't the only one with sharp comments about Pinnacle West — and specifically the way Brandt has run the company for the past dozen years.

"Your behavior is that of a kingpin who operates the company to mainly benefit himself," said Sandra Kennedy. You have, in essence, created a machine to purchase any and every elected official and defeat anyone in your way."

The daylong hearing was called in the wake of the discovery that a Sun City West woman had died last year of heat-related conditions after APS disconnected her power on a 107-degree day after the failure to pay $51 of a $176 bill. And there were several pointed questions about what commissioners saw as the failure to provide Stephanie Pullman with adequate notice.

But much of the discussion centered around the policies of Pinnacle West in spending money on elections.

Burns cited reports that showed Pinnacle West and APS had looked at plans as far back as 2009 to set up and fund "grassroots" organizations with the specific goal of convincing Arizonans that the decisions being made by the Arizona Corporation Commission were contrary to the interests of the public and ratepayers.

Then in 2013, company lobbyist Jessica Pacheco hosted a fundraiser at the Phoenix Country Club for Justin Pierce in his 2014 race for secretary of state at a time his father, Gary, was a commissioner. 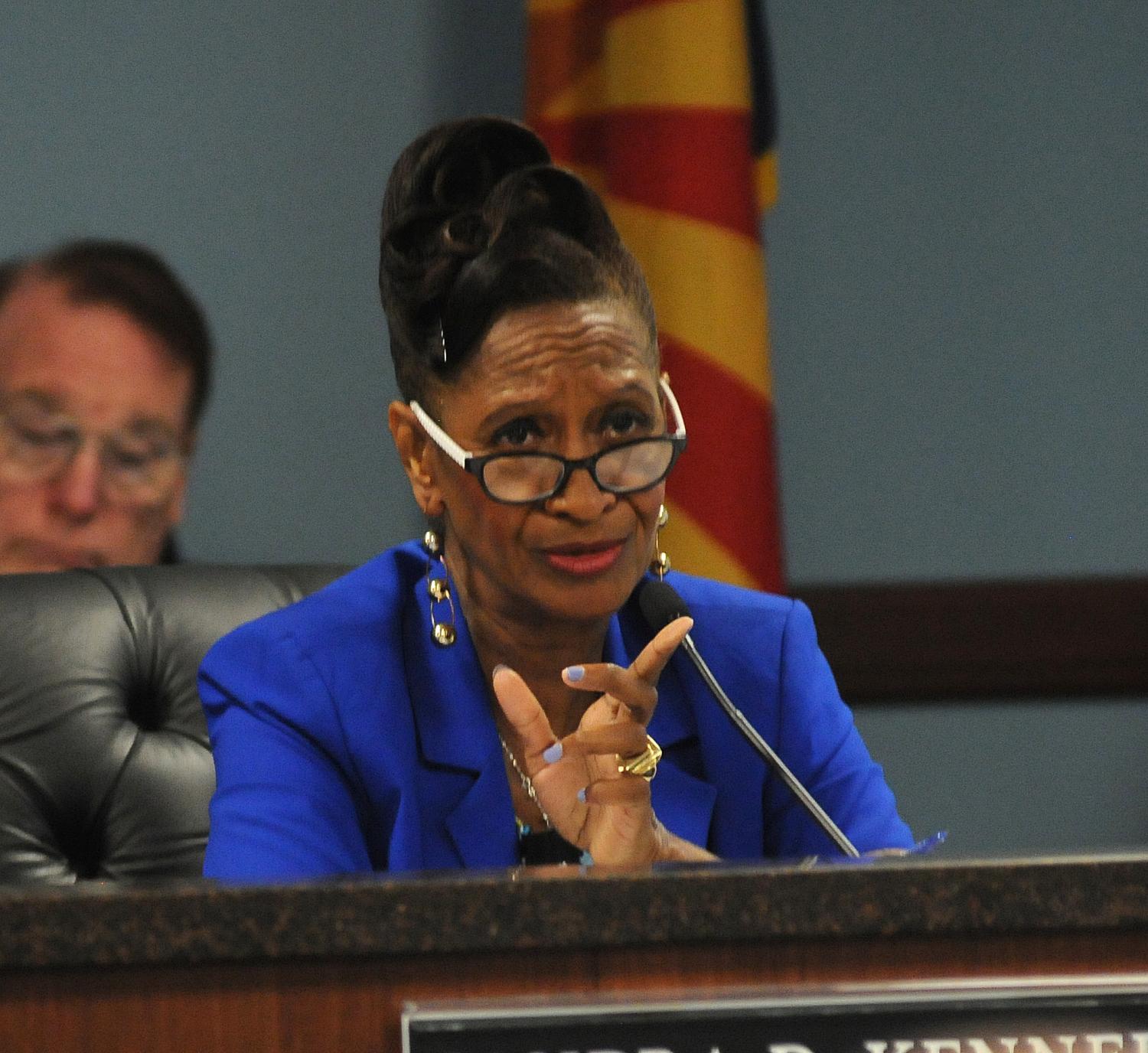 Brandt, for his part, said he saw nothing improper about the move, saying there was no money involved in getting the room and that if Pacheco had turned Pierce down he would have simply gone to another lobbyist.

That political involvement took a more concrete form in 2014 when Pinnacle West quietly funneled money through other groups, including the Free Enterprise Club, the Arizona Cattle Feeders Association and Save Our Future Now to undermine the campaigns of some Republicans who were seeking commission seats because they were supportive of requiring utilities to get more of their power from solar and other renewable sources.

All totaled Pinnacle West spent $10.7 million on that race, with the outcome being the successful campaigns of the two Republicans it backed.

Attorney William Maledon, who represents the company, confirmed Wednesday that an FBI probe into expenditures made in the 2014 race remain under investigation. He declined to provide specifics citing confidentiality requirements.

In 2016 the company was above board in the spending of $4.2 million to ensure the commission remained an all-Republican affair.

There was no reported spending on candidates in 2018, with Pinnacle West instead putting more than $30 million into a statewide campaign to defeat a ballot measure that would have mandated the use of more renewable energy.

Commissioner Boyd Dunn, like Burns, acknowledged the panel, by itself, is powerless to limit corporate spending on campaigns, even when it is by a utility to elect preferred regulators. But he said that's not an answer.

"Because it is legal it does not make it right," he told Brandt.

"Our utilities should not spend money electing their regulators," he said.

Company officials and their attorneys bristled when the questions got very specific about exactly what happened in the Pullman case.

The utility recently settled out of court with the family. And Maledon said family members have asked that the specifics of the case not become a part of the hearing on disconnection policies.

"We are regulators," she said. "We should know what happened."

And Kennedy told Maledon the company settled with the family to keep from having to answer questions. 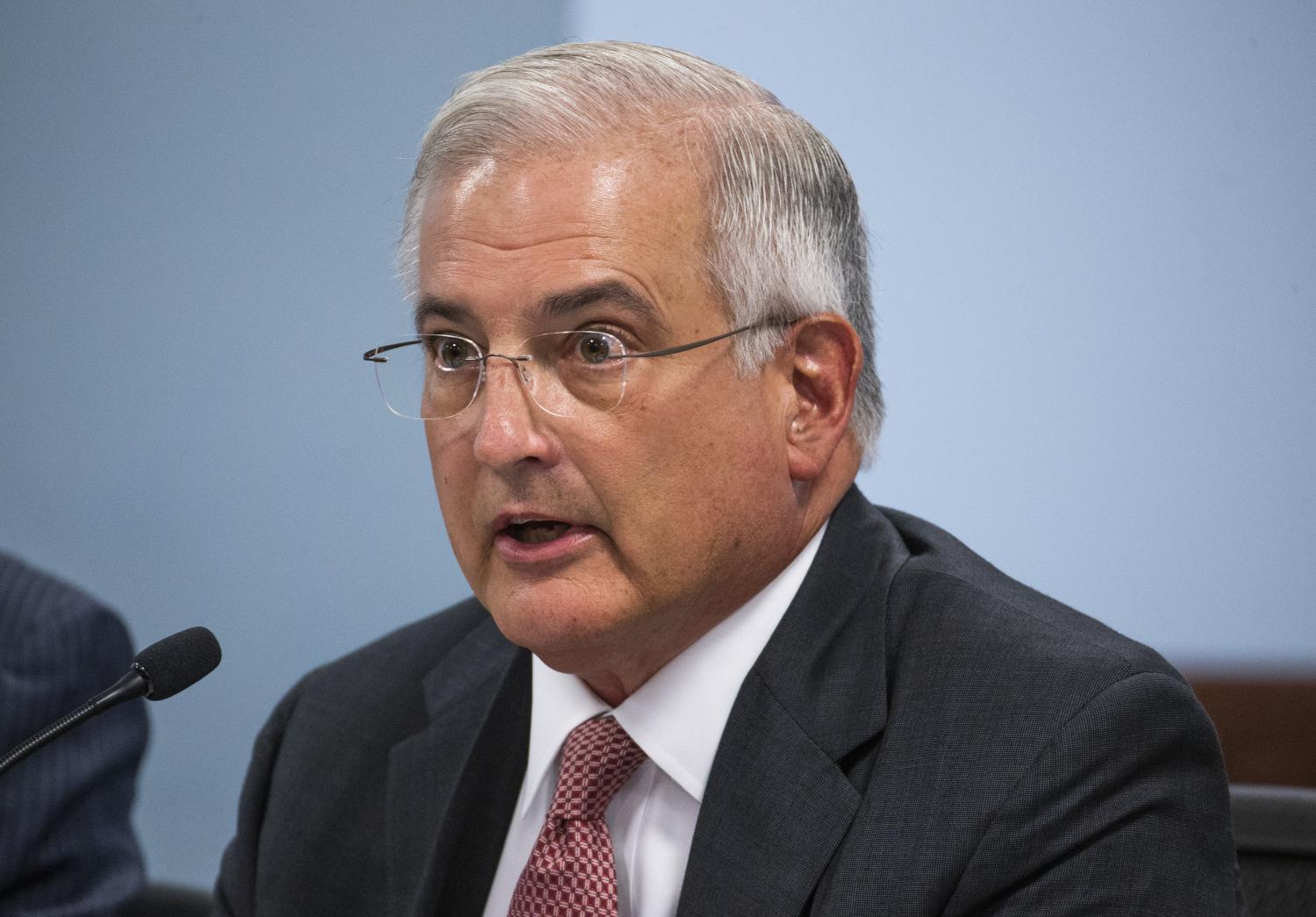 But some details did emerge.

Daniel Froestcher, an APS vice president, acknowledged that no one actually made personal contact with Pullman, instead leaving a notice on her front door. That annoyed Dunn.

"A lot of us in the summer are not using the front door," he said, instead entering the house through the carport. And Dunn questioned why no one actually bothered to knock on her door.

Froestcher told commissioners he used to do the job of contacting customers.

"On multiple occasions I had dogs unleashed on me," he said. "I was verbally threatened and, on one occasion, had a weapon pulled on me."

Hence, he said, the current policy. But that drew a skeptical response from Dunn, who questioned how likely it was that people living in what is largely a retirement community are a threat.

Froestcher said it's a system-wide policy, with APS serving customers in 11 of the state's 15 counties.

Brandt deflected multiple questions from Kennedy who complained about the rates and customer service.

"The reality is, for the vast majority of our customers, electricity is a bargain," he said, citing national figures that show the average household spends just 1.6% of its take-home pay on power.

APS had no similar figures for its own customers. But Brandt defended the charges.

"Research shows a vast majority of our customers are not concerned with their electric bill."

Brandt also defended company spending on things like sponsorships, like having the APS logo displayed at sports arenas.

"It projects a positive image," he said, telling commissioners that the cost of these — he provided no figures — comes from corporate profits and not from direct customer payments.

Arizona Republic reporter Ryan Randazzo attended the hearing, and he joined The Show to break things down.