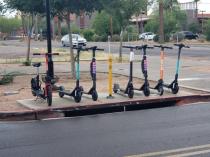 As Phoenix gears up to launch its pilot program for electric scooters, the council approved a contract with a company to pick up abandoned scooters.

The deal with Sweep Inc could be worth up to $99,000. Deputy City Manager Mario Paniagua told council members Wednesday that Sweep will be called when scooter companies fail to collect scooters parked in unauthorized areas within two hours.

“We will then charge the scooter companies an $80 fee for each scooter that’s collected that will be used by the city to cover those costs as well as any additional staff time that’s involved,” he said.

Paniagua said other fees should cover the full cost of the six-month program, which begins Sept. 16. About 400 scooters will be available to rent. People will be able to ride them from Seventh Avenue to Seventh Street and from Buckeye Road to McDowell Road.

The city will have designated parking locations within the boundary area, which is where scooters can be rented and returned. Phoenix will gather data on the number of rides, areas where scooters are more and less popular as well as accident information.

When the pilot program ends on March 15, 2020, the council will determine whether to continue the program, end it or make changes.