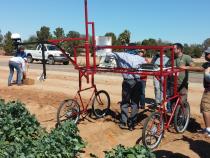 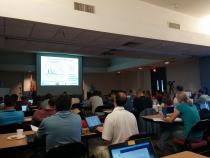 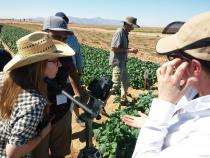 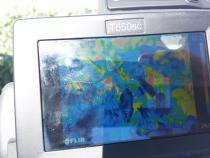 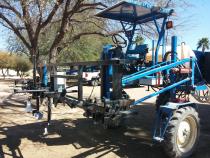 (Photo by Andrew Bernier - KJZZ)
One of the tractors loaded with all of the phenotype data collection hardware.

From a changing climate to more mouths to feed, there are many challenges facing agriculture to increase production. But a new technology developed and tested in Arizona may help farmers overcome recent struggles.

For most farmers, harvest size counts the most to sustain a business. But along with younger generation’s decreasing interest in farming, agriculture in the arid Southwest faces increasing challenges.

“Environments in 2050 are going to be hotter, more water scarce and unpredictably different in disease,” said Rick Ward, director of the Maricopa Agricultural Center operated by the University of Arizona. He said along with environmental stresses from climate change, the other big concern is coming from growing populations.

“By 2050, there are going to be nine billion people on the planet," said Ward. "So that represents a 25-, 30-percent increase, but we need 60 percent more calories in protein produced because of changing diets.”

But securing a large harvest isn’t easy and determining what makes a quality crop isn’t yet a science. Measuring crop quality has typically been done by sight, taste and some mechanics, but it can take decades of farming to develop a “good eye.” Pedro Andrade, a precision-agriculture specialist at UA, and said identifying healthier individual crops isn’t a sure thing and is time consuming.

“Traditionally, you have been dependent on people taking measurements," Andrade said. "And that can introduce biases, can introduce subjective errors. Whereas with an electronic system, if it’s properly calibrated, you can then control that source of error.”

That electronic system is known as high-throughput field phenomics. Phenomics is the study of phenotypes, which is the physical expression of genetic traits. And while individual plants in a plot of soybean, cotton or wheat crops can all look the same, they have slight variations in genetic sequence giving slight variance in their physical make-up. These variances, mostly invisible to the human eye, may be the secret to increasing higher yields. And the system can measure thousands of plants phenotypes in a few hours, something that took an entire season.

Out in the testing field, the center hosted researchers, professors and students along with government and business officials to try out the phenomic sensors.

While many at the workshop were older men in plaid and jeans, a new crop of agricultural student researchers were there to observe and test the new technology, including women and minorities.

“So it’s going to be like the new innovation," said Patama Hano, a University of Wisconsin student. "You know, technology in our field of phenotyping.”

The sensor technology gives instant quantitative data on plants, measuring the temperature of leaf surface, plant height and radiation reflection. The taller the plant and the cooler the leaf surface temperature, the better the plant manages stress from constant sun and decreased water. It is these traits researchers want to isolate for selective breeding to improve crop quality and yield.

Workshop participants were pushing a makeshift cart welded onto two bicycles straddling a couple rows of crops. Mounted on it, sensors dangled over the rows and began recording data.

“Pushing it I think it would cover a few thousand plots in about three hours,” said Jessie Polland, assistant professor at Kansas State

He wrote the National Science Foundation grant that funded the project which has gone international. While tractors have been the typical method of moving sensors, Polland said bicycle mounted models have been deployed to Mexico and India, but sharing the data has had some challenges.

“We’re working on building a whole data pipeline so you can upload data, provided the one hang-up is if your internet speed is fast enough," said Polland. "We’re kind of in the middle of nowhere on some of these field experiments."

So if global Internet connection can catch up to the speed of phenotype testing, sharing crop quality and yield data with many agricultural based countries may make feeding all those mouths more of a reality.