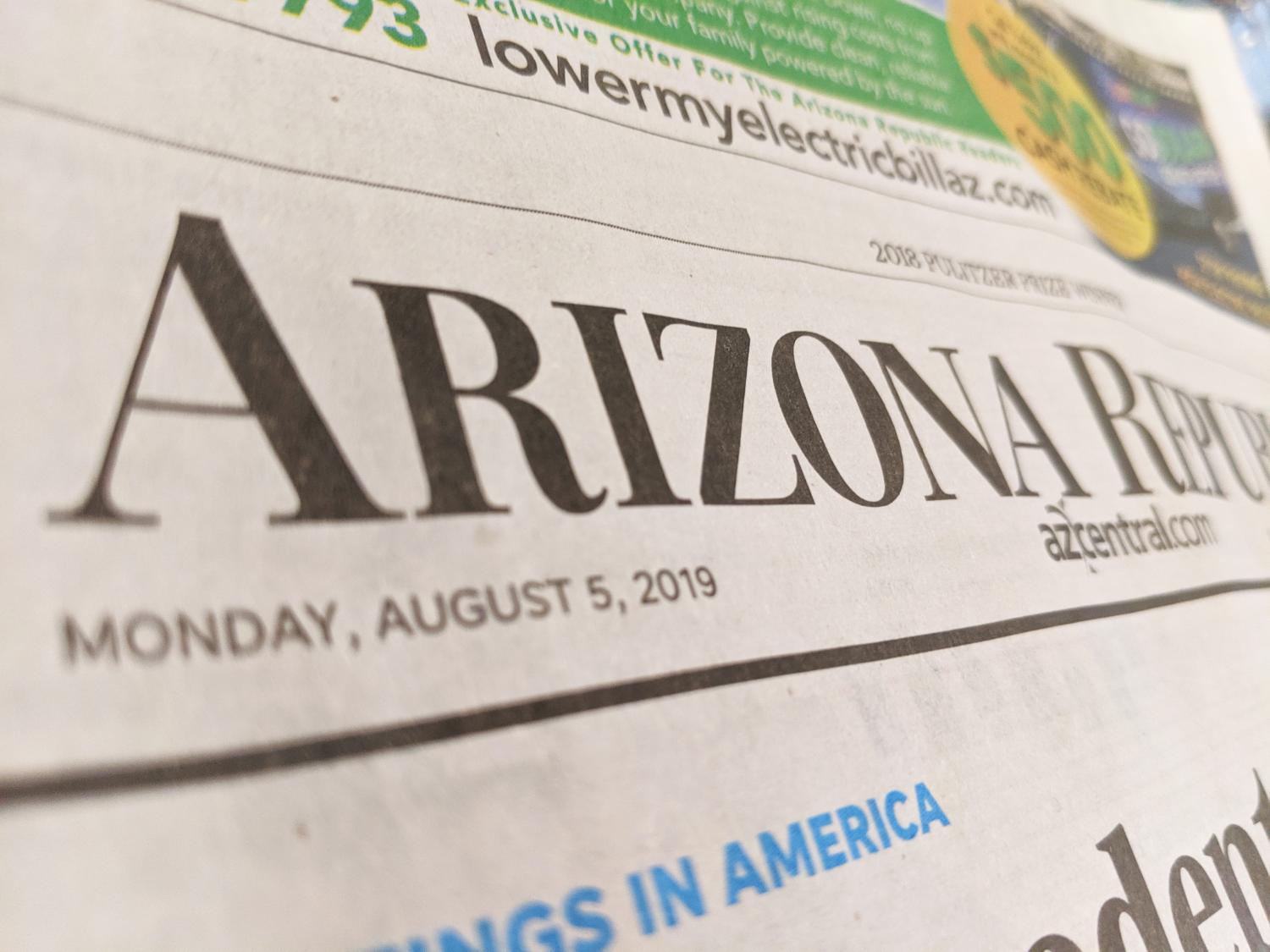 Sky Schaudt/KJZZ
The Aug. 5, 2019, edition of the Arizona Republic.

LAUREN GILGER: An effort to unionize the Arizona Republic's newsroom is underway and growing more public. In the latest development, an email from executive editor Greg Burton accusing pro-union staffers of tracking their co-workers were shared with news outlets — including KJZZ. Burton's statement against the alleged "organized surveillance," as he put it, led to denials by pro-union folks and additional accusations on social media against those working to move forward with the effort. The Show did reach out to Burton, as well as two of the reporters who commented on the situation on Twitter late last week. Burton and reporter Craig Harris declined to comment this morning. For the pro-union side's perspective, Rebekah Sanders joins us now to tell us more. Rebekah, good morning.

REBEKAH SANDERS: Thanks for having me.

GILGER: So, I want to start with a little bit of the broad picture, of the why behind this. So, why are you and other staffers right now looking to unionize at the Republic?

SANDERS: Well, thanks so much for having me. So I grew up in Arizona, and I grew up reading the Arizona Republic, and I've been there for 12 years. It's just a place that I love to work, because they really deeply believe in local journalism and what we bring to our community. But in the time that I've been there, our newsroom has been cut from about 425 journalists to about 130. So, we've got basically 110 journalists covering a metro area of 4.8 million people. This is not good for our community. We need strong local journalism to be investigating fraud, celebrating the beauty of Arizona, connecting people across this amazing state. And so there basically has been no one to stand up against these cuts. And so we decided a journalist in the newsroom that enough is enough. And we want to unite and work together to call for better working conditions and a stronger local newspaper.

STEVE GOLDSTEIN: So, is that effort what prompted the e-mail from Greg Burton? Because people would characterize that as inflammatory, to some extent, and fairly accusatory as well.

SANDERS: Well, we have faced increasing pressure from executives back 2,000 miles away at headquarters who are flying out here and holding meetings that we're required to go to, pressuring us and trying to intimidate us into not coming together. And it's unfortunate, but it is expected. This comes straight from the playbook. Companies don't want workers to come together, because they realize that we can demand better salaries, and more affordable health care, and at least a decent severance package when you're laid off. And that's all we're asking for. Also, it comes in the midst of what Gannett, our parent company, is trying to do — to create one of the largest media companies in the world, a huge merger with another company called GateHouse. And that is likely to bring further cuts. So we're asking just for a seat at the table, to be part of the decision-making process about our future.

Rebekah is not being honest. I was one of several @azcentral employees who was spied upon by my colleagues. I confronted these reporters as well as Rebekah, and she acknowledged union organizers were watching me and whom I was talking with.

GILGER: What about these accusations from the executive editor of surveillance, of some of the staffers who are not for the unionization effort? Craig Harris and Yvonne Wingett Sanchez made it clear on Twitter that they feel they have been watched.

SANDERS: Unfortunately, this is hyperbolic, but we understand that this kind of a movement there is going to be strong emotions. And this is a process that is going to require a lot of buy-in and education. And we're working with everyone in the newsroom to try to provide the information that they need to make the right decision for them. We have normal organizing conversations among the committee to say, "Hey, I'm gonna to talk to that person tomorrow," "This person is working crazy overtime and not getting paid for it" or "this person is making less than they made 10 years ago in their first job, what can we do to make this newsroom stronger?"

GOLDSTEIN: Rebekah, you mentioned the merger that is upcoming. Can you describe just the general sort of tension related to that and then what happens with what's going on now with the unionization talks? It sounds as though, in any place, there's gonna be tension. Has the atmosphere just gotten, frankly, toxic in some ways?

SANDERS: Well, here's the incredible irony here. In December, Gannett faced a potential hostile takeover from a hedge fund news company that has a track record of coming into newspapers, purchasing them and slashing them to pieces. Gannett did not want this hostile takeover and begged employees to stand up and cast their board election ballots against Digital First. We did that. We did exactly what they asked. We were successful in beating this off, and then Gannett turns around and announces that they have a deal with a private, equity-run media company that has a track record of slashing newspapers to pieces and says, "Oh, we're gonna merge with GateHouse." And so it just is, frankly, insulting that we've put everything on the line to make local journalism great in Arizona and to protect the company from greedy Wall Street investors. And this is what we're rewarded with.

GOLDSTEIN: Rebekah Sanders, of the Arizona Republic, thanks as always.